Bangladesh: Country overview
Bangladesh, with a population of over 162 million, is one of the world’s most densely populated countries. Located in south-eastern Asia, bordering India and Myanmar and boasting a capital called Dhaka, it is a secular, pluralistic, parliamentary democracy, ruled by Prime Minister Sheikh Hasina and President Abdul Hamid. The state religion is Islam but many citizens also adhere to Hinduism. Bangladesh signed the UN Arms Trade Treaty in September 2013, but ratification remains; it has, however, acceded to the UN Convention Against Torture.

In total, 995 military arms export licences were approved to Bangladesh between 2008 and 2017. 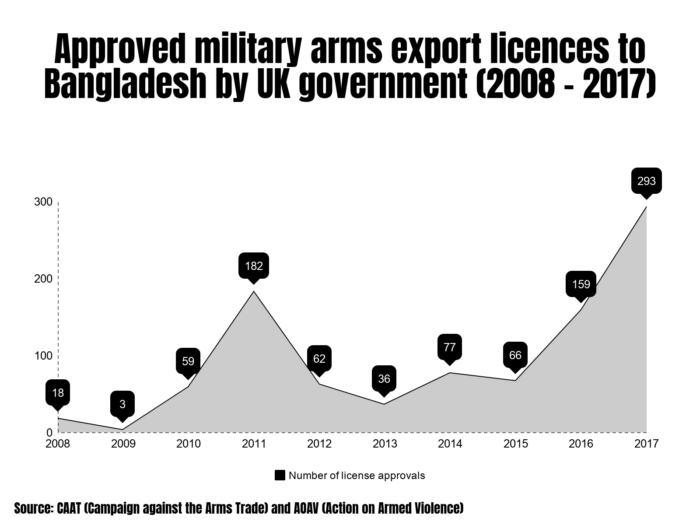 What is the total value of those exports in GBP?
The value of the arms exports to Bangladesh is marked by surges and plateaus over the last 10 years. It hit a high in 2013 when £13.4m of equipment for military use was sold to Bangladesh but dropped the next year to £0.4m. In total, from 2008 to 2017, £64.7m worth of licences were sold by the UK to Bangladesh. More than half (60%) of that was sold in 2017 alone, a year that saw a huge increase in sales. 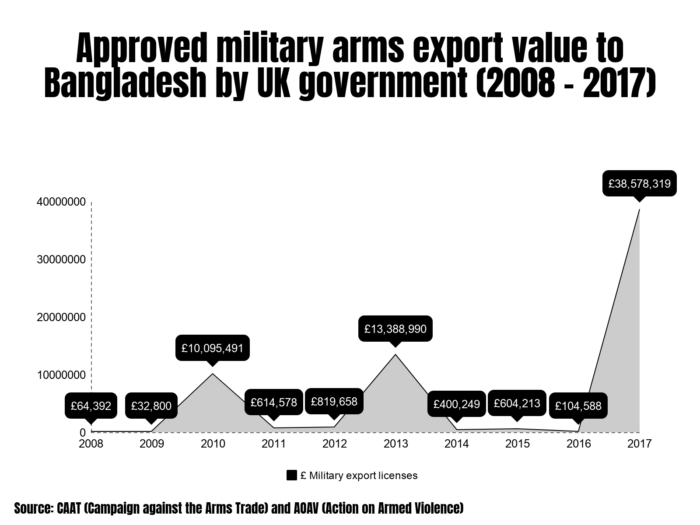 What are the top 10 types of arms export licences Britain is selling to Bangladesh?
Whilst the data given above is just for military exports (single-use), when you consider both military and dual-use exports (dual-licences are permits to control all the material, software and technology that can be used for civil purposes like humanitarian aid, but also for military goals) the top ten export items requiring licences are as below.
The most frequently bought type of equipment by Bangladesh from the UK between 2008 and 2017 was that of general naval vessel components, not surprising considering the country’s long coastline along the Bay of Bengal. Other equipment – from military helmets to small arms ammunition – is consistent with a country not expecting external war but attempting to deal with internal problems by bolstering their army.

Why should British citizens be concerned about arms sales?
The period 2010 to 2017 in Bangladesh has been marked by often-violent political suppression, disappearances perpetrated by government forces, and the use of force to crush dissidents and activists. In addition, child labour and the economic repression of minorities continue to be an issue.

According to the U.S. Department of State’s 2015 Human Rights Report, “the most significant human rights problems were extrajudicial killings and forced disappearances, the killing of secular bloggers and others by groups espousing extremist views, some restrictions on online speech and the press, early and forced marriage and gender-based violence, and poor working conditions and labour rights.”

This statement seems – more than most – to succinctly summarise the human rights situation in Bangladesh from 2010-2017. Countless incidents of extrajudicial killings, abduction, and torture have also been well-documented by human rights organizations, particularly Human Rights Watch (HRW) and the Bangladeshi human rights organisation Odhikar.

Despite such horror, according to CAAT (Campaign Against Arms Trade), around £65m of military export licences were granted to UK companies for selling their wares to Bangladesh during the past ten years.

While the number of arms exported to Bangladesh appears, at least according to public records, to be relatively minor, information has periodically surfaced that the UK may be assisting Bangladesh’s internal affairs as part of the War on Terror. Of particular note was alleged training provided to security forces that routinely commit human rights abuses.

Despite not being directly involved in any major conflict, Bangladesh has a significant conventional arms proliferation problem. It serves as a transit point for the transfer (both illegal and legal) of small arms throughout Asia, particularly between India and Bangladesh. The prevalence of small arms creates a destabilizing effect, adding to violence and corruption, making continued UK arms export a serious matter of concern, as it risks fuelling an already violent and unstable environment.

What has the British government said about these concerns?
The UK government has been critical of the Bangladesh government’s human rights efforts. The FCO wrote in 2015: “There was no improvement in the overall human rights situation in Bangladesh in 2015. Tensions between the two main political parties, the ruling Awami League and the Bangladesh Nationalist Party (BNP), remain unresolved. Confrontational actions during the first quarter of 2015, including the arrest of senior BNP leaders, an indefinite BNP-led transport blockade, and repeated hartals (labour strikes) impacted on people’s security and livelihoods.”

It added: “Looking ahead to the second half of 2016, we want Bangladesh to develop into an economically successful country that maintains its Bengali tradition of respect and tolerance for all people of all faiths and backgrounds. We also continue to be clear that an effective justice system, vibrant civil society, free media and freedom to hold the authority to account remain important as Bangladesh heads towards middle-income status, and fully graduates from least developed country status.”

The British government has expressed ambitions to strengthen its bilateral relations with Bangladesh after Brexit, focusing on supporting its human rights mechanisms and intensifying trade relations.

What evidence is there of human rights abuses that the Bangladeshi government have committed since 2010?

Events in 2010
Bangladesh’ human rights record was poor this year. Despite the government’s declared ambitions to prevent human rights violations, numerous reports surfaced concerning the regime’s widespread practise of extrajudicial killings and torture. Impunity for those responsible within the state’s security apparatus was widespread. Fundamental freedoms such as expression and assembly were also violated on a systematic basis. Political activists and journalists were subject to the regime’s suppression, sometimes leading to arrests and jail sentences.

Events in 2011
According to Odhikar, Bangladesh authorities applied Section 144 of the Code of Criminal Procedure, in which a magistrate authorizes the police to halt political gatherings or activities, at least 103 times. According to a survey conducted by Transparency International Bangladesh at over 6000 Bangladesh police precincts, bribes had to be paid in order to receive services from police roughly 80% of the time. Amnesty International also reported over 60 alleged extrajudicial executions within the first ten months of 2011, mostly performed by people in plain clothes identifying themselves as members of the Rapid Action Battalion (RAB) or police. Furthermore, diplomatic cables from the US revealed by Wikileaks alleged that officers from the UK had been secretly training members of the Rapid Action Battalion (RAB), an organization that since its inception in 2004 has conducted hundreds of extrajudicial killings. Prime Minister Sheikh Hasina, on 4th February 2011, admitted: “We have been trying our best to stop extrajudicial killings, which started in 2004… They cannot be stopped overnight.”

Events in 2012
Opposition BNP Leader Ilias Ali was allegedly abducted along with his chauffeur by government security forces on 17th April 2012. As of October 2018, there was still no information as to his fate. Ali is one of the reportedly over 400 BNP members that the party alleges have been “disappeared” by the government.

Finally, the government banned three NGOs from the country, France’s Doctors without Borders (MSF), Action Against Hunger (ACF) and Britain’s Muslim Aid, alleging that they were providing aid to “illegal” Rohingya refugees coming from Myanmar.

Events in 2013
Again, Amnesty International reported that extrajudicial executions took place, mostly performed by people in plain clothes identifying themselves as members of the Rapid Action Battalion (RAB) or police. Moreover, in the last two weeks of 2013, 19 supporters of the Bangladesh Nationalist Party (BNP) disappeared. Human Rights Watch documented their individual cases and, as of July 2017, had verified that all the individuals’ whereabouts were still unknown. Witnesses and family members stated that individuals claiming to be from the RAB or other security forces detained the 19 men, but that police either flatly denied the disappearances or only permitted family members to file “missing persons” reports.

During protests in response, Human Rights Watch documented 18 separate incidents in which protesters and bystanders were killed by security forces using live ammunition. Although the Bangladeshi government assured the UN Human Rights Council in a February 2013 submission that it would investigate “every incident of use of force or exchange of fire by police,” as of June 2013, it did not appear that a single investigation had been opened.

Human Rights Watch documented several acts of violence and repression against the media during this year that were either perpetrated, sanctioned, or tolerated by government security forces. Most notably, on February 12, the offices of The Daily Naya Digantawere burned down by a mob of youths while 20 police officers watched, and several newspaper employees were arrested for undefined reasons.

Events in 2014
Despite a peace accord being reached between the Bangladesh government and indigenous people in 1997, human rights organisations report that the Chittagong Hill Tracts area, where most of Bangladesh’s indigenous people reside, was still heavily militarized. In addition, the forceful settlement of Bengali had continued: Bengalis now made up over 47% of the region’s population.

Events in 2015
2015 saw mass demonstrations as a reaction to the Bangladesh Nationalist Party’s boycott of national elections the previous year. The demonstrations were met with excessive use of force by security officials and freedom of expression was seriously suppressed. Human rights Watch reported that among the police’s misconduct of civil society members were killings, “disappearances,” and arbitrary arrests – again very few of these crimes saw legal consequences of those responsible. Violations of freedom of expression were also felt by bloggers and critical voices, who would be subject to state-sponsored harassment, hacking and unfair trials.

Events in 2016
Human Rights Watch and Odhikar said that, of the 90 people who were disappeared presumably by the government, 21 were reported killed. The Asian Legal Resource Center (ALRC) stated that enforced disappearances were being primarily conducted by the RAB, the police, and the Detective Branch (DB) of the police. At least 32 people were targeted and killed during the year by armed Muslim groups, including secular activists, LGBTI people and religious minorities. The government’s response included numerous instances of human rights violations.

Events in 2017
Police reportedly attempted to make Facebook require its users to verify themselves using government-issued documents, in an attempt to increase online control and censorship. Although Facebook rejected the proposal, the social media company has provided the government with data related to criminal cases since 2015. Currently, the Bangladesh judiciary can prosecute any person for their posts in social networks if they are considered fake, obscene, and defamatory; or if the publications “tends to deprave and corrupt” its audience, according to the Section 57 of the ICT Act. As a result, the Police has submitted more than 1200 charge sheets between 2013 and April 2018, most of them under section 57 of the ICT Act, according to HRW.

Despite this catalogue of harm, the UK still deems it acceptable to sell weapons and arms to the Government of Bangladesh.  Human rights abuses continue.