Burundi: Country overview
The land-locked, east African country of Burundi has a population of approximately 10 million and is bordered by Rwanda, Tanzania and the DRC. Burundi is a presidential representative democratic republic and the country’s president, Pierre Nkurunziza, has been incumbent since 2005.

Burundi signed the Arms Trade Treaty in June 2013, but has yet to ratify it. Burundi has acceded to an array of other international conventions, including the UN Convention Against Torture. 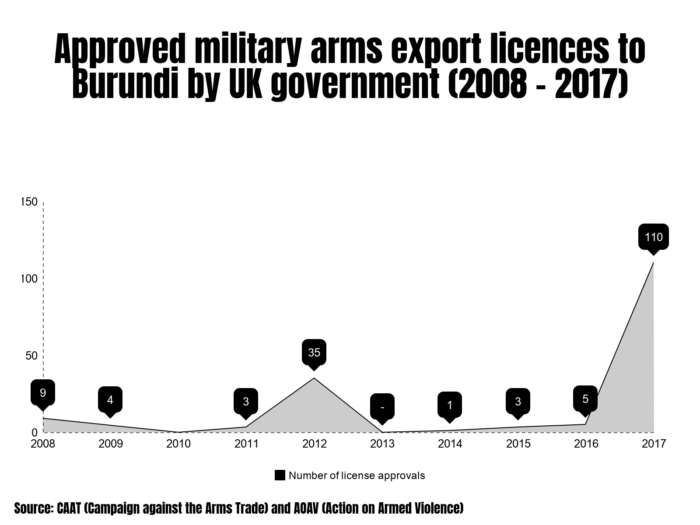 What is the total value of those exports in GBP?
As seen below, the value of licences exports to Burundi has been relatively small. No year has reached higher than £0.3m. Though the value of arms exports generally correlates with the number of approved licences, 2016 is an exception. In 2016, the UK approved £0.2m worth of military arms exports to Burundi There was a peak in 2012 when £0.82m of licences were exported to Burundi, though only having approved 5 licences. 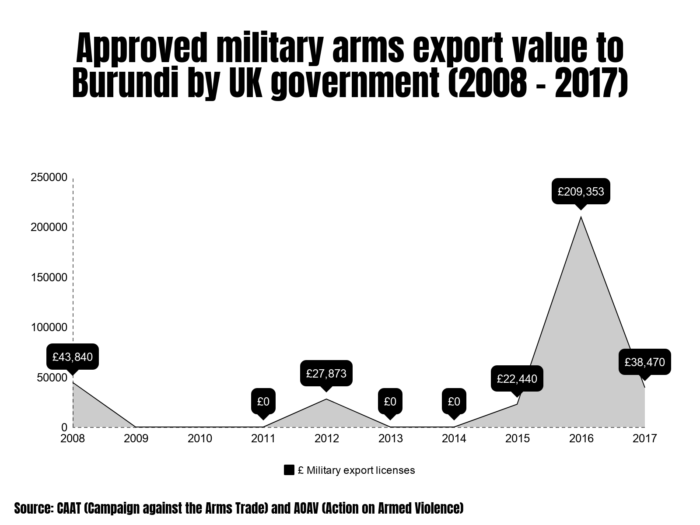 What are the top 10 types of arms export licences Britain is selling to Burundi?
Whilst the data given above is just for military exports (single-use), when you consider both military and dual-use exports (dual-licences are permits to control all the material, software and technology that can be used for civil purposes like humanitarian aid, but also for military goals) the top ten export items requiring licences are as below.
By far the most frequent type of equipment bought by the Burundian government from the UK is that which employs cryptography.  This is a broad category but it covers some offensive cyber capabilities. The next most purchased categories are that of cryptographic software and information security equipment, both that give capabilities to a government to spy on citizenry and opponents.

Why should British citizens be concerned about arms sales?
Burundi has a serious record of human rights violations, which several times have been condemned by the international society. Most recently, the European Parliament adopted a resolution where it denounced the “intimidation, repression, violence and harassment of journalists, opposition supporters and human rights defenders” in Burundi.  Targets for these abuses included Burundi’s remaining independent media. Despite the squeezing of civil society space, local reporting of human rights abuses continued under extremely challenging circumstances.

Furthermore, several members of Burundi’s political opposition have been forced into exile. Harassment and intimidation of opposition party members and supporters continue systematically on the political arena. One of the latest cases of concern was the arrest of FEDES-SANGIRA party president Gervais Niyongaboin September 2016.

In 2017, a UN Commission of Inquiry on Burundi described ill-treatment, insults, sexual violence and summary executions. Testimonies illustrate the cruelty and brutality of the perpetrators, most often members of the Burundian national intelligence services (SNR), police, military and Imbonerakure. As it was stated before, Imbonerakure has been one of the main tools for repression, together with the official security force.

International Federation for Human Rights said that “the strengthening of the Imbonerakure role inside the regime shows both radicalisation of the militia members and a growing ideological radicalization of repression by the authorities themselves. Thus, the security bodies no longer have a monopoly on repressive violence, which is increasingly delegated to an armed, trained and ideologically supervised partisan militia.”

With a government like Burundi’s, it is a significant concern that the UK government permits the Burundi regime to be supplied with advanced spying equipment that risks being used against citizens who exercise their freedom of expression.

What has the British government said about these concerns?
Burundi is listed on the UK Foreign Office’s “human rights priority countries”, which lists 30 countries with the most serious concerns relating to their human rights records. The UK government has been, in particular, outspoken about the human rights abuses of the Burundi government.

In 2015, for instance, the FCO stated: “The human rights situation in Burundi showed no signs of improvement during the second half of 2016, despite claims by the Burundian government of normalised circumstances. The pattern of arrests, unlawful detentions, torture, enforced disappearances and killings continued.

Nonetheless, despite such stated concerns, the UK government has continued to approve arms sales to the Burundi government.  It also has been training government forces in Burundi, according to the UKGov website. The UK supported the funding and construction of a rapid deployment headquarters for the Uganda People’s Defence Force (UPDF), which also covers Rwanda and Burundi. Future aims are to sharpen the focus on Burundi’s forces and plans are underway to construct a mock combat-training village.

What evidence is there of human rights abuses that the Burundi government have committed since 2010?

Events in 2010
After a respite in recent years, July 2010 saw a resurgence in torture by the National Intelligence Service (SNR) in the run-up to and the aftermath of the national elections. Those tortured included members of opposition parties arrested on allegations of threatening state security in relation to a series of grenade attacks. After reports by the UN and the diplomatic community to the Burundian Government about the torture, reports to Amnesty ceased, despite the government denying it was taking place.

UN human rights monitors recorded 40 extrajudicial executions in 2010 in which Burundi’s national intelligence service (SNR), the National Police of Burundi (PNB) and the National Defence Forces (FDN) were all implicated.

Events in 2011
Amnesty International proposed a Truth and Reconciliation Commission to address the policy of impunity and to ensure justice for victims on all sides following years of conflict. The government agreed to this, but there has been slow progress, with civil society, in particular, raising doubts about transparency.

Again, UN human rights monitors recorded 61 extrajudicial executions in 2011 in which the SNR, PNB and the FDN continued to be implicated. Moreover, Amnesty International said that 42 killings, which might have had political motivations. Victims included members of oppositions parties such as the National Liberation Forces (FNL), the Movement for Solidarity and Democracy (MSD), and members of the ruling party, the National Council for Defence of Democracy-Forces for Defence of Democracy (CNDD-FDD). UN monitors also reported about 36 cases of torture and 37 cases of cruel, inhuman or degrading treatment. None of these, however, were investigated.

Events in 2012
Human rights defenders and journalists who reported about violations to the Truth and Reconciliation Committee faced increased repression. There was also a lack of witness protection, preventing victims from testifying freely, and there was continuing impunity for the SNR and the Burundian National Police (PNB). Because the Burundian Government had so far failed to sign the 2008 Operational Protocol to the Convention against Torture, the establishment of a national preventive mechanism against torture and facilitation of a stronger international monitoring was complicated. 11 further cases of torture were reported by UN monitors, and investigation still remained.

Events in 2013
A draft press law to severely limit the activities of journalists was debated by the Burundian Senate. It attempted to make journalists criminally liable for carrying out their work, to introduce new press-related crimes and exorbitant fines for those who violate its provisions.

Articles 17, 18 and 19 of this law created numerous new requirements. Many of these were overly broad and could, therefore, be used to prevent the exercise of the right to freedom of expression. Article 19 – for example – restricts the right to report on anything that relates to state and public security, information that threatens the national economy, or insulting the President. Other provisions introduce circumstances in which journalists must disclose sources. Fines may be as high as 8,000,000 Burundian francs (approximately US $5,000), which many media outlets said they would be unable to afford.

Events in 2014
In the build-up to the 2015 presidential, legislative and communal elections, Amnesty International documented an increase in harassment and intimidation of critical voices by the regime, arbitrarily denying groups authorisation to hold meetings and demonstrations, political opposition groups, the press, the Burundian Bar Association and civil society organizations.

Members of the Imbonerakure, the youth wing of the CNDD-FDD, were perpetrating human rights abuses under the pretext of maintaining security at a local level. “The Imbonerakure intimidated political opposition members, prevented political party meetings from going ahead and attacked members of the political opposition with impunity”, said Amnesty International. However, the Government of Burundi denied such allegations and refused to initiate an enquiry into them.

Events in 2015
On 25 April, the CNDD-FDD announced that the incumbent President, Pierre Nkurunziza, would run for a third term in the 2015 presidential election. The announcement sparked protests by those opposed to Nkurunziza seeking a third term in office, which was deemed unconstitutional.

On April 26, popular demonstrations started and developed into a low-intensity conflict that was to deeply affect the country. Nkurunziza mobilized loyal security forces to repress alleged opponents to his regime. While armed opposition groups armed and formed themselves in order to attack individuals viewed as affiliated to the CNDD-FDD.

Events in 2016
The government targeted opponents with more brutality than in previous years, according to HRW. At the same time, human rights organizations increased their pressure and led the government to change its modus operandi. The International Federation for Human Rights(FIDH) reported that the government continued the repression underhand with “secret locations for detention and torture, covert executions, enforced disappearances, concealment of bodies in cemeteries, the muzzling of the press and of NGOs, propaganda attributing these crimes to the armed opposition, etc.”

Besides, the regular forces might be working with the Imbonerakure to repress those considered in the opposition. “They arrest, torture and commit extrajudicial executions. They conduct repressive actions against civilians, disseminate the pro-Hutu ideology of the ruling party”, said FIDH.

This year, Burundian authorities suspended cooperation with the United Nations. The ongoing crisis and the involvement of a substantial part of the army in the serious human rights violations that have been committed raise the issue of the Burundian army’s participation in UN and African Peacekeeping missions in Somalia and the CAR.

For all of those violations, the UN created The Commission of Inquiry on Burundi on 30 September 2016,  to investigate the abuses committed in the country since April 2015, and to identify alleged perpetrators.

Events in 2017
Burundi became the first country ever to withdraw from the International Criminal Court (ICC), while systematically repressing its population and commit crimes of the most serious nature. Also, this country was listed at the 160th position out of 180 in the 2017 Reporters without Borders (RSF) World Press Freedom Index.

In its report, the UN Commission of Inquiry on Burundi explained that crimes against humanity, such as extrajudicial executions, arbitrary arrests and detention, torture, sexual violence, and enforced disappearances, have all been committed since April 2015.

Since 2016 it was also reported that at least 1,200 people have been killed. There have been 400 to 900 victims of forced disappearances. Several hundred, or even thousands, of individuals, have been tortured. And more than 10,000 are still victims of arbitrary detention. In the hope of escaping political violence, around 400,000 Burundians have fled and are refugees in neighbouring countries. The majority of the human rights violations have been committed by the Burundian Security Forces and militias that operate under their control and affect the civilians first and foremost.

For all of those abuses, the UN Commission asked the International Criminal Court to open an investigation into the crimes committed in Burundi “as soon as possible”, and also asked the African Union to retake the initiative to find a lasting solution to the crisis in Burundi.

Despite this catalogue of harm, the UK still deems it acceptable to sell weapons and arms to the Government of Burundi.  Human rights abuses continue.