Colombia: Country overview
Colombia is located in northern South America and has a total population of around 50 million; Bogota serves as the capital. Colombia is a presidential democratic republic, and the president is both the head of state and government. Iván Duque was elected the country’s president in August 2018. Colombia has a history of decades with internal conflict between government forces and Revolutionary Armed Forces of Colombia (FARC). A historic peace agreement was reached in 2016, but the fighting has persisted, largely at the expense of civilians.

Colombia has signed the Arms Trade Treaty in September 2013 but is still yet to ratify. However, this country has acceded to a range of international treaties, such as the UN Convention Against Torture.

How many licences for the sale of arms to Colombia has the UK issued between 2008 and 2017?
As seen below, the number of weapons licences granted by the UK government to the Colombian government has risen significantly in recent years. By 2013, the number of military licences had reached 122 and in 2017, after a decrease over 2014 to 2016, it spiked again at 152. 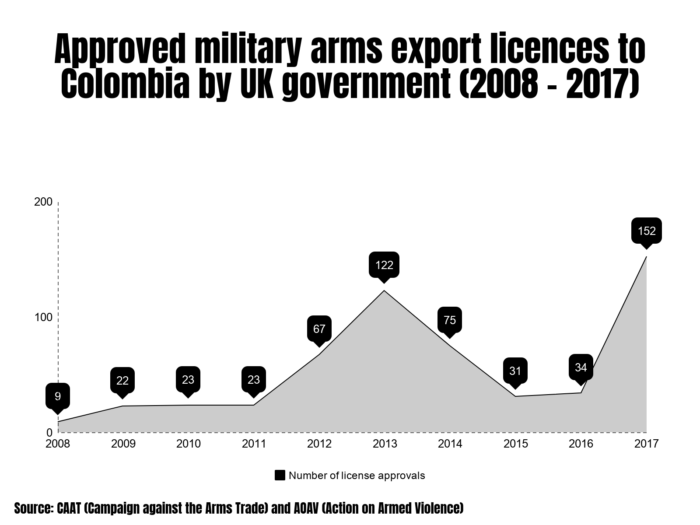 What is the total value of those exports in GBP?
The value of military arms exports has been steadily rising in the last decade, ignoring the drastic rise in 2013, when the value reached £14m. 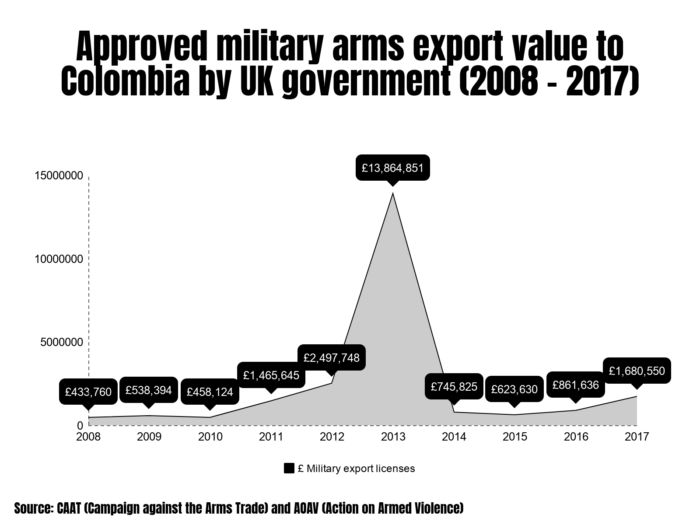 What are the top 10 types of arms export licences Britain is selling to Colombia?
Whilst the data given above is just for military exports (single-use), when you consider both military and dual-use exports (dual-licences are permits to control all the material, software and technology that can be used for civil purposes like humanitarian aid, but also for military goals) the top ten export items requiring licences are as below.
During the past decade, equipment employing cryptography was by the far the most frequent licence granted. The other most frequent licences are typical of a government fighting a civil war.

Why should British citizens be concerned about arms sales?
Arms sales to Colombia is a matter of concern because abuses involving the Colombian military, police and intelligence agencies appear widespread in the country during the last decade. The legal and judicial systems there today face many difficulties holding those responsible to account, a factor which contributes to the lawlessness felt in Colombia today. More than five decades of conflict has led to the militarization of large proportions of Colombian society. Moreover, a widespread access to weapons in the country has permitted gross abuses to take place. Amnesty International has called for a complete cut-off of military aid to Colombia due to the ‘dire human rights situation’.

By the UK government permitting the equipping of the Colombian government with cryptography systems, by far the most frequent licence granted, concerns are raised about the state spying on both its citizens and government officials, a concern raised by a national news magazine in 2014.

FCO reports in 2017 outline the fact that the key human rights concerns in Colombia include the inadequate protection of human rights defenders; gender-based violence; the human rights consequences of illegal economies such as drugs and illegal mining; and modern slavery. Among others, the FCO points to a lack of state presence as of concern. The FCO especially decries the increased threat faced by human rights defenders, noting the impunity rate for such crimes stands at 87%.

Despite such concerns, British soldiers have trained Colombian armed forces, according to the Ministry of Defence. Moreover, in June 2014, Hugo Swire MP, a foreign office minister, reportedly had a week-long trip to Latin America, which included a stop in Colombia to act as an official weapons salesman for arms firm BAE Systems.

What evidence is there of human rights abuses that the Colombian government have committed since 2010?

Events in 2010-2011
The Office of the High Commissioner for Human Rights (OHCHR) report for Colombia described how people arrested by security forces were beaten, electrocuted and suffocated while under detention by police forces. The annex of the report details five different occasions where torture was used by government officials. The OHCHR reports for 2010 and 2011 both contain a section of illustrative examples of human rights abuses such as summary execution, torture and displacement.

The 2011 UK government Foreign and Commonwealth Office (FCO) report on human rights and democracy raised concerns over violence against community representatives in the run-up to the 2010 regional elections, during which 41 election candidates were killed. Moreover, the UN Special Rapporteur for extrajudicial, summary or arbitrary executions Philip Alston looked at the occurrence of called “false positives” – a widespread practice used by national armed forces during the conflict, referring to the intentional killing of civilians regularly presented as guerrillas killed in combat to inflate the body count in the government’s war against FARC. This was done by changing the clothing of victims into military fatigues and then placing of and/or firing of weapons in the hands of those killed.

Events in 2012
Amnesty International’s annual country report described that Colombian security forces “continued to be responsible for serious human rights abuses and violations of international humanitarian law.”
Extrajudicial killings are still being reported and, according to Justice for Colombia, four people were shot dead “after government forces opened fire on unarmed protesters” in North-eastern Colombia.

Events in 2013
The human rights situation in Colombia remained of significant concern in 2013. The Colombian regime is being criticised for not taking sufficient steps to bring perpetrators of human rights violators to justice. The victims of such crimes are among others often human rights defenders, journalists and indigenous and Afro-Colombian leaders. On the contrary, the administration reportedly made several efforts to undermine accountability for violations of human rights, and impunity continued to reign. Moreover, despite being convicted in national courts, the regime refused that the military had participated in atrocities.

Events in 2014
Lack of accountability for human rights violations persist to be the norm in 2014, and the Santos administration continued to make efforts to hinder justice to the victims, especially in cases of the unlawful ‘false-positive’ killings. If such cases were to be investigated, they would be transferred to a military (and much less independent) justice system, that would do a minimum to investigate the allegations. Despite the number of ‘positive-false’ killings reportedly had decreased significantly, credible reports pointed to new cases in 2013 and 2014.

Events in 2015
No major improvements in Colombia’s human rights record are reported this year. Human Rights Watch published a report with detailed how 11 brigades participated in ‘false positive’ killings, naming four senior military officials who have occupied or currently occupy the highest rank in the Colombian military. And it stated that, after the government replaced a top army commander, who allegedly was responsible for almost 50 extrajudicial killings, the commander still continued to command the armed forces, despite the credible allegations against him.

Events in 2016
The government and FARC reached a historic peace agreement, which was an important step in order to end the year-long series of systematic human rights violations, committed by both sides. There were still reports of how the judicial system failed to hold high-ranking military officers to account for their culpability in the ‘false-positive’ killings. Besides one retired general, who was charged for conducting these unlawful killings, no other sufficient efforts had been made to convict generals for similar charges.

Events in 2017
In 2017, there were allegations of deliberate killings by state forces and allegations of excessive use of force by the Mobile Anti-Riot Squad (ESMAD in Spanish) during protests in Chocó, Valle del Cauca, Cauca and Catatumbo. The Association of Community Councils Mira, Nulpe and Mataje (Asominuma) reported that, on  October 5, security forces killed nine farmers as they indiscriminately fired against a peaceful demonstration in Tumaco (Nariño). Also, citizens of Buenaventura on the Pacific coast reported that the security forces repressed peaceful demonstrations which were part of the “civic strike”, reporting that tear gas was used against non-violent demonstrators. Health problems, as a result of exposure to tear gas during the ‘civic strike’ demonstrations, were reported by 313 people, and 16 people sustained gunshot injuries or trauma from blunt objects.

Despite this catalogue of harm, the UK still deems it acceptable to sell weapons and arms to the Government of Colombia.  Human rights abuses continue.