Egypt: Country overview
The Arab Republic of Egypt is located in Northern Africa, bordering Libya, Sudan and Israel. Egypt has a fast-growing population with an estimated population approaching 100 million. Egypt has a semi-presidential system of government, but after former President Hosni Mubarak was ousted in 2011, the parliament was dissolved, and the constitution suspended. Egypt has since been subject to political instability and the population has been exposed to extreme violations of fundamental human rights carried out by the authorities. Abdul Fattah al-Sisi has been the country’s president since he took power in a military coup in 2014.  As of late 2018, Egypt is still yet to sign and ratify the Arms Trade Treaty.

How many licences for the sale of arms to Egypt has the UK issued between 2008 and 2017?
There has been a steady and incremental rise in the provision of approved licences over the years. Indeed, between 2008 and 2017, there was an 750% increase in licences given to Egypt, from 63 to 535. However, like other states 2017, has seen the highest levels of arms exports , at presents a considerable rise from previous years. This happened despite the fact that 2015 saw 16 civilians being killed by government forces at a gathering to mark the anniversary of the start of the Egyptian Revolution. (2015 saw 253 approved military arms export licences to Egypt from the UK.) The rise in approved licences follows General Sisi’s coup against the democratically-elected government Muslim Brotherhood government.

As the graph below depicts, a total of 1,822 military arms export licences were granted by the UK government to Egypt between 2008 and 2017. 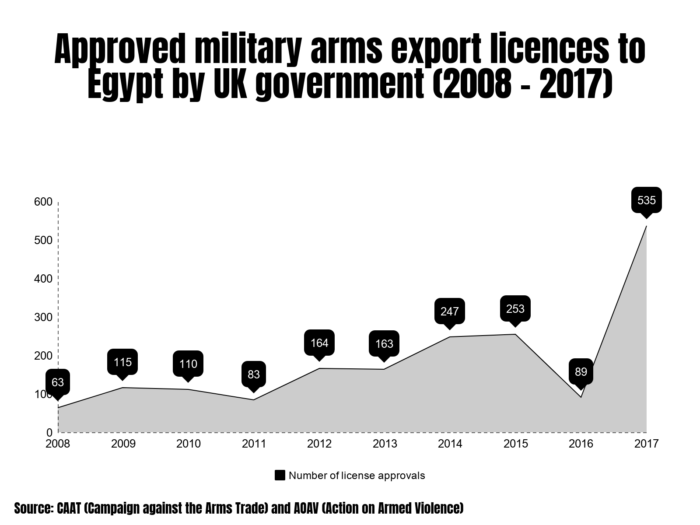 What is the total value of those exports in GBP?
After remaining less than £5m per year between 2008 and 2011, the following years saw a considerable increase in the total value of military arms exports to Egypt. In 2015, the UK approved £108.4m worth of military arms exports to Egypt – over 6,000% more than the value of arms approved for export in 2008.  In 2012, a year after at least 840 people were killed and over 6,000 injured during the Egyptian Revolution as then-President Hosni Mubarak clung to power, over £17m worth UK arms exports were approved for Egypt. 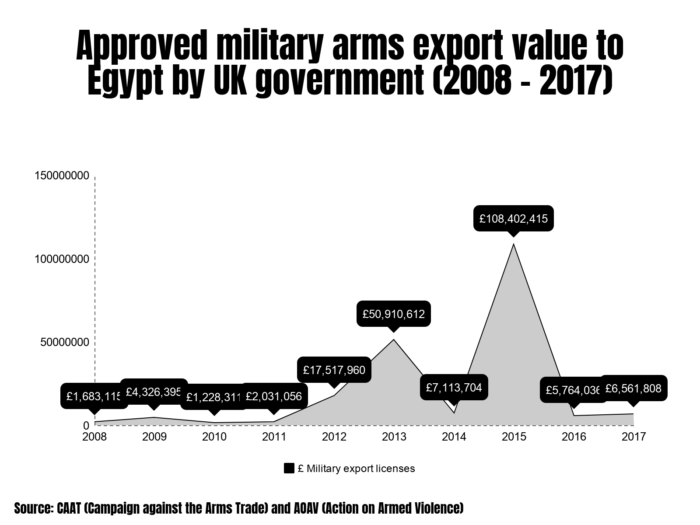 What are the top 10 types of arms export licences Britain is selling to Egypt?
Whilst the data given above is just for military exports (single-use), when you consider both military and dual-use exports (dual-licences are permits to control all the material, software and technology that can be used for civil purposes like humanitarian aid, but also for military goals) the top ten export items requiring licences are as below.
The most frequent type of licence provided by Britain to Egypt is that of cryptography equipment. Though this could be for defensive purposes for the state and its various agencies, this type of equipment can also be used to spy on Egypt’s citizenry. Internal repression has been widely criticised in Egypt and this kind of equipment will only give more muscle to the Egyptian state to monitor and track its citizenry.

Why should British citizens be concerned about arms sales?
British arms to Egypt are going to a regime involved in numerous human rights abuses. Since the eruption of the mass demonstrations in January 2011, Egypt has undergone several regime changes and it has been the subject of serious political turmoil. However, the human rights abuses perpetrated by the state apparatus remains a worrying constant. The police and security forces frequently employ brute force and violent weapons in dealing with civilians and opposition members and often enjoy impunity for their actions. Prosecutions concerning police brutality have not progressed far.

There are other concerns, too. Both government policy and law allow for the arbitrary detention of persons, for an indefinite period of time. The use of torture is widespread. Trial and sentences based on “confessions” extracted through torture and the use of military trials for civilians are common features of the Egyptian judicial system. The press faces impediments to free reporting, with journalists being detained and imprisoned. Recently, the government has begun to put in place measures that restrict the functioning of human rights NGOs and to target persons who affiliate with the LGBT community. In short, the human rights situation in Egypt is precarious with violations attributable to government policy – something that should concern deeply when considering the export of British arms to that country.

What has the British government said about these concerns?
Egypt is listed on the UK government’s ‘human rights priority country’ list, and the UK government admits that Egypt’s “human rights situation [has] remained poor and continued to deteriorate,” adding that, in 2015, reports of torture, police brutality, and forced disappearance increased. The FCO strategy to address and improve the human rights issues consists among others to raise the issues at a senior level, making public statements on issues of concern as well as bringing the issues up in multilateral fora.

The UK government has maintained a close diplomatic relationship with Egypt, with FCO officials regularly travelling to Cairo for coordination on a variety of topics, and President Abdel Fattah al-Sisi visited Downing Street in 2015. In 2017, Foreign Office minister Baroness Anelay said that the UK government often raise human rights concerns with the Egyptian government.

Egypt is a lucrative market for the British arms industry, and the country is a loyal ally in the region, so it is favourable to keep it within the US-UK geopolitical orbit. The official response is that Egypt is fighting an important battle against terrorism and the spread of ISIS in the Sahel.

What evidence is there of human rights abuses that the Egyptian government have committed since 2010?

Events in 2010
The security forces under the Mubarak’s government detained several individuals for political reasons and kept them in jail without trial. Besides, they reportedly used electric shocks and sleep deprivation to torture detainees, according to the U.S. State Department.

Events in 2011
The Arab Spring demonstrations reached Egypt on January 25 when mass protest erupted. President Mubarak stepped down and Egypt was governed by the Supreme Council of the Armed Forces (SCAF), a transitional authority of senior military officers that rules by decree. In that year, the most significant human rights issues were attacks on demonstrators (at least 800 persons were reportedly killed during the unrest), torture, arbitrary arrest, and the use of military courts in civilian cases. For instance, in late January 2011, authorities arrested and tried approximately 12,000 civilians in military courts without fundamental due process procedures.

Events in 2012
After public held elections, the Muslim Brotherhood’s Mohamed Morsi was elected president, while the killings of protesters and the poor prison conditions continued. Seven protesters women denounced that military officers sexually abused them while in custody. The government denied these allegations. There were also threats to freedom of speech, press, and association. The security forces assaulted, abused, and arrested journalists who were reporting clashes between protesters and the military under the SCAF power.

Events in 2013
Egypt emerged as a republic, governed at year’s end by interim President Adly Mansour, appointed by the armed forces in July after the removal of President Mohamed Morsi. During this year, the security forces’ excessive use of force against protestors and restriction on freedom of expression and press did not stop. For instance, 65 protesters were reported killed by security forces during a pro-Morsi demonstration in July. Police tortured suspects during both the Morsi and interim governments, reported Human rights organizations. Besides, a new law demanded permission to demonstrate, gave authority to prohibit or curtail planned demonstrations to the minister of the interior, and contained vague language listing prohibited activities.

Events in 2014
In this year, Egypt emerged as a republic governed by a president and a unicameral legislature, according to a new constitution approved by a referendum in middle January. President Al-Sisi entered office on June 8th. As in previous years, human rights organizations reported security forces killed demonstrators and tortured suspects at police stations, some of whom died as a result. It is estimated that 450 to 1.000 persons were arrested by security forces during protests on the third anniversary of the 2011 revolution. The detained alleged torture with beating and electric shocks. Moreover, at least 14 students died in protest-related violence at or near university campuses during the 2013-14 academic year. In most cases concerning official abuses, either the government did not comprehensively investigate human rights abuses or investigations resulted in acquittals.

On the contrary, a new law expanded the jurisdiction of military courts to try civilians, lack of fair trial continued to be a serious issue of concern, and capital punishment was reported on a wide scale and indiscriminately. In March 2014, in a single hearing, the Minya Criminal Court sentenced 529 supporters of former President Mohamed Morsi to be executed for their alleged role in violence following his ousting.

Events in 2015
In the midst of excessive preventative custody and pretrial detentions, the military courts tried hundreds of defendants without evidence for their individual cases. Additionally, the Foreign and Commonwealth Office published a figure of 676 cases of torture and 137 deaths in detention, meanwhile the El Nadim Center for the Rehabilitation of Victims of Violence reported37 deaths due to torture during the year.

The restrictions on civil liberties by the government were also against freedoms of expression and the press. The number of journalists jailed for their work rose to 23, according to the Committee to Protect Journalists. The government also limited the ability of NGOs to register, work and obtain funding, and a number of human rights defenders were banned from travelling.

Events in 2016
In February, authorities found the body of Italian postgraduate student Giulio Regeni, who was kidnapped in Cairo when he was researching about Egypt’s independent labour unions. Forensics officials stated that his body had signs of torture such as cigarette burns, broken bones, and electrocution injuries. In May of 2016, eight men were sentenced to death by a military court after ‘confessing’ under torture, along with another 18 receiving lengthy jail terms. The defendants had been whipped with a burning cloth into ‘confessing’ to firearms and other offences.

Due process problems persisted; these included the excessive use of preventative custody and pretrial detention, the use of military courts to try civilians, trials involving hundreds of defendants in which authorities did not present evidence on an individual basis, and arrests conducted without warrants or judicial orders. Civil liberties problems included societal and government restrictions on freedoms of expression and the media, as well as on the freedoms of assembly and association in statute and practice.

Events in 2017
Fundamental human rights violations were persistently being reported. Torture and ill-treatment continued to be a widespread practice among security forces. Human Rights Watch disclosed details about the procedures of torture sessions. According to detainees, security officers used handheld electric stun guns to shock the suspects, who normally are blindfolded, stripped, and handcuffed. Policemen increased the duration of electric shocks if detainees do not provide satisfactory answers to their initial questions. Sometimes, interrogators would hang the suspected in unnatural and stress positions, such as the so-called ‘chicken position’, during minutes or hours.

Furthermore, enforced disappearances against hundreds of people were reported, and there were claims of dozens of people having been extrajudicially executed with impunity. The arbitrary arrests and detentions against government critics, peaceful protesters, journalists and human rights defenders were likewise continuously reported, with dozens sentenced to death.

The crackdown on NGOs escalated in 2017 as investigative judges set up a criminal investigation into the activities and funding of NGOs, questioning staff and consequently banning 12 defenders from travelling and freezing the assets of seven defenders and six groups. The authorities ordered the closure of one human rights organization.

Despite this catalogue of harm, the UK still deems it acceptable to sell weapons and arms to the Government of Egypt.  Human rights abuses continue.