Honduras: Country overview
The Republic of Honduras is a country in Central America, bordering Guatemala, El Salvador and Nicaragua, and is reportedly the second poorest and most unequal country in the Americas. Honduras is a presidential representative democratic republic, but since a 2009 coup is a country plagued by a mix of violence, impunity and corruption. The National Party has been in power since the coup, despite allegations of state-sponsored killings, electoral fraud and links to organised crime. Juan Orlando Hernández has been the country’s president since 2014.

Honduras signed the Arms Trade Treaty in September 2013, but as of 2018, has yet to ratify. 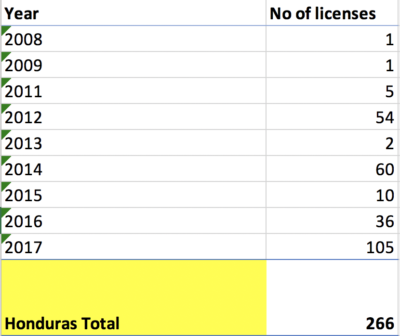 What is the total value of those exports in GBP?
From 2008 to 2017, the value of the UK exports to Honduras was £431,307. However, most of it was spent on dual-use equipment since only £1,520 was exclusively for weapons and military resources.

What are the top 10 types of weaponry Britain is selling to Honduras?
The most frequent type of equipment sold by the UK to Honduras is military aircraft ground equipment.  This is to be expected for a government using its military to disrupt drug networks in the rural areas of the country.

Why should British citizens be concerned about arms sales?
Honduras is witness to a wide number of state-perpetrated human rights concerns. Overall, violent crimes are especially widespread, and despite a slight decrease, Honduras has one of highest murder rates in the world, where journalists, environmental activists, and LGBT individuals are among those most vulnerable to violence. More specifically, those who challenge the government or its interests through their work are reportedly routinely targeted. The police and judicial bodies have remained ineffective in providing public security, in part due to widespread corruption.

Corruption remains prevalent within the state and security forces are often reportedly implicated in incidents of homicides, torture, disappearances, and threats. Since 2009, the human rights situation is said to have deteriorated, and many human rights crimes remain unsolved or are said to have been committed by ‘unknown’ individuals. Between 90 and 95% of murders remain unprosecuted.

Despite this, the UK has continued (and even increased) its arms sales to Honduras. In 2018, the UK government approved an export licence of spy equipment to Honduras, despite concerns that such equipment has been used by the government to spy on its population – in particular with regard to a crackdown on opposition members. The sales potentially amount to a breach of the 2008 British Export Control Act that prohibits the sale of arms to countries where there is a clear risk that they will be used to repress their own people. Therefore, the licences are highly recommended to be revoked and followed by an investigation on whether UK equipment has facilitated repression of Hondurans.

What has the British government said about these concerns?
The UK government has said nothing about the ongoing human rights abuses by the government in Honduras. In response to a parliamentary question, Sir Alan Duncan gave, in 2016, a boilerplate reply: “The British Government continues to call on the Honduran Government to uphold all human rights, including the right to peaceful protest. I raised the importance of human rights with the President of Honduras’ Congress during his visit to London in September. (…) Whilst we recognise that some progress has been made by the Honduran Government, recent high profile cases, including that of Berta Cáceres, have shown that more still needs to be done.”

Also, MP Hugo Swire said in 2016: “I am deeply concerned by the murder on 3 March of Honduran human rights and environmental activist Berta Cáceres. As one of the most prominent activists in Honduras, Berta Cáceres worked tirelessly over many years to promote the rights of indigenous communities. Minister of State for Foreign and Commonwealth Affairs (…) called for the perpetrators to be brought to justice. These points and a wider call for a commitment to human rights and those who defend them were also set out in an EU statement which the UK has strongly supported. The Honduran authorities are now taking forward an investigation into what happened. We welcome their swift action to initiate an investigation. We continue to call on the Honduran Government to take steps to improve the security situation, and we discuss our human rights concerns with them regularly”.

Despite above statements that reflect an awareness and concern for the security situation in Honduras, the arms export has continued unaffected.

What evidence is there of human rights abuses that the Honduran government have committed since 2010?

Events in 2010
Political upheavals in Honduras in 2009, culminating with the military removing the democratically elected President Manuel Zelaya, led to widespread human rights abuses. These were most notable perpetrated by security forces during the demonstrations that followed the coup, where the de facto government tried to consolidate control by using repressive measures. When Porfirio Lobo became president in 2010, a truth commission was created to look into the events surrounding the coup. The commission, however, failed to hold any perpetrators to account.

Events in 2011
Honduras still failed to hold those responsible for widespread human rights violations under the de facto government. Impunity, therefore, remained a serious concern. Human Rights Watch also reported that the violence and threats against journalists, human rights defenders, political activists, and LGBT people persisted, where impunity still protected those responsible. Human rights organisations received reports of police abuse, and by the end of the year, six specific cases were under investigation by the special prosecutor for human rights. Moreover, it was reported that prison conditions did not meet international standards, as they amounting life-threatening due to (among others) overcrowding, insufficient access to food and water, violence, abuses by prison officials.

Events in 2012
No improvements in Honduras’ human rights record was noted in this period. Prison conditions persisted – reaching below international standards (400 inmates reportedly died violent deaths in 2012), but, despite this, the president did not sign the legislation needed to reform the prison system, even though it had been passed by Congress. Moreover, the truth commission investigating the human rights violations that took place in 2009, where yet to make any criminal charges against those responsible.

The newly established independent body, the Directorate for Investigation and Evaluation of the Police Career, established to combat police corruption and human rights abuses, had – by October of 2012 – only referred two police officers, despite the vast amount of allegations relating to the use of force by security officials. Finally, evidence showed that violence and threats by unidentified perpetrators against journalists and political activists, remained a serious problems. Even so, perpetrators were rarely brought to justice.

Events in 2013
Impunity for human rights abusers remained a serious problem and perpetrators of killings and other violent acts rarely saw convictions. Those institutions responsible continued to fail securing security and justice. The murder rate of Hoduras in 2013 was reported to be the highest in the world, and journalists, peasant activists, and LGBTI activists continued to be subject to unpunished violent attacks. Impunity for abuses committed by security officials was also described as a ‘chronic problem’; the police reportedly killed 149 civilians from January 2011 to November 2012, including 18 individuals under age 19. Reports also said that security forces were involved in arbitrary or unlawful killings.

By the end of the year, there were reportedly 687 administrative and criminal complaints against members of police forces relating to allegations of abuse of authority, police brutality, robbery, and homicide. However, only a few of the allegations led to resolved investigations.

Finally, Human Rights Watch reported that the Congress passed legislation that empowered it to remove justices and the attorney general undermined judicial and prosecutorial independence.

Events in 2014
Serious human rights violations in Honduras continued through 2014. The state continued to be unable to provide security, and the murder rate remained the world’s highest. Political activists and human right defenders still faced violent attacks, leaving the abusers unpunished. Amnesty International showed particular concern for this impunity and the administration’s failures to provide justice.

There was, likewise, raised concern about the police’s extensive use for force. Because of high crime rates, some police tasks were done by the military and other security forces. This caused concern as these groups did not receive the adequate training in order to respect and protect human rights; the period saw numerous reports of human rights violations committed by the security forces.

2014 also witnessed a proliferation of firearms and of private security companies. During a visit in 2013, the UN Working Group on the use of mercenaries reported that “private security companies were committing abuses with the permission or participation of the police and the military, and with impunity”. This is another reason why arms sale to Honduras is a concerning matter, as the spread and availability of the weapons provided means that such weapons are not guaranteed to stay within official use.

Events in 2015
The same reports about violence against minorities, political activists and human right defenders continue as well as reports about the constant lack of effective, non-corrupt judicial bodies, leading to impunity. However, the government did enact a law to protect human rights defenders, journalists, and legal practitioners and a “protection system” headed by the Secretariat of Justice, Human Rights, Governance, and Decentralization was set up.

Moreover, inhumane prison conditions, such as overcrowding, inadequate nutrition, and poor sanitation were described as “systemic in Honduran prisons”. Prisons designed to hold up to 8,600 inmates, were reportedly holding more than 15,000 in February 2015. Corruption among prison officials was also widespread.

Events in 2016
Numerous reports of violence and insecurity continued in 2016. The most vulnerable groups for threats and violent attacks continued to be women, migrants, internally displaced people, human rights defenders – especially lesbian, gay, bisexual, transgender and intersex (LGBTI) people as well as environmental and land activists. As Amnesty noted, “a weak criminal justice system contributed to a climate of impunity”. In 2016, the human rights ombudsman, CONADEH, registered 16 violent attacks against lawyers, including 13 killings. Moreover, The Inter-American Commission on Human Rights (IACHR) described Honduras, in August 2016, as one of the “most hostile and dangerous countries for human rights defenders” in the Americas. It was also in 2016, that the environmental activist Berta Cáceres was shot dead in her home.

In part because the government continued to outsource public security tasks to military units lacking adequate human rights training, an excessive use of force was again reported.

Events in 2017
The violent climate in Honduras continued through 2017, and impunity for crime and human rights abuses became the norm, undermining public trust to governmental institutions. In February, Congress approved a new penal code, making it a criminal offence for individuals or news platforms to engage in the “apology, glorification, [or] justification” of terrorism. However, the new legislation defines terrorism in vague terms, referring to any acts “causing fear, putting in grave risk, or systematically and indiscriminately affecting the fundamental rights of the population or a part of it, the internal security of the State or the economic stability of the country”. These broad and unclear provisions could be used to target peaceful protests and association meetings. The UN High Commissioner for Human Rights (OHCHR) expressed concern for the law’s vague wording, fearing it can be used to arbitrarily restrict freedom of expression and of the press.

Despite this catalogue of harm, the UK still deems it acceptable to sell weapons and arms to the Government of Honduras.  Human rights abuses continue. For more from this investigation please go here.