Israel and the Occupied Palestinian Territories: Country overview
The State of Israel and the Occupied Palestinian Territories are located in the Middle East, sharing borders with Syria, Jordan, Lebanon and Egypt. Israel claims Jerusalem as its capital, while Tel Aviv functions as its economic and technological centre. Benjamin Netanyahu, from the right-wing Likud party, has been Israel’s prime minister since 2009. Since the establishment of the State of Israel in 1949, Israel has found itself in numerous wars against and subject to attack by its neighbours and in particular the Palestinians, who accuse Israel of committing deeds that amount to war crimes against them.

Israel signed the Arms Trade Treaty in 2014, but as of 2018, ratification remains.

How many licences for the sale of arms to Israel has the UK issued between 2008 and 2017?
The number of exports licences granted to Israel has during the past decade been characterised by a constant – and significant – number of approved arms licences, never reaching below 100 in any of the reported years. The number of approved licences, however, took a spike in 2013 with 310 approved licences, the double of the previous years. And again, since 2016, the number has significantly increased, reaching 395 in 2017.
In total, 2,279 export licences were provided to Israel from 2008 to 2017. 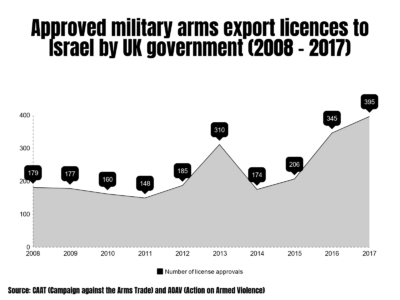 What is the total value of those exports in GBP?
Israel is a significant market for British arms companies and has been through all recent political administrations. However, 2017 took a huge spike where the total values of arms exports skyrocketed to £220m. in that year alone. This is in stark contrast to the nine previous years where the annual average was £21,4m. It is notable that the significant rise took place in the immediate aftermath of Brexit.
In total, from 2008 to 2017, £413,2m. worth of licences was exported from the UK to Israel. 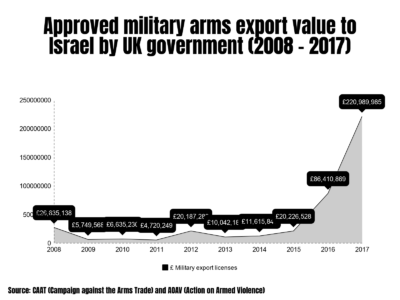 What are the top 10 types of arms export licences Britain is selling to Israel?
Whilst the data given above is just for military exports (single-use), when you consider both military and dual-use exports (dual-licences are permits to control all the material, software and technology that can be used for civil purposes like humanitarian aid, but also for military goals) the top ten export items requiring licences are as below.

By far the most common licence awarded for arms exports to Israel is equipment employing cryptography, which is a general category but includes access to advanced surveillance and offensive cyber weapons. With a captive largely Palestinian population of two million people in Gaza and more in the West Bank, such technology could help the Israeli government more effectively monitor the Palestinians. Israel also has an advanced high-tech sector itself but has received 143 licences in the period for “electronic warfare equipment”. Other frequent categories include military radar components and imaging cameras, items that can be used for spying and surveillance purposes.

Why should British citizens be concerned about arms sales?
The Israeli government is accused of routinely and systematically violating the Palestinians human rights. The government imposes restrictions on several of their rights, most particular the right to movement. Israeli forces regularly arrest non-violent protesters, and almost all of the cases appearing before the military courts end with convictions, as the conviction rates approach 100%. Abuses of those in Israeli custody is likewise widely reported.

The construction of Israeli settlements on Palestinian territory, its year-long near-total closure of the Gaza Strip and its restrictions that limits the supply of vital goods, spanning from medical care to water entering the civilian population in Gaza, have all been said to constitute breaches of international human rights. The blockade on Gaza has, for instance, helped caused a stagnant economy, imposed severe restrictions on, and abuses of the rights of Palestinians, fuelled environmental and physical destruction, as well as created widespread psychological trauma.

During the 2014 Gaza war against Hamas, Israel was accused by a range of international actors, including the UN, of committing serious breaches of international law, amounting to war crimes. Israel denies the allegations.

It is a matter of concern that the UK continues its substantial arms sales to a country facing such serious allegations. The advanced cyber equipment is especially concerning due to Israel’s record of spying and policing political activists and human rights defenders’ doings.

However, Downing Street also states that Israel has a “legitimate right to self-defence”, and if Britain suspended its exports without the support of the rest of Europe, it would have little effect and consequently damage the UK’s influence over Israel. As a British government official said in 2014, “our view is that the main focus should be on the bigger picture of trying to get Israelis and Hamas to end the violence.”

Nevertheless, after a violent incident in early 2018, that left 58 Palestinians dead, Theresa May called for greater restraint against Israel. Generally, given the level of accusations against Israel, several UK MPs have called for a review as to whether UK arms sales to Israel have, or could be, used in violation of international law. A review by the government found that the UK had issued 12 licences for arms that allegedly had been used in the 2014 Gaza war. Back in 2010, the then foreign secretary, David Miliband, said British-supplied components “almost certainly” had been used in Israeli attacks on Gaza. During a review of UK arms sales to Israel in the aftermath of the 2014 Gaza war, UK said that no new licences of military equipment have been issued to the Israeli Defence Forces during this period.

Finally, when asked in 2018 whether the UK government would consider rescinding all export licences allowing the export of arms to Israel, MP Graham Stuart answered that “the Government takes its defence export responsibilities extremely seriously and operates one of the most robust export control regimes in the world. Export licence applications for all countries, including Israel, are assessed carefully against the Consolidated EU and National Arms Export Licensing Criteria. We will not grant a licence if to do so would be inconsistent with these Consolidated Criteria. We are keeping the situation in Israel and Gaza under close review and consider the latest circumstances when assessing licence applications.”

What evidence is there of human rights abuses that the Israeli government have committed since 2010?
Israel operates a two-tier system for the two populations of the large areas under its exclusive control. The following evidence aims at showing instances in which Israel proved to have violated several human rights in the Occupied Palestinian Territories and Palestine. The breakdowns focus on the years of 2010, 2011, 2014, 2016 and 2017 and provide evidence of widespread abuses by the military forces as well as the state itself.

In May, Israeli forces intercepted the humanitarian aid ship Mavi Marmara when it attempted to breach the Israeli and Egyptian blockade of Gaza. The interception killed nine Turkish activists and injured many others. During certain phases of the operation, Israeli soldiers reportedly continued shooting at passengers who had already been wounded. Results of post-mortem examinations demonstrated that a total of 30 bullets were found in the bodies of the dead activists (one was shot four times in the head). Forensic evidence showed that majority of the killed were shot multiple times or at close range while already lying on the ground.

The attack was against international law, as there was no legal basis for the Israeli forces to conduct an assault in international waters. All phases of the operation saw lethal force being employed by the Israeli military in a widespread and arbitrary manner. Nine passengers were killed and 24 more were seriously injured, although they were proved not to pose any immediate threat to the soldiers, according to the UN Human Rights Council.

Furthermore, Israel’s detention of the passengers on the Mavi Marmara was reportedly done in a cruel and inhuman way. Forced to kneel in harsh conditions for many hours, passengers were physically and psychologically mistreated and abused. For instance, access to basic human needs such as the use of toilet facilities and the provision of food was denied.

The Israeli parliament, the Knesset, passed an anti-boycott law. Amnesty International decried the law as an attack on Palestinians’ freedom of expression, since calling for a boycott of people or institutions against the state of Israel or its settlements in the West Bank and East Jerusalem area becomes a civil offence and financial penalties and legal action are imposed. The definition of boycott can broadly be applied to any non-violent means of dissent or criticism towards any individual or institutions participating in human rights violations.

After increasing tensions between Israel and Hamas, the Israel Defence Forces introduced Operation Protective Edge in the Gaza Strip in July 2014. The 2014 Israel-Gaza Conflict caused a scale of devastation and high incidence of loss of human life and injury both for Palestinian and Israeli victims. As a result, Israel military forces and Palestinian armed groups were pointed out by the UN Human Rights Council of violating several core principles in international humanitarian law and international human rights law. A total of 2.251 Palestinians was killed (1.462 civilians, of whom 299 women and 551 children) while 73 Israelis were killed (6 civilians and 67 soldiers).

The war had enormous consequences of the civilian infrastructure in Gaza as 18.000 houses were destroyed, the electricity, water and sanitation infrastructure were paralysed, and 73 medical facilities and numerous ambulances were damaged. Evidence shows several cases in which civilians were systematically targeted, not representing any direct threat and at times holding white flags, which is against the principle of distinction.

Numerous reports showed how Israeli authorities systematically carried out arbitrary arrests and detentions. By the end of April, at least 694 Palestinians were held by the Israeli military under administrative detention, based on ‘secret evidence’ (meaning that information is withheld from lawyers or fellow detainees) without indictment or trial. Although administrative detention is allowed to be used in emergency circumstances according to international law, it is a procedure used extensively and systematically by Israel as a punitive measure.

By 2017, Israel had established 237settlements, housing a total of 580,000 settlers. Israeli civil law is applied to settlers, who are therefore granted rights and benefits, including security, administrative services, housing, education and medical care, which are not extended to Palestinians.

Despite this catalogue of harm, the UK still deems it acceptable to sell weapons and arms to the Government of Israel.  Human rights abuses continue. For more from this investigation please go here.