Myanmar: Country overview
The Republic of the Union of Myanmar, also known as Burma, is located in Southeast Asia, bordering India, Bangladesh, Thailand, Laos and China. The country’s estimated population is around 51 million. Myanmar was, from 1962 to 2011, ruled by an oppressive military junta, but during the past decade, the country has undergone a transition process from military to civil rule. In 2015, the country had in its most open elections in 25 years, leading to the victory of the opposition leader Aung San Suu Kyi.

Myanmar was, and still is, subject to international condemnation for its military operation in August 2017 against the Rohingya Muslim minority, forcing more than half of them to flee.

Myanmar has as of 2018 neither ratified nor signed the Arms Trade Treaty.

How many licences for the sale of arms to Myanmar has the UK issued between 2008 and 2017?
The number of exports licences granted for Myanmar has besides from two years, been exactly zero. The only deviations were in 2012, under the Cameron-Clegg government, were two licences were approved and then again in 2017 with three approved licences. 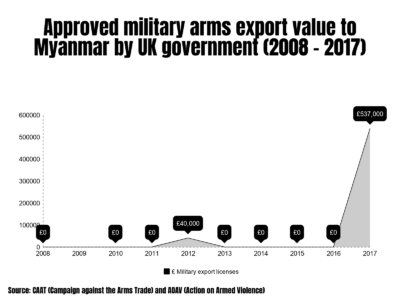 What are the top 10 types of weaponry Britain is selling to Myanmar?
Whilst the data given above is just for military exports (single-use), when you consider both military and dual-use exports (dual-licences are permits to control all the material, software and technology that can be used for civil purposes like humanitarian aid, but also for military goals) the top ten export items requiring licences are as below.
The largest type of weaponry exported is information security software, which is a broad category that can include surveillance and high-tech spying equipment. That should be of extreme worry in a regime such as Myanmar’s which still has a military and intelligence deep state that is repressive of dissent and independent political action.

Why should British citizens be concerned about arms sales?
Myanmar’s poor human rights record shows serious violations of the rights of freedom of expression, association, assembly and media. Despite efforts to meet international standards and to reform the country into a democratic rule, Myanmar has demonstrated very little progress, and political activists and ethnic minorities continue to be the most exposed groups to face the state-sponsored violations and abuses.

2017 was the country’s first full year under a democratically elected government, headed by Aung San Suu Kyi. However, due to the 2008 constitution, most of the power remains in the hands of the military who is given autonomy from civilian oversight. The military enjoys a de facto veto over any constitutional changes as it is guaranteed minimum 25 seats in parliament. So, despite the appearance of civilian, democratic rule, the military remains the country’s primary power-holder.

What has the British government said about these concerns?
The UK has listed Myanmar on its list of ‘human rights priority countries’ and has generally been outspoken in addressing the severe shortcomings in the country’s human rights records, particularly in regard to lack of political and civil rights. Theresa May has shown strong commitments to cooperate with Aung San Suu Kyi and during the latter’s visit to London in 2016 the two’s close relationship was again confirmed. However, May did raise concerns about human rights abuses in the Myanmar military. But generally, the British government has been very optimistic about the changes being brought in by the new democratic-elected government, and the FCO stated in 2017 that:

“Burma continues to make significant progress on human rights following the historic elections of 2015 and the transition to a new, more civilian, democratic and accountable government. While the government has shown early willingness to address areas of concern, it has inherited enormous challenges. In assessing Burma’s human rights performance, it is also important to acknowledge that those responsible for rights violations are not necessarily under the direct control of the civilian authorities.”

Despite from temporarily suspending its defence cooperation with the Myanmar army and sending FCO staff on a fact-finding mission, the UK has shown little efforts to address and impact the Rohingya situation in Myanmar. Strong and consistent UK condemnation of the ethnic cleansing against the Rohingya has remained absent. Despite strengthened EU sanctions against the regime since 2017, the UK has shown limited willingness to halt or decrease its already approved licences to Myanmar. This is a serious cause of concern that the UK continues arms sales to a regime that systematically violates human rights, especially in the light the international condemnation that Myanmar recently has been subject to. Moreover, it indicates a tendency of prioritising profit over human rights considerations.

What evidence is there of human rights abuses that the Myanmar government have committed since 2010?

Events in 2010
Myanmar had its first multiparty elections in 20 years – however, the State Peace and Development Council (SPDC) issued repressive election laws that ensured that the polls would be neither free nor fair. The SPDC continued to deny the population from basic freedoms and access to political participation was more or less impossible. Moreover, the rights of freedom of expression, association, assembly, and media remained severely restricted. For instance, under a new Constitution, perpetrators of human rights violations were granted impunity, and restrictions on human rights were tightened.

Finally, the military was reportedly responsible for abuses against civilians in the ongoing civil conflict. Abuses that counted widespread forced labour, extrajudicial killings and forced expulsion of the population.

Events in 2011
The human rights situation remained unchanged in 2011, and basic freedoms continued to be curtailed. Small improvements were reported, such as the relaxation of some media and the release of 316 political prisoners. But the torture and ill-treatment of detainees was still an urgent issue. Fifteen political prisoners, currently on hunger strike in Insein prison in Myanmar, were reportedly being tortured or otherwise ill-treated. According to sources in Myanmar, they were denied drinking water, and eight of the prisoners have been held in cells designed to hold dogs. The military was responsible for serious abuses against civilians as the ethnic conflict escalated in 2011, including extrajudicial killings, the use of “human shields,” and indiscriminate attacks.

Events in 2012
The military reportedly continued to be involved in extrajudicial killings, attacks on civilians, forced labour, torture, pillage, and use of antipersonnel landmines. Also, sexual violence against women remained a major problem, but perpetrators were rarely brought to justice. Despite the military’s widespread and well-documented abuses against the civilians, there was almost a categorical denial by officials that the army was responsible for systematic violations against civilians. State-sponsored sectarian violence was reported on a big scale. Amnesty International reported that the ethnic and Muslim minority of the Rohingyas, primarily based in the northern Rakhine State were denied many basic human rights, are still not recognized as citizens and are subject to systemic discrimination in marriage, travel and employment. All Rohingya in Myanmar are denied citizenship on the basis of the 1982 Citizenship Law, leaving many of them, including children, stateless. The security forces were reportedly accused of killings, rape and mass arrests of Rohingya Muslims.

Events in 2013
Notable human rights improvements, particularly in the areas of freedoms of assembly and association, for instance, were noted in this period. Many sanctions were lifted, including all relevant provisions of the EU Common Position except its arms embargo. However, serious issues still remained throughout the country. Peaceful political activists continued to be arrested and the military was shown to be continuously committing abuses against the civilian population. Sectarian violence against especially Muslim communities increased in 2013, with the official authorities either failing to intervene or even implicated in the violence itself.

The most troubling case of this abuse was in the Rakhine State, where the government made very few efforts to address the root causes of the violence or to fulfil its 2012 pledge, that aimed at providing a path for citizenship for the Rohingya population.

Events in 2014
The promised reform process saw a very slow progress in 2014, and laws that significantly limited human rights continued to be passed by the government. Amnesty International reported that at least 60 individuals have been charged under Article 18 of the Peaceful Assembly Law – however, the actual number is estimated to be higher. The charged include political activists, environmental activists, human rights defenders and other peaceful protesters, and have all been charged merely for their participation in peaceful assemblies and demonstrations.

The planned staging of free and fair elections in 2015 became doubtful, as the scheduled pre-elections were cancelled and the necessary commitments to amend the 2008 constitution remained.

The systematic repression of the Rohingya Muslims continued in 2014, who still faced restrictions on movement, employment, and religious freedom. In January, a major incident in a Rohingya village called Du Chee Yar Tan in Maungdaw township reportedly led to the killing of between 40-60 Rohingya members by security forces and Arakanese residents. Government investigations, reportedly below international standards, dismissed the incident as exaggerated. Meanwhile, journalists and independent human rights monitors were not given access to the area to investigate.

Events in 2015
The transition process from military to civilian rule was still wound down during 2015. Some improvements took place, but vital steps to improve the human rights situation failed to happen. The first relatively open national elections in 25 years, leading to the victory of the opposition National League for Democracy (NLD), rebooted the reform process in some spectres, but major changes were yet to be seen.

Finally, the year saw an increase in the number of political prisoners; around 112 people were arrested for alleged violations of the Peaceful Assembly Law and other political offences by the end of 2015. This was a notable rise in cases since the large prisoner amnesties of 2012.

Events in 2016
State-sponsored violence against the Rohingya minority continued and even escalated. Following outbreaks of violence in the Rakhine State on October 9, that killed nine police officers, the government launched “clearance operations” in order to track the alleged attackers. This included a complete lock-down of the area, denying access to humanitarian aid groups, independent media, and rights monitors. Despite lack of access, the military operations reportedly resulted in serious abuses by the military against the Rohingya citizens, including summary killings, rape and other sexual violence, torture and ill-treatment, arbitrary arrests, and arson.

Amnesty International’s reports suggested that the military deliberately targeted Rohingya villagers in the aftermath of the 9 October attacks, hence violating the international standards of necessity and proportionality by not distinguishing between combatants and civilians. The operations, therefore, amount to collective punishment of the Rohingya population in Rakhine State, a clear violation of international law, and Amnesty International assesses that the military’s actions may amount to crimes against humanity.

Events in 2017
Myanmar’s critical human rights records reached an unprecedented level when the military launched a large-scale ethnic cleansing campaign against the Rohingya minority in the Rakhine State in August 2017. The Rohingya faced mass killings, sexual violence, arson and other abuses that amount to crimes against humanity by the security forces, and more than 650,0000 were forced to flee to neighbouring Bangladesh. The international community has condemned Myanmar’s actions on a large scale, with the UN famously describing it as  “a textbook example of ethnic cleansing”.

On a more positive note, it should be mentioned that the NLD-government did make some efforts to meet international human rights standards. Among others, it ratified the International Covenant on Economic, Social and Cultural Rights and implemented minor reforms to laws regulating speech and assembly. Nevertheless, the government, led by Aung San Suu Kyi, continued to use repressive laws to prosecute state-critical journalists and activists. Despite the fact that Myanmar had been relaunched as a civilian democracy, the military continued to be the primary power-holder.

Despite this catalogue of harm, the UK still deems it acceptable to sell weapons and arms to the Government of Myanmar.  Human rights abuses continue.