Qatar: Country overview
Qatar is a small oil-state located in the Gulf, bordering Saudi Arabia and has an estimated population of 2.7 million; the overwhelming majority of these, however, are migrants. Due to oil revenues, it is one of the world’s richest countries per capita. Qatar is a constitutional monarchy with Emir Sheikh Tamim bin Hamad al-Thani as the country’s country leader, who in 2013 took over from his father. Qatar has, as of 2018, neither ratified nor signed the Arms Trade Treaty.

How many licenses for the sale of arms to Qatar has the UK issued between 2008 and 2017?
The number of licenses granted by the UK government for Qatar stayed relatively constant from 2008 to 2013. But in 2014 it more than doubled in one year to 382. Since then it has surged, hitting 690 in 2017, as the country became increasingly isolated from its neighbours in the Arabian Peninsula and war was a very real threat. That might explain why the military equipment was the most sold: 2,327 items out of 3,257. 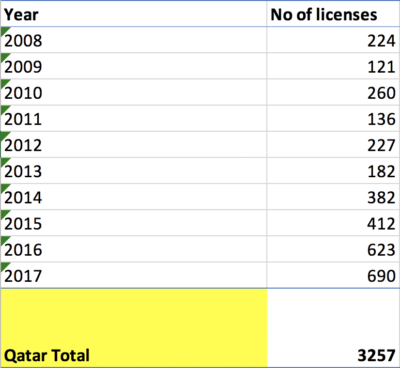 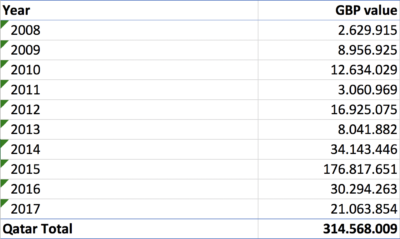 What are the top 10 types of weaponry Britain is selling to Qatar?
The most recurrent items on the export list are surveillance items, specially designed to cyber surveillance technology, that can be used to spy on its citizens. Increased levels of government surveillance in Qatar has since 2011 had a negative impact on the ability of human rights groups to organize and advocate.

Why should British citizens be concerned about arms sales?
Qatar is an authoritarian state, where major human rights concerns centre around media freedom, migrant workers’ rights and the treatment of detainees, who reportedly are subject to beatings and cruel treatment.

Although Qatar is home to the foremost newsgroup in the Arab world, al Jazeera, between 2010 and 2017 the government arrested a number of journalists arbitrarily, passed legislation curbing freedom of the press and targeted media outlets. According to the watchdog group Freedom House, on a scale of zero to 100 (100 = worst), the country dropped in ranking from 66 in 2010 to 70 in 2017 in terms of press freedom. The group has designated the country as “Not Free” in terms of freedom of the press and general political freedom.

The Qatari regime’s cut-downs on freedom of expression has especially become evident in cases where journalists and human rights activist have tried to report about Qatar’s criticisable treatment of migrant workers under the so-called Kafala system. Qatari migrant workers suffer from abuse and working conditions there have been compared to modern slavery, though the reporting of these issues have often led to detentions and harassment for the workers and the reporters.

British arms export presents a serious concern for this reason: Qatar’s appalling human rights record.  And because of the imminent risk that UK-sold equipment can facilitate further repression and unlawful surveillance of Qatari citizens. Seemingly, the UK’ political, military and domestic economic interests yet again rate higher than their human rights concerns.

What has the British government said about these concerns?
The UK has made no public condemnation of the human rights situation in Qatar. In fact, in 2018, a British parliamentary delegation praised Qatar’s efforts in protecting and enhancing workers’ rights.

The latest move by the UK with regards to defence cooperation with Qatar took place in December 2017, where the UK signed a statement, saying it would supply Qatar with 24 Typhoon jets, a package of missile and laser-guided bombs at a total value of £6 billion. At that time, Williamson, British defence chief, welcomed the major order from Qatar, saying that the fighter jets will support “stability in the region and delivering security at home”.

What evidence is there of human rights abuses that the Qatar government have committed since 2010?

Events in 2010
Several fundamental rights were reported violated in this year. Some were fundamental – Qatari citizens lacked any right to change their government, as no political parties are allowed in Qatar. Moreover, there were restrictions on a series of civil rights, such as freedoms of speech, press (including the Internet), assembly, association, and religion. Also, prolonged detentions in crowded facilities, that often ended with deportation were reported, and there were especially worrying reports about the regime’s treatment of migrant workers, who enjoyed very limited rights. Nonetheless, despite such concerns, Qatar was selected to host the 2022 World Cup in 2010.

Events in 2011
Qatari authorities reportedly detained a number of international and national journalists and human rights defenders.  The accused were carrying out critical reporting about human rights violations in the country. Qatar law permits criminal penalties, including jail terms, for defamation, and under their media law, journalists may be arrested without a court order.

Beyond its borders, as anti-government protests evolved into civil war in Syria and Libya, Qatar began supporting rebel groups in both countries with weapons shipments. These weapons shipments were sent indiscriminately to aid rebel coalitions in order to gain influence over anti-government groups in the region. Qatar did not consider the end use of these weapons and whether the end they would be used in violation of human rights.

Events in 2012
The number of foreign migrant workers increased significantly in 2012 due to the mass construction project prior to the 2022 World Cup. Human rights groups reported on the widespread abuse of the foreign workforce, who are controlled by the so-called Kafala system.  This system gives individual employers complete control over workers.  They typically confiscate workers’ passports as part of the hiring process, which is a clear violation of the freedom of movement. In June, the Shura Council, Qatar’s legislative body, approved a media law attempting to silence public criticism of neighbouring Gulf States. The law called for violators to be fined up to hundreds of thousands of dollars.

Events in 2013
In May, a law was drafted to penalise cyber-crimes. No independent media groups were consulted in the drafting process and the full content of the law was not revealed to the public. The law “punishes anyone who infringes on the social principles or values or otherwise publishes news, photos, audio or visual recordings related to the sanctity of the private and familial life of persons,” widening the government’s power to curb media freedom. In this year, Qatar became a major importer of small arms and lights weapons, increasing spending on weapons procurement in this area from 2 million to 16 million USD between 2012 and 2013.

Events in 2014
In October, The Guardian reported that the UK government had identified Qatar as a target market for arms exports, despite concerns for Qatar’s human rights record.

Events in 2015
Despite government promises of greater protections for migrant workers in 2014, the Kafala system continued in 2015. Multiple foreign journalists were arrested in Qatar for reporting on migrant labour conditions. In May a crew of German journalists were arrested for filming an area under construction in preparation for the World Cup. In September, Qatar became involved in the Yemeni civil war by assisting the Saudi-led military campaign against the Houthi rebels. Qatar reportedly contributed with fighter jets followed by approximately 1,000 ground troops

Events in 2016
This year saw several severe incidents of the detentions, cutdowns and restrictions on media, where the authorities would detain journalists or media activists from enjoying their freedom of speech.

Qatar’s ground troops and pilots remained active in Yemen as a part of assisting the Saudi-led military campaign against Houthis. The coalition’s campaign had by this time been subject to wide criticism due to the enormous civilian consequences it had resulted in and it was assessed that weapons and aircraft manufactured by BAE Systems, exported from the UK, had possibly been involved in the death of civilians in Yemen.

Events in 2017
Following Saudi Arabia, Bahrain and the UAE’s announcement to end diplomatic ties with Qatar in June, Qatar decided to promptly end its military support of the Saudi led coalition in Yemen. Qatar’s involvement up to this date included actions that some deem as being tantamount to war crimes.

Other abuses continued. In October, the worldwide communication service Skype said that the application was being blocked by internet service providers in Qatar. Qatar’s two major internet service providers have remained silent on the block. Other voice calling services such as Viber and Whatsapp have also experienced blocked service. This suggests that the regime was responsible for serious limitations in the freedom of speech and access to information.

Finally, in December, Qatar signed a contract with the British weapons manufacturer BAE Systems to purchase 24 Typhoon combat aircraft valued at six billion pounds. This deal illustrates a wider trend of increased arms sales between Qatar and the UK in recent years.

Despite this catalogue of harm, the UK still deems it acceptable to sell weapons and arms to the Government of Qatar.  Human rights abuses continue.