Sudan: Country Overview
Sudan, officially the Republic of Sudan, is a predominantly Islamic country sharing borders with six other nation states. Egypt lays to the North, Libya to the North West, Central African Republic to the South West, Chad to the West, Eritrea and Ethiopia to the East, and South Sudan to the South, which gained independence from the north by way of referendum in 2011. It has a coastline to the East, on the red sea, a population of 39.5 million (2016). The capital city is Khartoum.

Omar Hassan al-Bashir, a former brigadier in the Sudanese Army, has been the self-declared president of Sudan since 1993 and leader of the National Congress Party since 1989, following a bloodless military coup that ousted the elected government of Sadiq al-Mahdi. Al-Bashir’s government is frequently described as an authoritarian regime.

The International Criminal Court (ICC) in the Hague has indicted the sitting president al-Bashir for crimes against humanity. On 14 July 2008, ICC Chief Prosecutor Luis Moreno Ocampo accused al-Bashir of directly “masterminding and implementing” genocide through a campaign of ethnic cleansing of the Fur, Masalit and Zaghawa ethnic groups. The arrest warrant is supported by NATO and international humanitarian organisations.

Since 2004 a UN arms embargo has been imposed on the Darfur region. Additionally, the whole of Sudan is subject to an EU embargo of ‘strategic goods’, though certain ‘dual-use’ military goods can be imported; protective clothing, mine action equipment and non-lethal protective equipment for humanitarian use. Sudan abstained from the UN General Assembly vote that adopted the Arms Trade Treaty in 2013. It is yet to ratify the treaty.

How many licences for the sale of arms to Sudan has the UK issued between 2008 and 2016?
The number of military export licences granted to Sudan was relatively low and consistent from 2008 to 2016. Despite a minor peak in 2011 with 25 granted licences, the general level has been on a low stable, with an average of 5,75 licences per year. However, a spike of 108 licences was issued under the Theresa May government in 2017, no less than 27 times more than the previous year.
In total, from 2008 to 2017, 177 arms export licences were granted by the UK to Sudan. 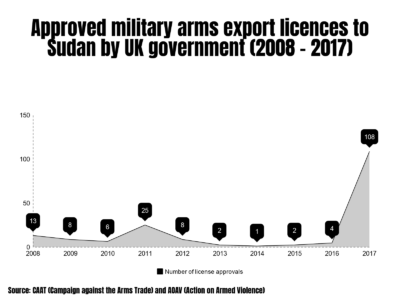 What is the total value of those exports in GBP?
The value of UK arms exports to Sudan between 2008 and 2017 totalled £0.29m and is therefore not of significant character compared to other of the FCO’s countries of concern. Moreover, 98% of the total values are attributed to sales at the beginning of the decade, from 2008-2011. During the past six years, the value has been at an almost constant zero every year, suggesting a limited arms export. 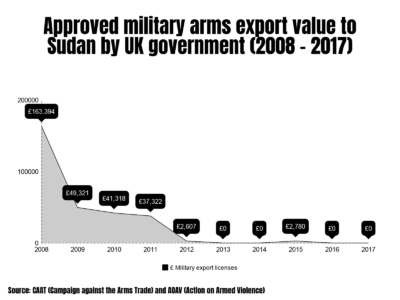 What are the top 10 types of arms export licences Britain selling to Sudan?
Whilst the data given above is just for military exports (single-use), when you consider both military and dual-use exports (dual-licences are permits to control all the material, software and technology that can be used for civil purposes like humanitarian aid, but also for military goals) the top ten export items requiring licences are as below.
‘Weaponry’ per se has not be sold to Sudan from 2008-2017. The list below includes cryptographic hardware and software, military helmets, body armour and protective vehicles. Whilst some of these items can be construed as military or military-related, they can equally be associated with humanitarian activities. Industrial chemicals have in the past been used for nefarious purposes, such as ammonium nitrate (a common fertiliser used in homemade explosives), although there is no such evidence concerning the list below is subject to the UN and EU embargoes.

Sudan was a colony of the British Empire from 1896, a series of events led to the independence of Sudan being declared in 1955. Since independence, the British supplied training and war materiel up until the Arab-Israel Six-Day war in 1967. From the late 1960s to the early 1970s the Soviet Union provided arms and technical assistant to Sudan. The army nearly tripled in size and large numbers of tanks, aircraft and artillery were acquired. Egypt and China latterly supplied arms and military support to Sudan. The US military sales to Sudan peaked in 1982 at $101m and were discontinued in 1987.

Sudan is fraught with economic, healthcare, food, conflict and refugee problems. Citizens have been living under the authoritarian government of al-Bashir for nearly thirty years. A government that came into power through a military coup in 1989. Following the disbandment of political parties, suppression of the press and the imprisonment of political opponents, in 1993 Omar al-Bashir declared himself president.

In February 2003 the Sudan Liberation Movement/Army and Justice and Equality Movement groups in Darfur took up arms against the Sudanese government for oppressing Darfur’s non-Arab population, starting the War in Darfur. The government responded with excessive violence and force, committing acts of ethnic cleansing against the non-Arab groups, leading to the deaths of hundreds of thousands and the eventual indictment of the sitting president at the ICC. Child soldiers have also been used in the conflicts.

Today, Sudan suffers from most human rights issues there is on the palette and Human Rights Watch ranks Sudan as having one of the world’s worst human rights records. The government security forces are accused of unlawful use of excessive force, attacks on media entities and targeting, harassing and arresting whoever exercises his or her right to freedom of expression, such as human rights defenders, activists, journalists and bloggers. Generally, the government imposes severe restrictions on non-violent protesters. The security forces are likewise accused of torture and ill-treatment against detainees and for its excessive use of force and human rights violations in the active conflicts in Darfur, South Kordofan and Blue Nile.

The sale of arms to the Sudanese government is likely to promote instability and perpetuate or reignite conflict in the region. However, the current export licences issued by the UK are mainly dual-use items, and there seems to be no evidence of the UK selling conventional arms to the Sudanese government. However, because the regime’s inclination to use violence against its population is daunting and alarming, the current dual-use exports are concerning, as there is no sufficient guarantee in place to ensure that these items will not be exploited to facilitate human rights violations.

What has the British government said about these concerns?
In 2017, the UK Foreign and Commonwealth Office (FCO) ranked Sudan as a ‘Human Rights Priority Country’ and addressed the serious violations of both human rights and international humanitarian law that continue to take place on an alarming scale. The FCO’s core human rights objectives in Sudan deal with, amongst others, conflict resolution and the widening of political space and the upholding of freedom of religious expression. In 2017 the FCO said that, “we continued to support the African Union-led peace talks, and regularly lobbied all sides to allow full access in Darfur for the peacekeeping mission UNAMID and for humanitarian actors across Sudan.”

In an attempt to curtail migration flows, the UK has over the past years been taking steps to improve relations with Sudan, given that Sudan is a key transit country for African migrants. A range of politicians, diplomats and human rights organisations have raised concerns for what has been describe as the UK turning a blind eye to the regime’s contravention of human rights and international law.

Despite this catalogue of harm, the UK still deems it acceptable to sell arms to the Government of Sudan. Human rights abuses continue.
For more from this investigation please go here.