Central African Republic: Country overview
The Central African Republic (CAR) is a landlocked nation in Central Africa, bordering Chad, South Sudan, Cameroon and Congo, with an estimated population of 4.5 million. The CAR’s political framework is that of a semi-presidential republic, where the president is head of state and the prime minister is the head of government. The CAR has a history of violent turbulence and instability and many, including the UN, has warned about the risk of the CAR becoming a ‘failed state’, haunted by regional and sectarian divisions. Outside the capital of Bangui, the government enjoys minimal control over the country as armed groups continue to fight for territorial control, at the loss of lives of many civilians. Since 2014, UN Peacekeepers have been deployed in the country to bring peace to an unstable situation.

The CAR acceded to the Arms Trade Treaty in October 2015 and has, among several conventions, also ratified the UN Convention Against Torture in 2016.

How many licences for the sale of arms to CAR has the UK issued between 2008 and 2017?
Arms exports from the UK to the CAR were minimal until 2014 when 15 licences were granted by the UK government, as the graph shows below. Though this remained relatively low and stable, with 17 and 7 approved licences in 2015 and 2016 respectively, there was a sharp increase in 2017, when the UK approved 122 military arms export licences to the CAR.

In total, from 2008 to 2017, despite the high levels of violence witnessed in the country, 172 licences for military arms exports were granted to the CAR by the UK. Of these, 71% were granted in 2017. 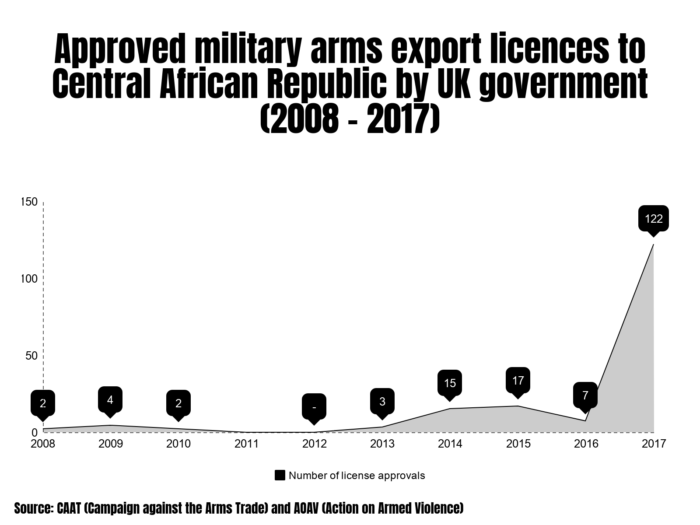 What is the total value of those exports in GBP?
As illustrated below, the value of the licences granted to the CAR from the UK has been relatively small, only breaking through the £05m mark once, in 2014, when it spiked to £0.65m. The following year, a similarly high value of arms export licences were recorded with almost £0.5m worth approved. Despite falling considerably the next year, 2017 again recorded one of the largest totals with almost £0.3m worth of licences. 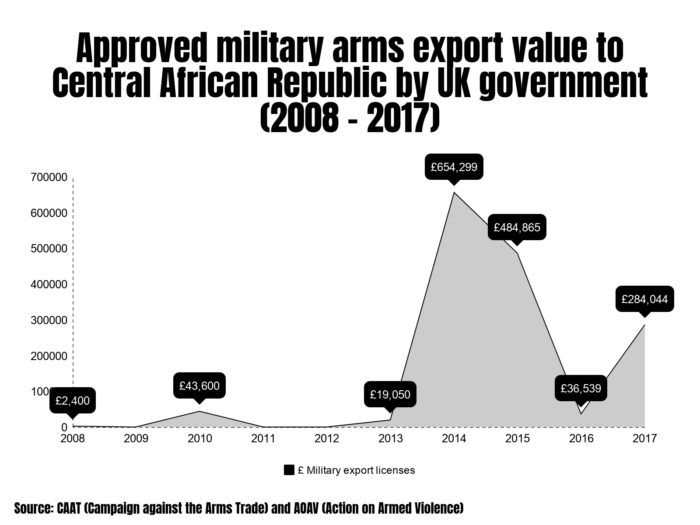 What are the top 10 types of arms export licences Britain is selling to the CAR?
Whilst the data given above is just for military exports (single-use), when you consider both military and dual-use exports (dual-licences are permits to control all the material, software and technology that can be used for civil purposes like humanitarian aid, but also for military goals) the top ten export items requiring licences are as below.
The most frequent sold weaponry to the CAR from the UK is that of security equipment and armour. A recurring theme on the list of items sold is that of surveillance equipment, especially that used for combatting cyber threats, though it cannot be discounted that such equipment could be used to monitor citizens’ movements online.  A variety of regular military equipment has also been sold, reflecting the country’s state of civil war against regime forces and armed rebels.

Why should British citizens be concerned about arms sales?
The widespread human rights abuses that proliferate in the CAR have led to a complex humanitarian situation, with major political actors implicated in the most serious type of abuses over recent years. There is a fundamental lack of control across the country by the state authority, with an almost complete absence of the rule of law in many places and significant levels of dysfunction within the state security services.

For several reasons, then, it is concerning that the UK continues to approve the provision of arms to the CAR regime with arms. For while armed rebel groups remain responsible for much of the harm imposed on the civilians, the regime is also behind serious human rights violations.

The regime is accused of violating the laws of war in their operations against the armed groups. The UN reports that the government security forces have failed to protect civilians; makes no distinction between civilians and rebels; committed arbitrary killings; and have been involved in arbitrary arrest and detention. The administration of justice is seriously dysfunctional, and the government has been incapable of protecting its civilians or establishing secure and fair state institutions around the country.

Furthermore, arms sale to the CAR poses an additional matter of concern, as repeated evidence points to a widespread and uncontrolled grey arms market.  This raises the spectre of military equipment flowing from the hands of ‘official’ entities to non-state actors.

The risk of crisis and conflict in the CAR continuing into the future is substantial, and as long as the regime does not comply fully with international humanitarian law nor enjoys full control of the arms its receiving, the UK’s delivery of arms risks fuelling the conflict further.

What has the British government said about these concerns?
In 2018, the UK government said: “the UK is concerned at the fragile security and human rights situation in CAR, with indiscriminate attacks on civilians by armed groups, including killings, torture, sexual assaults, abductions, extortion and looting.” Human rights abuses by the government itself were not mentioned.

Jonathan Allen, UK Ambassador to the UN has, however, called upon “political, religious and community leaders to stop incitement to violence on religious and ethnic grounds” and said that ”those in positions of leadership have particular responsibility for their words”.

Most recently, together with the US and France, the UK has put a hold on the CAR’s request to the UN Security Council to approve a Chinese weapon delivery.  The three permanent security council members have raised concerns over the lethality of some of the requested equipment.

What evidence is there of human rights abuses that the CAR government have committed since 2010?

Events in 2010
In February, rebels from the Armée Populaire pour la Restauration de la Démocratie (APRD) killed 18 Chadian cattle-herders between Bossangoa and Poua near the border with Chad. The APRD were also deemed to have been involved in the murder of 18 members of the Peuhl ethnic group, near Markounda.

Events in 2014
Between January and March, executions, torture and forced displacement took place in the towns of Paoua, Bozoum, Yaloké, Mbaiki and Boda, across a region roughly 200km north of Bangui. Apparent links between the recently exiled Bozizé presidential guard and anti-Balaka militia begin to emerge as the militia groups acquire military equipment and weaponry.

Events in 2015
OCHCR reported that the security and human rights situation continued to be a serious matter of concern, as the number of human rights violations increased by over 70 per cent in comparison with reporting conducted in 2014.  The outbreak of sectarian violence in Bangui led to a rise in violations of international law, carried out, to some extent, by government forces, who reportedly were responsible for serious human rights violations, including arbitrary killings, ill-treatment, arrest and detention.

Events in 2016
Local groups continued fighting for territory, largely at the expense of civilians. The UN and Reuters reported that at least 100 people were killed and 10,000 displaced in Bria in the northeast following ethnic killings in November.

Events in 2017
Human Rights Watch reported that at least 249 civilians were killed by various armed groups between May and September, as violence continues in many parts of the country, especially in the Basse Kotto, Haut-Mboumou, Mboumou, Ouham and Ouham-Pendé provinces. However, the exact number of killed is estimated significantly higher. Generally, it was deemed that the regime continued to contribute to the CAR’s deteriorating human rights record, and completely failed to protect its civilians. Much of the harm was attributed to armed rebel groups, but the regime has repeatedly been taken inhumane and unlawful methods in use when fighting the insurgency, leading to a series of human rights violations.

Despite this catalogue of harm, the UK still deems it acceptable to sell weapons and arms to the Government of the Central African Republic.  Human rights abuses continue.