The Maldives: Country overview
The Republic of Maldives is a multiparty constitutional democracy with a population of approximately 395,000. It is a South Asian state, located in the Indian Ocean, boasting Malé as its capital. The state religion is Islam, and adherence to it is legally required by its citizens according to the Constitution. In October 2008, Mohamed Nasheed became the country’s first directly elected president in what were relatively free and fair elections.

The Maldives has neither ratified nor signed the Arms Trade Treaty. 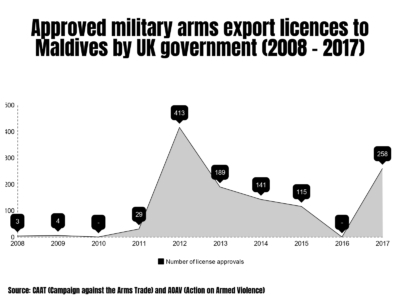 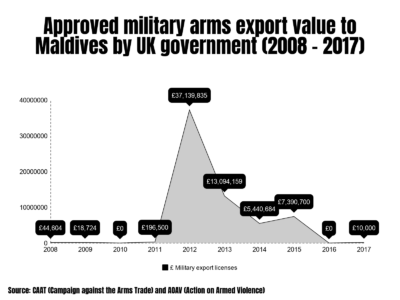 What are the top 10 types of arms exports licences Britain is selling to the Maldives?
Whilst the data given above is just for military exports (single-use), when you consider both military and dual-use exports (dual-licences are permits to control all the material, software and technology that can be used for civil purposes like humanitarian aid, but also for military goals) the top ten export items requiring licences are as below.
The most frequent type of weaponry exported from the UK to the Maldives is that of small arms ammunition. In the large, arms exports to the Maldives appear to be to arm local police forces and military.

Why should British citizens be concerned about arms sales?
The human rights situation in the Maldives has declined sharply in recent years. Reports from human rights organisations detail a dangerous environment for human rights defenders and other government critics. Reported human rights violations include restrictions on freedoms of speech and assembly, a politicized and inefficient judiciary, the use of flogging as a punishment, detention of political prisoners, restrictions on religious freedom, harassment and the murder of secularists and government critics.

Freedom of speech and assembly has been severely curtailed with the implementation of new laws designed to repress dissent and views critical of the government. A UN Special Rapporteur on the promotion and protection of the right to freedom of opinion and expression described the new ‘Protection of Reputation and Good Name and Freedom of Expression Bill’ as a direct attack on the exercise of the right to freedom of expression.

The government has been accused of failing to protect human rights defenders, bloggers and journalists. Threats and harassment of these groups have largely resulted in inaction from the police. The country has also witnessed a rise in Islamist extremism, with an increase in abuses of religious freedom and religious intolerance. The government’s failure to conduct credible investigations into the murders of secularists points either to incompetence or even possible complicity. This combines with statements from the President and police which may serve to fuel attacks on those who have allegedly offended Islam.

Security forces in the Maldives have increased attacks against peaceful demonstrators since the resignation of its first democratically elected president in 2012. A lack of condemnation from the standing government and a failure to investigate and prosecute state forces accused of using excessive force against protesters points to a culture of impunity. Such abuses violate international standards.

What has the British government said about these concerns?
The UK government has been critical of the deterioration of the human rights situation in the Maldives.

In 2016, the FCO stated: “2016 saw the Government of Maldives take further steps to squeeze democratic space and erode political and civil freedoms. The UK, along with other international partners, was vocal in raising concerns, including over the lack of an effective separation of powers, and the continued use of anti-terrorism legislation to silence opposition voices. Several high-profile political figures, including opposition leaders, received long sentences following trials that lacked transparency, judicial independence and failed to follow due process. The space for journalists and civil society to operate freely and independently was further reduced with the passing of a Defamation and Freedom of Speech Act. Several journalists were arrested, and news organisations raided, threatened or closed down. The Freedom of Assembly Act passed in August restricts the right of assembly and has been criticised as being unconstitutional.”

What evidence is there of human rights abuses that the Maldives government has committed since 2010?

Events in 2010
Human rights reports described allegations of arbitrary arrest, unauthorized recording of telephone conversations, harassment of journalists, restrictions on religious rights, the unequal treatment of women, and violations of worker rights as some of the most pressing human rights issues. A specific case of concern was when Police Integrity Commission (PIC) reported that a woman was physically and sexually abused inside a police car by four police officers, driven around the city for an indeterminate period, made to strip her clothes, and thrown out of the car onto the street. According to the report, the police discharged the four officers involved, but no formal charges were made.

Events in 2011
The UN High Commissioner for Human Rights, Navi Pillay, urged the parliament of the Maldives to end the practice of flogging women found to have engaged in pre-marital sex. Pre-marital sex is a crime in the Maldives, under a legal system which is a hybrid of common and Islamic law.  Women disproportionately receive such flogging sentences. As of 2011, 9 out of 10 sentences for flogging in the Maldives in 2011 were listed as having been given to women. Futhermore, there had not been one conviction for rape in three years. During the same visit to the country, Pillay also condemned the rise of religious intolerance in the country. The country’s constitution bans any faith other than Islam and stipulates that only Muslims can become citizens.

Events in 2012
The resignation of president Mohamed Nasheed triggered violent demonstrations between supporters of the president and security forces. According to a report released by Amnesty International, security forces committed a string of human rights violations against protesters, including beatings, arbitrary detentions and torture. The report also states that not a single criminal case had been filed before a court against any police officer for violations committed at that time. Testimonies collected detail a catalogue of human rights violations including torture, beating and sexual assault. One woman claimed to have been stripped naked and subjected to various forms of sexual assault.

Events in 2013
Among the reported human rights violations were for instance assaults on sexual minorities. Reports described how Maldivian police arrested two men in Vilimale, accusing them of engaging in a ‘homosexual act’.

2013 saw much political turmoil; it was reported how security forces had attacked non-violent demonstrators, including MPs, journalists and bystanders. Amnesty International also reported that detainees in Maldivian prisons were subjected to torture and other ill-treatment. Beatings, pepper-spraying in the eyes and mouth, denial of access to drinking water and in some case, incarceration in dog cases, were all reported as methods used by the authorities. Amnesty also pointed to severe weaknesses in the judicial system, allowing impunity for human rights abusers.

Events of 2014
Among the violations reported in this period were allegations of ill-treatment of detainees, arbitrary arrests and assaults against religious and sexual minorities as well as political activists.

On April 20, police raided a private music festival, ransacked the belongings of the attendees and held 79 of them in handcuffs overnight. Some of those arrested were exposed to torture and other ill-treatment. Police then refused to provide details on whether any action would be taken against the officers involved.

On August 8, journalist Ahmed Rilwan was abducted outside of his home. Rilwan was known for being a vocal critic of Islamists and local politicians. The police initially denied allegations of a forced disappearance despite a number of reports from eyewitnesses. The UN High Commissioner for Human Rights said Rilwan’s disappearance was worrying “given that 15 journalists have reported receiving death threats through anonymous text messages just in the first week of August.” Rilwan’s family issued a statement the following year alleging police involvement in the disappearance. To date there have been no prosecutions in the case.

Events in 2015
Former president Mohamed Nasheed, and the country’s first democratically elected leader, was sentenced to 13 years in prison on terrorism charges after illegally ordering the arrest of a judge in 2012. Amnesty International described the trial as “deeply flawed and politically motivated”. His arrest, detention and trial were strewn with allegations of human rights violations. He was denied legal representation and the right to appeal, and two of three judges had also been acting as witnesses against him during the prior investigation. Nasheed also alleged that he was denied medical attention while in police custody. The UN Working Group on Arbitrary Detention released a statement condemning the violations of his legal rights during his detention, describing it as a “violation of International law”.

In 2016, Nasheed was given asylum in the United Kingdom, where he had gone for medical treatment.

Events in 2016
On April 16, a group of journalists and supporters demonstrated outside the offices of the president, protesting moves by the government to clamp down on freedom of the press. Police arrested 16 journalists and used pepper on the demonstrators, resulting in three people reportedly requiring hospital treatment.

Authorities in the Maldives raided the offices of the local newspaper, the Maldives Independent, along with a human rights NGO, after an al-Jazeera documentary aired corruption allegations against the country’s president, Abdulla Yameen. The documentary featured an interview with the editor of the publication. The Maldives Broadcasting Commission subsequently released a statement claiming that anyone found disseminating the documentary would be liable for defamation.

Events in 2017
The Maldivian authorities reportedly continued to ignore constitutional provisions that safeguard the right to a fair trial, and a series of criminal cases against political opponents continued regardless.

On April 23, blogger and human rights activist Yameen Rasheed was brutally murdered. Rasheed was a vocal critic of Islamist extremism, corruption and incompetence within the government. He was arrested in 2015 after taking part in an anti-government rally in the capital. “Any failure on the part of the Government to follow due process in investigating and establishing accountability will raise serious suspicions of state complicity in his murder” were the words of John Samuel, executive director of Asian Forum for Human Rights and Development.

Generally, state-sponsored violations of the rights to freedom of expression and peaceful assembly continued. The criminal justice system was reportedly used by the authorities to cut off political opponents, human rights defenders and civil society in general.

Despite this catalogue of harm, the UK still deems it acceptable to sell weapons and arms to the Government of the Maldives.
Human rights abuses continue.
For more from this investigation please go here.