UK arms exports to other countries of concern
Facebook2TweetLinkedInPinEmail

The United Arab Emirates: Country overview
The United Arab Emirates (UAE), located in the Persian Gulf bordering Oman and Saudi Arabia, is a federation of seven semiautonomous emirates with a resident population of approximately 8.1 million, of whom an estimated 11 per cent are citizens. Sheikh Khalifa bin Zayed Al Nahyan has been the UAE’s president since 2014, although the Crown Prince Mohammed bin Zayed Al Nahyan of Abu Dhabi exercises most executive authority.

How many licenses for the sale of arms to the UAE has the UK issued between 2008 and 2017?
The UAE has received a very high number of licenses from the UK government for arms. The number has risen since the Coalition government came into power and has stayed high since. The first year of the Coalition, 2010, saw the number of licenses granted more than double to 844. By 2017, with the UAE involved in the catastrophic war in Yemen, this had risen to 1,471. In total, from 2008 to 2017, 9,003 export licenses were granted by the UK government for the UAE, including 6,038 dedicated exclusively for weapons and military equipment. 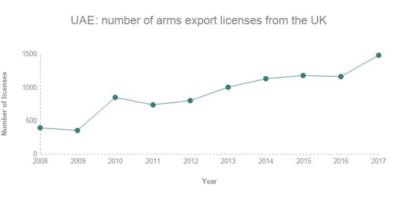 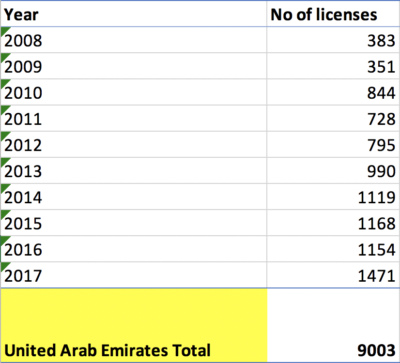 What is the total value of those exports in GBP?
Even though the military equipment is the most exported license to UAE, its value is relatively low if it is compared with the dual-use material. UAE bought £887m worth of weaponry while it dedicated £6.4bn for equipment which can be used both by civilians and military forces, such as cyber surveillance material. 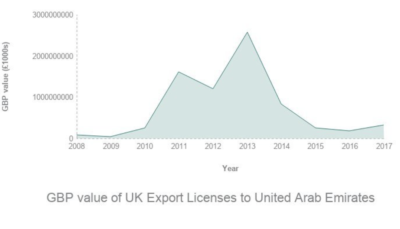 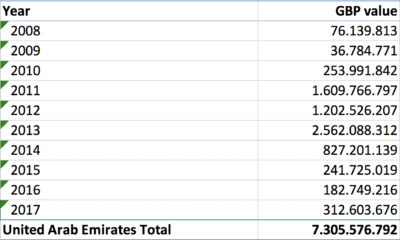 What are the top 10 types of weaponry Britain is selling to the UAE?
The most recurrent items on the export list are surveillance items, specially designed to conduct cyber surveillance. Such equipment can be used to spy on its citizens, especially on social media, and to identify “threats” to the dictatorship. The UAE’s surveillance capabilities have led to numerous arrests of civilians for activities on social media. Moreover, equipment for aerial warfare appears on the list, which also is a matter of concern given the UAE’s doubtful conduct in its war in Yemen.

Why should British citizens be concerned about arms sales?
The UAE is an authoritarian regime where serious human rights violations happen on a daily basis. Despite a lack of transparency that makes it difficult to assess the extent human rights problems, three core human rights issues continue to be reported.  These are: citizens’ complete inability to change or reform their government; limitations on citizens’ civil liberties (including the freedoms of speech, press, assembly, and association); and a lack of judicial independence. Moreover, social and legal discrimination, enforced disappearances and torture are among the reported human rights issues.

The UAE’s security forces are also responsible for human rights violations overseas, particularly in Yemen, where UAE is a coalition member of the Saudi-led coalition that has been accused of indiscriminately targeting civilians in its military campaign against the Houthis. The war has left the already poor country in one of the world’s biggest humanitarian crisis, with millions of Yemenis on the brink of famine, the outbreak of a huge cholera epidemic and with a total death toll that includes 10,000 dead civilians. UK arms have reportedly been used in these military activities.

The UK and the UAE’s trade relationship is a strong one, and the UAE became the third largest importer of UK arms between 2012 and 2016. Moreover, one of the world’s largest arms fair DSEI, that takes place in London, is owned by the UAE.

Continued UK arms sales to the UAE, though, poses a matter of serious concern.

First of all, UK arms sales risk maintaining an authoritarian regime, responsible for numerous and systematic human rights violations. Moreover, many weapons held by the Emirates are exported to war-torn states such as Sudan, Libya, Eritrea and Somalia, in contravention of UN Arms Trade Treaty. Knowing this, transferring arms to a country that potentially end up violating human rights in a third state is possibly a breach of UK and international law.

Several European countries, including Spain and Norway, have in response to the human rights violations in Yemen, halted arms sales to coalition members, including Saudi Arabia, w

In comparison, several European countries, including Spain and Norway, have in response to the serious allegations of violations of international humanitarian law in Yemen, halted arms sales to coalition members, including the UAE. This is an example the UK government is highly encouraged to follow, at least until the UAEs human rights record, domestically and internationally, sees serious improvements.

What has the British government said about these concerns?
Despite critical voices from British civil society and opposition parties, the UK government has neither halted nor decreased its arms sale to the UAE. The UK has largely been silent about human rights violations by the UAE regime, which is viewed by the UK as a suitable human right promoting partner.

The UK government has actually deepened its warm relationship with the UAE, where travel, trade, education and the arts flow freely and on a large scale between the two countries. The UK government considers the UAE as an important post-Brexit trading partner, and bilateral trade is expected to double to £25 billion by 2020. Reportedly, the UK strategy towards the UAE is to use “soft power” mechanisms to support the government’s declared commitment to “support for stability… reduced inequalities… poverty eradication”.

What evidence is there of human rights abuses that the UAE government have committed since 2010?

Events in 2010
The UAE’s human rights record reportedly deteriorated in 2010. One of the most concerning issues was migrant workers’ lack of rights, while other issues involved torture; restrictions on freedoms of expression and association; violations of women’s rights; the prevention of peaceful demonstration;  and the harassment of local human rights defenders.

Events in 2011
The critical human rights record remained more or less unchanged in 2011. Despite the fact that 2011 saw no reports of torture nor the use flogging as a judicially sanctioned punishment, there were still reports of police and prison guard brutality, arbitrary detention and people being held incommunicado. Testimonies continued to list torture in prisons that, on occasion, led to the death of prisoners.  The regime continued to harass citizens’ private life, and to restrict their civil liberties, including limiting their usage of the Internet. A particular worrying incident took place in April when UAE security forces arrested Ahmed Mansoor – a well-known blogger and human rights activist. He was held in solitary confinement for at least seven days and was denied access to his lawyer and family. After his arrest, he and several other human rights activists signed a petition demanding constitutional and parliamentary reforms. These actions were met with further harassment.

Events in 2012
The human rights situation in the UAE reportedly deteriorated in 2012. The regime intensified its efforts to mute critics of the royal family, and political activists faced arbitrary detentions and deportations, their lawyers finding themselves exposed to harassment and intimidation. In 2012, the authorities detained 61 human rights defenders and civil society activists without charge, solely based on claims that they aimed to harm national security. Detainees continued to report that they had been exposed to ill-treatment, amounting to torture, during their time under arrest. Some courts reportedly ordered punishments based on Sharia Law. This meant the use of flogging as punishment for crimes such as adultery, prostitution, consensual premarital sex and pregnancy outside marriage.

Events in 2013
No significant improvements were reported to the UAEs human rights record this year. Suppression of human rights defenders and civil society activists continued together with unfair trials and violations of migrant workers’ rights. For instance, in July, 69 protesters were convicted after a trial where the evidence used against them was reportedly obtained during systematic torture at state security facilities.

Events in 2014
In 2014, a counter-terrorism law was passed in the UAE. The new law gave the regime the ability to prosecute non-violent critics, political opponents and human rights defenders as terrorists. Peaceful and legitimate activities could now be prosecuted as terrorism offenses, that could lead to the death penalty. Moreover, a repressive cybercrime law from 2012 was increasingly used to prosecute political opponents. In March 10, two citizens were sentenced five years in prison and thousand-dollar fines for talking critical of the regime on Twitter.

Events in 2015
2015 saw no discernible improvements in the UAE’s human rights records. An anti-discrimination law was passed, which further restricted free speech and the regime denied activists critical of the UAE’s treatment of migrant workers access to the country. Abroad, the UAE engaged in the Yemen conflict as a leading coalition member, spearheaded by Saudi Arabia. The UAE’s engagement has since 2015 mainly relied on aerial power as well as counterterror efforts, where they in cooperation with Yemeni forces, are fighting Al Qaeda and ISIS cells in southern parts of Yemen. Human rights groups reported how UAE forces were involved in a range of human rights violations, including excessive force during arrests, detaining children with adults and forcibly disappearing dozens. Detainees reported that they had been subject to abuse and torture in prisons run by the UAE and its allies.

Events in 2016
The regime deployed advanced surveillance software in its targeting of political activists, and the state-sponsored spying had wide-range consequences for the freedoms of speech in 2016. In August, the regime was apparently behind an attempt to hack the human rights defender Ahmed Mansoor’ iPhone. Around 300 Emiratis were detained for expressing their dissenting opinions on social media.

Moreover, the UAE’s security apparatus’ ill-treatment and torture continued to be a matter of concern, a matter raised both by human rights groups, the UN and individuals. The son of a former advisor to Egypt’s then President Morsi reported how he had been exposed to “brutal physical and psychological torture” by the security forces who wanted him to confess his membership in the Muslim Brotherhood. The UAE continued to be active in the Saudi-led coalition in Yemen, who by 2016 had been subject to widespread criticism due to the high civilian death toll such intervention had caused.

Events in 2017
The human rights situation in the UAE saw no improvements in this period. Amnesty International even noted that the “level, frequency and severity of human rights violations has sadly skyrocketed” during the year. There were other concerns, too. Al Jazeera reported that the UAE had transferred British-produced arms to the renegade Libyan general Khalifa Haftar, a man who is accused of serious crimes and abuses, including the indiscriminate bombing of civilian areas and summary executions. The UN’s Libya Sanctions Committee report also claimed the UAE had provided Libya military with aircrafts, such as attack helicopters, which constituted a violation of UN-backed international sanctions against the regime. The military equipment was reportedly acquired by the Emirates from various trading partners.

The regime continued to implement restrictions relating to electronic information and online expression and association. Several people were prosecuted under the 2012 cybercrime law and the 2014 anti-terrorism law – prosecutions that were described as unfair and not in line with international fair trial standards. Among the arrested was the prominent Emirati rights defender Ahmed Mansoor, who was charged for exercising his right to free expression.

In Yemen, the UAE continued to participate in the Saudi-led coalition against the Houthis. Since 2016, the conflict has, according to the UN, killed at least 16,700 people, including 6,475 civilians. The actual figures are likely to be significantly higher. The UN report, released in August 2018, pointed to the Saudi and UAE airstrikes as the main explanatory factors for the high civilian tolls. The report said that the coalition’s 18,000 strikes in less than three years “certainly contributed to Yemen’s dire economic and humanitarian situation.” Finally, the report concluded that all parties to the conflict, including the Houthis and UAE have committed crimes amounting to war crimes.

Despite this catalogue of harm, the UK still deems it acceptable to sell weapons and arms to the Government of the United Arab Emirates.