Turkmenistan: Country Overview
Turkmenistan, at 5.5 million, is the least populous of the Central Asian republics. It borders Kazakhstan, Uzbekistan Afghanistan and Iran and has a coastline on the Caspian Sea. Its population is 85% Turkmen, 5% Uzbek and 4% Russian. It has the sixth largest natural gas reserves in the world, citizens are provided with electricity, water and gas free of charge.

According to Human Rights Watch, “Turkmenistan remains one of the world’s most repressive countries. The country is virtually closed to independent scrutiny, media and religious freedoms are subject to draconian restrictions, and human rights defenders and other activists face the constant threat of government reprisal.”

Since 2007 Turkmenistan has been ruled by President Gurbanguly Berdymukhamedov, also commander-in-chief of the national army. Berdymukhamedov, like his predecessor, characterised as an autocratic ruler in a censorious country where no opposition party is permitted. Turkmenistan is yet to ratify the 2013 Arms Trade Treaty adopted by the United Nations. The 2014 World Press Freedom Index ranked Turkmenistan third worst for freedom of the press, after North Korea and Eritrea.

How many licences for the sale of arms to Turkmenistan has the UK issued between 2008 and 2016?
As depicted in the data below, the number of arms export licences granted to Turkmenistan remained relatively low throughout the decade, only with minor deviations in 2011-2012 where the number exceeded the usual handful seen in the other years.
The constant low number, however, took a dramatic change in 2017, where the number spiked 15000% compared to the previous year. The number of licences granted in 2017 represents 65% of the decade’s total exports. 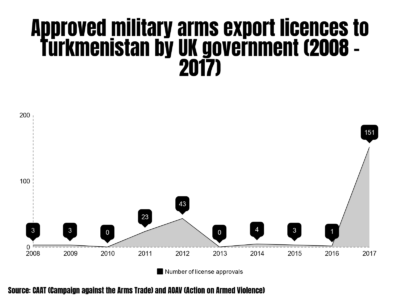 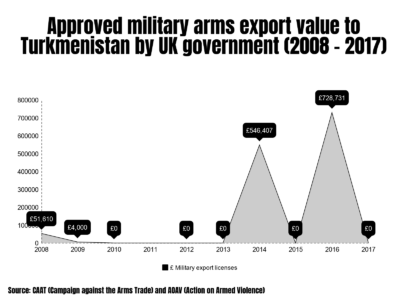 What are the top 10 types of arms export licences Britain selling to Turkmenistan?
Whilst the data given above is just for military exports (single-use), when you consider both military and dual-use exports (dual-licences are permits to control all the material, software and technology that can be used for civil purposes like humanitarian aid, but also for military goals) the top ten export items requiring licences are as below.
The list of UK exports to Turkmenistan features ancillary and component military equipment and cybersecurity equipment. Inertial equipment is a navigational type of equipment that keeps a moving object on course, applications for this are widespread, from guided munitions to aircraft.
Whilst there is an implicit military capability in the exports to Turkmenistan, these licences are not tantamount to arms supply, but may have the same effect in that they enable the mechanised nature of military capability to function, where previously it may not have been able to. The category here is somewhat ambiguous.

Why should British citizens be concerned about arms sales?
Turkmenistan has been referred to as “the nearest thing you can get to a textbook example of an authoritarian dictatorship,” and according to Human Rights Watch, President Berdymukhamedov’s regime controls all aspects of public life.

The regime has monopolised media, exacting a propaganda machine on the population. Free media and independent journalism do not exist, and if they try to report from within Turkmenistan, they are likely to face harassment and arrest. Moreover, the regime blocks access to international media outlets, as well as access to social media platforms. The violation of freedom of expression also expands to religious and political minorities, as the government effectively bans those religious or political opinions divergent from the party line.

Human rights organisations report torture and ill-treatment of prisoners. The UN Committee Against Torture reported in 2017 about “consistent allegations of widespread torture and ill-treatment, including severe beatings, of persons deprived of their liberty, especially at the moment of apprehension and during pre-trial detention, mainly in order to extract confessions”.

Human Rights Watch has denounced the export of all kinds of technological equipment to the Turkmenistan government warning that it strengthens its surveillance capacities frequently used to violate citizen rights.

The UK’s exports to Turkmenistan is problematic as it not only tacitly implies an endorsement of Berdymukhamedov’s authoritarian rule, but risks sustaining it. The gravest concern stems from the UK’s significant export of ‘dual-use’ information technology equipment and questions should rightly be raised concerning cryptographic equipment and information security equipment and capabilities within the context of the country’s widespread censorship. There are no end-use stipulations that guarantee that cyber capabilities won’t be used for privacy infringement and human rights violations. In fact, there is substantial evidence that similar equipment is being used for exactly those ends.

What has the British government said about these concerns?
The British government has repeatedly addressed and criticised the Turkmenistan regime for its track record abusing human rights, exemplified by placing it on the list of ‘Human Rights Priority Countries’. In 2017, the UK Foreign and Commonwealth Office (FCO) decried the human rights situation as, “continued allegations of torture and poor prison conditions, and no visible improvement in gender equality, freedom of expression, of religion or belief, of speech and of movement (…) The presidential election did not offer voters a meaningful choice of candidates. Human rights defenders continued to operate largely from outside the country.” The FCO goes further to criticise Turkmenistan in making little effort in implementing several international conventions on human rights, despite being a signatory to them.

The UK government stresses that it will continue supporting the human rights process, both by working together with the EU and other countries but also bilaterally, where it says it will bring up the matters of concern to the government in question.

Despite this catalogue of harm, the UK still deems it acceptable to sell weapons and arms to the Government of Turkmenistan. Human rights abuses continue.