Uzbekistan: Country overview
The Republic of Uzbekistan, landlocked in Central Asia, borders Kazakhstan, Kyrgyzstan, Tajikistan, Afghanistan and Turkmenistan, and has an estimated population of 32 million. President Islam Karimov, who ruled the country from 1989 until his death in 2016, governed the country with very limited political freedom offered to his people, a population subjected to widespread surveillance by the regime. His successor, Shavkat Mirziyoyev, is reportedly taking steps to improve the country’s human rights record, but violations still occur. As of 2018, Uzbekistan has neither signed nor ratified the Arms Trade Treaty.

How many licences for the sale of arms to Uzbekistan has the UK issued between 2008 and 2017?
The number of arms export licences granted for Uzbekistan has generally been at a low level, and in six of the reported years, zero there zero licences have been approved. The only deviations were in 2012, 2016 and 2017, where there respectively were issued 20, 15 and 37 licences. The latest spike, between 2016-2017, therefore, constitute 70% of the total number of arms licences in the reported ten-year period.
It is notable that the spike happened in the aftermath of the Brexit referendum. 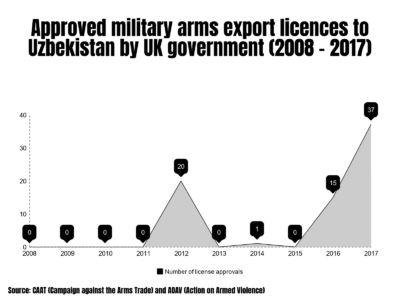 What is the total value of those exports in GBP?
The value of the arms exports has been relatively small, but – notably – have increased alongside concerns about human rights in recent years. Arms sales to Uzbekistan rose during the Lib-Con Coalition government and peaked under the current government in 2017, with £127.000 worth of arms equipment being shipped to the dictatorship. In total, from 2008 to 2017, £0.25m. worth of licences has been sold to Uzbekistan by the UK. Of these, 50% represents exports from 2017 alone. 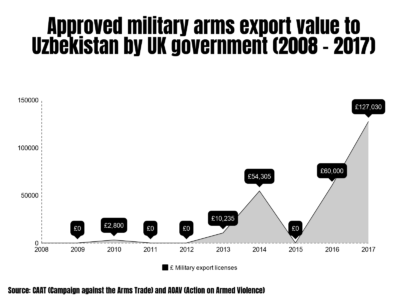 What are the top 10 types of arms exports licences Britain is selling to Uzbekistan?
Whilst the data given above is just for military exports (single-use), when you consider both military and dual-use exports (dual-licences are permits to control all the material, software and technology that can be used for civil purposes like humanitarian aid, but also for military goals) the top ten export items requiring licences are as below.
The most recurrent items on the export list are surveillance equipment, especially those designed with an eye towards cyber surveillance. This software can be used to spy on citizens, especially those on social media, who might post a “threat” to the regime. The Uzbek government’s surveillance has led to numerous arrests of civilians for activities carried out on social media.

Why should British citizens be concerned about arms sales?
Uzbekistan’s human rights records have been highly problematic, and the country has been described as “a nightmarish world of rampant corruption, organized crime, forced labour in the cotton fields and torture.”

In 2017, the Freedom House rankings rated Uzbekistan as one of the least free countries in the world, based on its authoritarian regime, lack of space for opposition parties, strictly controlled media, corruption, torture, political prisoners, and – finally – for widespread surveillance against protesters.

Under the old regime, human rights activists were targeted, and religious rights trampled on. Uzbekistan has been widely criticized for its use of forced child labour, especially in the cotton production. Moreover, the regime’s surveillance and close monitoring of human rights defenders and political opponents, have led to thousands of unfair trials followed by long, and arbitrary prison sentences.

Despite the new president Shavkat Mirziyoyev declaring his ambitions to reform the country, major improvements have yet to be seen.

In the midst of this worrying human rights record, the UK has continued to provide the country with arms. Due to a highly politicized incident involving UK-manufactured goods, there was, however, a ban on arms exports to the country from 2005-2010. In May 2005, government forces had gunned down as many as 500 people in an incident known as the Andijan Massacre. Reportedly, the government forces in question utilized the Defender vehicle, which was designed by Land Rover and had found its way to Uzbekistan through the Turkish company Otokar. The event, although involving technology and equipment considered by some to be “dual-use”, highlighted the loopholes in export laws that permitted UK goods to end up in the hands of despotic governments.

In response to the massacre, the UK government banned the export of weapons and related materiel to Uzbekistan and in 2008, the export ban was further expanded to include the export of “dual-used” technology. Unfortunately, these rules were then repealed in 2010 as the EU had lifted its own restrictions in December of 2009.

Despite signs of improvement in Uzbek human rights records, it is a matter of concern that the UK in recent years has resumed its arms export to an authoritarian regime, with the risk of enabling and even strengthening state-surveillance and suppression of political opponents and human rights defenders.

What has the British government said about these concerns?
The British government has, throughout the last decade, addressed its concerns about the human rights situation in Uzbekistan, criticizing the regime for not adopting the Universal Periodic Review recommendations, which include the lack of freedom of expression, poor criminal justice procedures, and the use of torture against detainees.

However, the newest statement from the FCO reflects more positive human rights developments, with the British government praising Uzbekistan for its re-engagement with international human rights. Of note was the regime allowing the UN High Commissioner for Human Rights to visit Uzbekistan for the very first time.

Despite this improved – yet far from ideal – human rights record, the FCO makes clear that it has a strong and “mutually beneficial cooperation” with Uzbekistan, on matters pertaining to political, commercial and security issues. The FCO states its intention to work to “to boost trade and investment between Britain and Uzbekistan, develop strong political, economic, cultural and defence ties, give effective consular protection to British nationals and, in partnership with the Uzbekistan government, work on shared goals in international development.”

The FCO says that it addresses Uzbekistan’s human rights issues through implementing programmes promoting issues such as the rule of law, prison reform, press freedom, media plurality and women’s rights and by monitoring the issues of forced labour in the cotton production.

Arms sales and trade in general with Uzbekistan is a part of Theresa May’s ‘global Britain’ framework, especially in a post-Brexit context. May’s favouring of authoritarian regimes at the expense of the respective populations’ basic freedom, however, is a matter of deep concern.

What evidence is there of human rights abuses that the Uzbeki government have committed since 2010?

Events in 2010
President Karimov’s treatment of human rights defenders and other political activists was subject to widespread criticism, and they reportedly faced major restrictions on their freedoms of both expression and assembly; many were sentenced to lengthy prison terms. Generally, the judicial system was accused of being corrupt and lacking independence from the regime.

Events in 2011
Amnesty International, the last international human rights monitoring organization, was forced to close its offices in Uzbekistan. Other leading human rights organizations, including the British Broadcasting Corporation (BBC), Radio Free Europe/Radio Liberty (RFE/RL), Agence France Press (AFP), Deutsche Welle (DW) and Voice of America (VoA) had all been expelled in 2005 following the Andijan Massacre. This marked an all-time low in the transparency of human rights conduct in Uzbekistan.

Despite restricted access, Human Rights Watch released a report that provided evidence of systematic and widespread practice of torture in Uzbek prisons, where methods such as including electric shocks and asphyxiation were reported. The human rights organisation criticised western governments for ignoring the practice, including the EU’s lift of sanctions two years ago.

Events in 2012
A particular incident of concern in this period was when the Uzbek citizen Obidkhon Nazarov survived an assassination attempt in Sweden in February of this year. Nazarov had fled to Sweden in 2006 and was strongly critical of President Islam Karimov’s rule. The Swedish court found that Uzbekistan’s secret services were, in all likelihood, behind the attack.

Events in 2013
Uzbekistan’s cotton industry remained subject to widespread criticism. It was reported how the forced labour, authorised by the government, was systematic, and out of the million people affected by it, where most children between 16-17 years old and adult. The U.S. State Department found that “Uzbekistan remains one of only a handful of governments around the world that subjects its citizens to forced labour through implementation of state policy.” Like in the previous years, the Uzbek government continued to suppress all kind of political activism, punishing critical voices with physical violence, prosecution, huge fines, and arbitrary detention.

Events in 2014
An Uzbek preacher, known for his criticism of the Uzbekistan government, Abdullah Bukhari, was assassinated in Istanbul, Turkey on December 10th.   His death was allegedly the result of a coordinated strike between both Uzbek and Russian intelligence services.

Widespread use of torture continued to be reported in the country. The International Committee of the Red Cross announced in April, that it would end monitoring the conditions in Uzbekistan’s prisons due to lack of sufficient access to the facilities or detainee. Such a move is very unusual and only happens in the most severe of cases.

Events in 2015
The regime continued in 2015 its widespread violation of fundamental freedoms, most notably surrounding freedom of speech. Thousands of political activists, religious minorities, human rights defenders and journalists were imprisoned. Their cases were reportedly said to be of particular concern as their sentences could be prolonged in an arbitrary manner. Finally, the presidential election that took place this year was likewise subject to criticism, as it did not permit freedom of political expression. Despite constitutional restrictions preventing such, President Karimov won another five years term.

Events in 2016
After 27 years of rule, President Karimov died, and former Prime Minister Shavkat Mirziyoyev was installed as his replacement. However, no significant improvements were reported relating to human rights legislation, despite the new president’s declared ambitions to do so. The regime continued to control and restrict its population in various ways, in particular, clamping down on freedoms of association, expression and religion.

According to the U.S. State Department, Uzbekistan continued to use anti-terrorism laws as a pretext for the detention of religious and political activists. Despite some reforms that included shortening the maximum period of suspect detention from 72 hours to 48 hours, most laws are still vaguely worded and easily used as justification for suppressing dissent.

Events in 2017
There were some reported signs of human rights improvement following the death of Islam Karimov in September of 2016. Although his successor, Shavkat Mirziyoyev, is considered by some to be a member of the “old guard”, he appeared to be encouraging (or at least permitting) progressive changes. Political prisoners and journalists were released from prison, media outlets and civic activists were permitted to criticize the government, and some bans on religious activities were lifted.

Despite signs of improvements, serious violations, such as torture and political prosecutions, persisted, and journalists and human rights defenders were constantly faced either with political charges or were subjected to public smear campaigns. The regime’s widespread, arguably unlawful, surveillance of its population continued the suppression of political activists. The regime reportedly carried out unlawful surveillance, limiting Uzbek’s citizen’s ability to receive and share information.

Despite this catalogue of harm, the UK still deems it acceptable to sell weapons and arms to the Government of Uzbekistan.
Human rights abuses continue.
For more from this investigation please go here.