China: Country overview
The People’s Republic of China is the world’s most populated country with a population of 1.4 billion. Located in Central Asia, China shares its borders with no less than 14 neighbouring countries. Although still governed by the centralized Communist Party of China (CPC) since the revolution in 1949, the country has undergone immense economic changes and is today one of the biggest players in the global market and international affairs. Xi Jinping assumed power as the President and General Secretary of the CPC in 2013 and has ruled the country with a tight grip on the CPC, civil society, and the political life of Chinese citizens. China has been subject to an EU-imposed arms embargo since the violent suppression of protests in Beijing in 1989.

As of 2018, China is yet to ratify and sign the Arms Trade Treaty.

How many licences for the sale of arms to China has the UK issued between 2008 and 2017?
Although the embargo upon China has applied since 1989, the UK has interpreted it as a prohibition to sell lethal weapons, military vehicles and equipment that could potentially be used for domestic repression. Thus, from 2008 to 2017, the UK government has still approved 1,229 were military arms export licences – though it has also approved thousands of more dual-use goods that could be used to carry out human rights injustices.

As shown below, China has been a relevant and constant market for the UK. Arms export licences have remained steady in the past decade, though approximately doubling compared to most the previous years. With an average of 113 military arms export licences in the first nine years examined (2008 to 2016), 215 is a considerable increase. 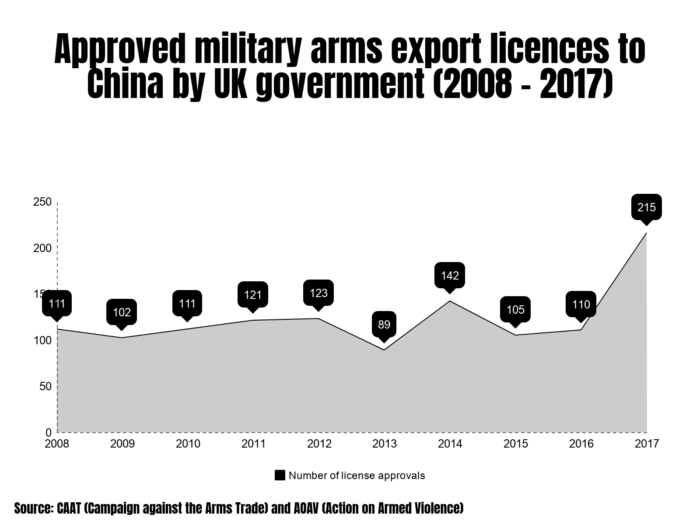 What is the total value of those exports in GBP?
Between 2008-2017, China was one of the UK’s largest market for arms exports. Whilst the value of approved military arms exports have been rather consistent across this period, with an average of £20m worth of approved military arms exports per year over the examined period, there were two considerable spikes. One occurred in 2013 and one in 2015, with £64m and £30m respectively.

In total, the UK approved £202m worth of military arms exports to China. 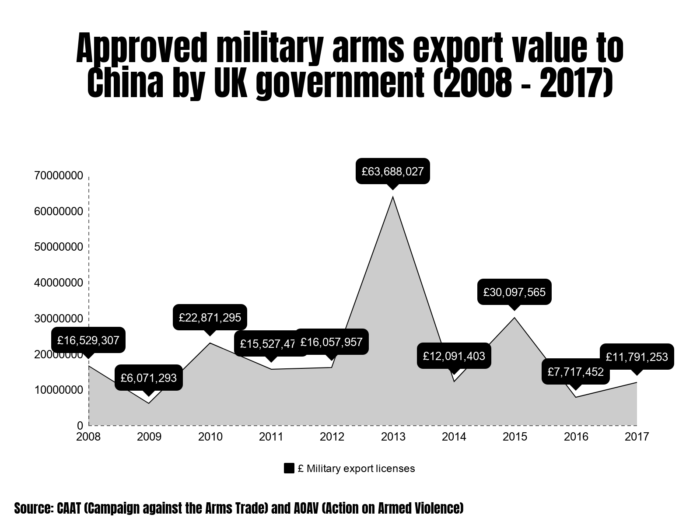 What are the top 10 types of arms export licences Britain is selling to China?
Whilst the data given above is just for military exports (single-use), when you consider both military and dual-use exports (dual-licences are permits to control all the material, software and technology that can be used for civil purposes like humanitarian aid, but also for military goals) the top ten export items requiring licences are as below. China’s most frequently purchased type of equipment befits a high-tech world power with an extensive security and surveillance network. In the list of the most exported items are information technology equipment and software that can be used for, among others purpose, spying on its citizens.

Why should British citizens be concerned about arms sales?
China is ruled by an authoritarian regime responsible for carrying out mass-scale human rights violations, including executions, torture, and extreme restrictions on the freedom of expression. Under President Xi Jinping, there has been a noted rise in the already repressive state-sponsored censorship programs. Freedom House has ranked China’s level of internet freedom as on the worst on earth and the regime is among others accused of collecting and analysing big data to target and arbitrarily detain its citizens.  In 2017, Nobel Peace Prize laureate Liu Xiaobo died in hospital under the supervision of Chinese authorities, highlighting the regime’s contempt toward human rights.

Currently, China is in the spotlight for its implementation of a wide-ranging system of algorithmic surveillance aimed to develop a ’citizen-score’ where citizens can be awarded for good behaviour and penalized for bad. The system has been developed to monitor all citizens’ movements and actions, physically and online, and will advance the regime’s capability to monitor disloyalty, dissenting political opinions and organized opposition. China’s expansion of their mass surveillance measures across the region should be considered a direct violation of citizens’ right to privacy, their freedom to assemble, and their freedom of expression.

UK’s sale of dual-use equipment is therefore highly concerning as it strengthens the surveillance abilities of the Chinese government. Even though the dual-use items do not directly, in their own capacity, violate human rights, they can contribute to the ongoing mass surveillance of Chinese citizens. Knowing this, it is highly problematic for the UK government to publicly denounce China’s extensive human rights violations while, for the sake of profit, potentially fuel those same violations.

What has the British government said about these concerns?
Being on the Foreign and Commonwealth Office’s (FCO) list of human rights-priority countries, the UK government has not been shy to address concerns regarding China’s human rights record. In 2017, addressing those concerns, it stated that “China continues to face significant human rights challenges, but throughout 2015 improved social and economic rights, and implemented reforms to strengthen the rule of law”.

The FCO stresses the importance of cooperating with China in order to improve its human right situation and assessed that this cooperation “contributed to a reduction in the number of crimes subject to the death penalty. We also believe it led to greater legal protection for victims of domestic violence and rape”.

However, as a member of the collective EU arms embargo, the UK has interpreted the Chinese arms embargo only covering lethal items (and components to assemble these), major military platforms such as warplanes, and finally “any equipment which might be used for internal repression”. This interpretation means that other items with potential military use have not been included in the embargo. The UK has continued to sell conventional military equipment that has benefitted the regime. The UK has, therefore, unlike other EU members, interpreted the embargo rather liberally.

Despite this catalogue of harm, the UK still deems it acceptable to sell weapons and arms to the Government of China.  Human rights abuses continue.
For more from this investigation please go here.