Iran: Country overview
The Islamic Republic of Iran has a population of 80 million and is located on the Eastern shores of the Persian Gulf, bordering Iraq, Turkey, Armenia, Azerbaijan, Turkmenistan, Afghanistan, and Pakistan. Since the overthrown of the monarchy in 1979, Iran has been a Shia-ruled Islamic Republic. President Hassan Rouhani, winning the presidential election in 2013, has continued the country’s record for repressive rule – especially against political activists and sexual minorities – despite campaigning for limited political and social reforms.

International sanctions against Iran were lifted following the US-Iran nuclear deal signed in 2015. Despite the US rejecting the agreement in 2018 and intending to reimpose sanctions, the sanctions are no longer in place for other countries, including the UK. Nevertheless, the UN and the EU implemented mandatory arms embargoes on Iran since 2006 and 2007, respectively.

As of 2018, Iran is yet to ratify and sign the Arms Trade Treaty.

How many licences for the sale of arms to Iran has the UK issued between 2008 and 2017?
The UK has not sold any military equipment to Iran during the past decade due to the UN and EU-imposed embargoes. However, 14 licences were approved in 2013, but as the following graph suggests, these licences were never used. 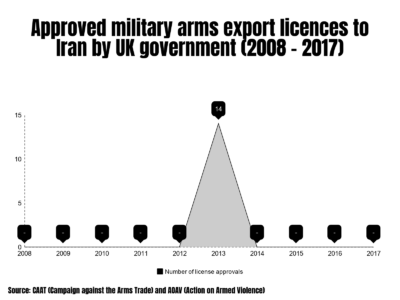 What is the total value of those exports in GBP?
The UK has not sold any arms to Iran during the reported period from 2008-2017. 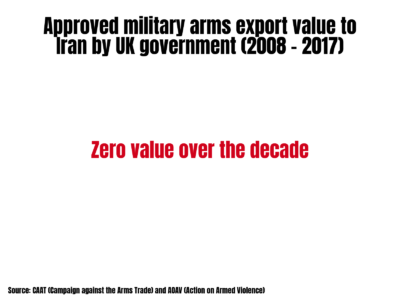 What are the top 10 types of arms export licences Britain selling to Iran?
Whilst the data given above is just for military exports (single-use), when you consider both military and dual-use exports (dual-licenses are permits to control all the material, software and technology that can be used for civil purposes like humanitarian aid, but also for military goals) the top ten export items requiring licenses are as below.
The UK government has respected the various arms embargoes on Iran with the majority of its export licences falling under the categories of civilian crafts and chemicals, why only dual-use items have been exported to Iran.

Why should British citizens be concerned about arms sales?
Iran is ruled by an authoritarian regime, notorious for its human rights violations ranging from executions of sexual minorities, extreme censorship, and violent crackdowns on political activists and human rights defenders. Nearly all media in Iran is government-controlled and online social media platforms are extremely restricted.

The country has seen several popular uprisings within the past decade, including the ‘green movement’ in 2009 and more recent political unrest in 2017 and 2018. However, all attempts toward political reforms or improving human rights were quickly suppressed by force. Citizens exercising their rights to freedom of expression and assembly are constantly met with charges of “acting against national security,” “propaganda against the state,” and “assembly and collusion to disrupt national security.” Numerous human rights defenders, activists, journalists and bloggers are regularly arrested.

Despite UK arms sales not violating the arms embargoes, there are still reasons to be concerned. The Iranian regime’s application of dual-use objects is never straightforward and, given the regime’s deeply concerning human rights record, there are no guarantees in place that dual-use items will not be used in support of human rights abuses.

What has the British government said about these concerns?
Iran appears on the Foreign and Commonwealth (FCO) list of human rights-priority countries. The British government has explicitly addressed Iran’s repeated failures to meet international human rights standards. In 2017, the FCO stated: “[…] Iran’s human rights record continued to cause great concern. President Rouhani pledged to improve the rights and freedoms of the citizens of Iran when he was elected in 2013. He also promised reforms on discrimination against women and members of ethnic minorities, and on greater space for freedom of expression and opinion. However, there has been little evidence of positive change.”

The FCO says it works hard to improve Iran’s human rights record, among others, by raising individual cases with the Iranian government and by addressing its concerns on Iran’s increased use of the death penalty.

However, the UK has welcomed the lifting of sanctions against Iran, encouraging increased trade and highlighting the many commercial opportunities available with an opening economy.

Despite this catalogue of harm, the UK still deems it acceptable to sell weapons and arms to the Government of Iran.  Human rights abuses continue.
For more from this investigation please go here.