North Korea: Country overview
The Democratic People’s Republic of Korea is located in East Asia. It borders China, Russia and South Korea; this country has an estimated 25 million population.

North Korea is one of the few countries still under a nominally communist rule; an authoritarian state led by the Kim family for more than 60 years. Kim Jong-un, the supreme leader of North Korea, took over from his father Kim Jong Il when he died in 2011.

Most of the world has isolated North Korea because of its nuclear ambitions; the country is subject to widespread sanctions. Both the EU and UN have imposed arms embargos on the country reaction to North Korea’s first-ever nuclear weapons test in 2006.

As of 2018, North Korea is yet to sign and ratify the Arms Trade Treaty.

How many licences for the sale of arms to North Korea has the UK issued between 2008 and 2017?
Following the isolation policies and the arms embargoes, the UK government has not exported single-use arms licences to North Korea in the last decade, meaning no weaponry has been sold to North Korea. The UK has strictly complied with the embargoes. 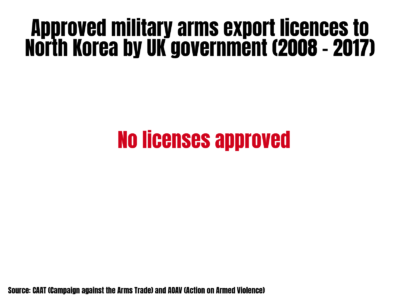 What is the total value of those exports in GBP?
North Korea is the only country of the FCO’s list of 30 countries of concern that it has not exported arms licences to in the recorded period from 2008-2017. 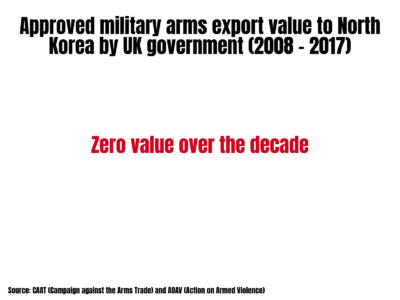 What are the top 10 types of arms export licences Britain is selling to North Korea?
Whilst the data given above is just for military exports (single-use), when you consider both military and dual-use exports (dual-licences are permits to control all the material, software and technology that can be used for civil purposes like humanitarian aid, but also for military goals) the top ten export items requiring licences are as below.
In almost one decade, the UK sold only five items to North Korea, all of them were for dual-use and were granted in 2013. Even though the UN Security Council approved the sale of small arms and light weapons to North Korea from 2009 to 2015, the UK did not export any kind of arms to the country.

Why should British citizens be concerned about arms sales?
North Korea suffers from serious and widespread breaches of international human rights. The government systematically carries out arbitrary arrests, unfair trials, disappearances, extrajudicial killings, forced labour and a vary of interferences on the private lives of their citizen’s, entering their homes without judicial authorization, monitoring conversations, and restricting their population’s freedoms of speech, press, assembly and movement.

Two of the biggest concerns are the regime’s capacity to spy on its own population and its development of nuclear weapons. Firstly, the government constantly controls and monitors their civilians’ private lives. It does not respect the constitutional provisions for the inviolability of privacy of the person and its correspondence, entering homes and tapping calls without authorization. The US State Department described this unlawful practice as a “massive, multilevel system of informants to identify those it sees as critics”.

Secondly, North Korea started a nuclear race with tests in 2006 and continued it in 2009, 2013 and 2016. In response, both the UN Security Council and the UN International Atomic Energy Agency ordered North Korea to “immediately abandon all nuclear weapons and existing nuclear programs in a complete, verifiable and irreversible manner” and to “abandon any other existing weapons of mass destruction and ballistic missile programs” and argue that those practices threaten peace and stability in the region and beyond.

Despite the demands, North Korea persisted in defending its nuclear weapons programme and has made public announcements claiming advances in the areas of nuclear warhead miniaturization and nuclear weapon delivery systems.

Such proliferation of weapons of mass destruction and missiles led to the UK to stop the arms exports to North Korea. The British government respects the international-imposed embargoes.

North Korea is the only country out of the FCO’s 30 ‘Human Rights Priority Countries’ that the UK does not supply with arms to.

What has the British government said about these concerns?
The FCO has disavowed the lack of freedom of expression, the existence of one million North Koreans victims of modern slavery, the malnutrition countrywide that also affects the Korean People’s Army and the broad range of violations against women, among others in North Korea.

The FCO has said that North Korea “continues to demonstrate no substantive engagement with the international community on human rights.” Moreover, the British government has denounced North Korea for refusing to allow an independent investigation of human rights violations in its country.

For more from this investigation into the UK’s arms trade, please go here.