Pakistan: Country overview
The Islamic Republic of Pakistan, located in South Asia, stretches from the Himalayas down to the Arabian Sea and is the world’s sixth most populated country, with a population of almost 200 million. Pakistan is a parliamentary republic, with power divided between the Prime Minister – Imran Khan – who wields the most power, and the President – Arif Alvi. Both of whom have occupied their positions since 2018.

As of 2018, Pakistan is yet to both ratify and sign the Arms Trade Treaty.

How many licenses for the sale of arms to Pakistan has the UK issued between 2008 and 2017?
As the graph demonstrates, the number of arms export licenses granted to Pakistan jumped after Theresa May was elected as British Prime Minister. In 2016, the number of licenses spiked to 411, almost twice that of the previous year. The spike continued into 2017 with 431 licences. 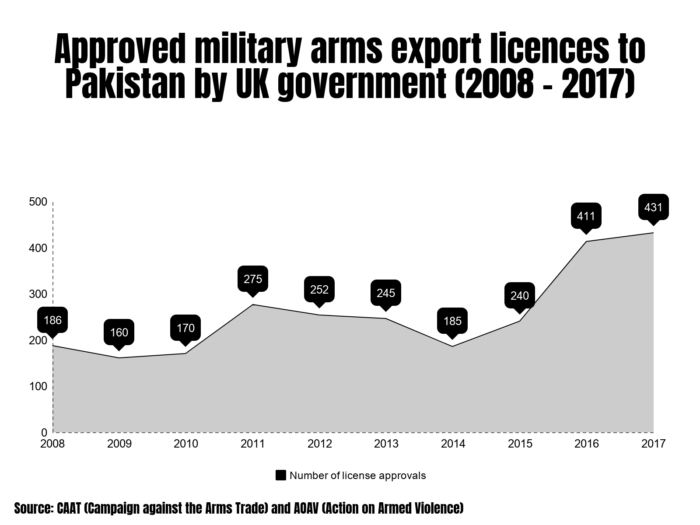 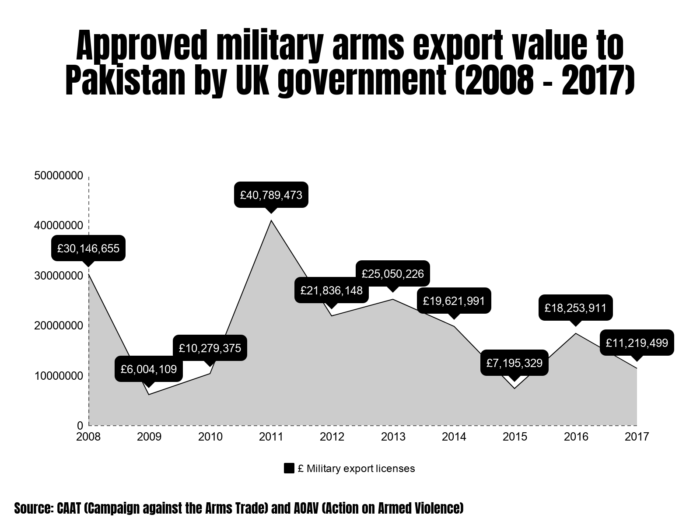 What are the top 10 types of arms export licenses Britain is selling to Pakistan?
Whilst the data given above is just for military exports (single-use), when you consider both military and dual-use exports (dual-licenses are permits to control all the material, software and technology that can be used for civil purposes like humanitarian aid, but also for military goals) the top ten export items requiring licenses are as below.
The UK has mainly provided Pakistan with weaponry associated with conventional war, such as guns and aircraft. However, surveillance equipment is also amongst the top ten military and dual-use equipment sold to Pakistan.

Why should British citizens be concerned about arms sales?
Serious human rights abuses are a matter of great concern in Pakistan. Among the government-sponsored violations are arbitrary detentions, torture, unlawful killings and severe restrictions on the freedom of expression. The government reintroduced the death penalty in 2014, which is concerning.cIn particular, the lack of a fair trial is very problematic.

The country, that is internally fighting the Taliban, has reportedly been arbitrarily detaining terrorist suspects without allowing them access to a lawyer, and have in some cases turned them over to US custody, which is a violation of international law.

The Pakistani regime has demonstrated concerningly authoritarian behaviour, especially against human rights defenders, journalists and citizens who exercise their freedom of expression. The regime has imposed serious restrictions to curb the freedom of the press, including a vague and broad cybercrime legislation which also allows for legal behaviour on the internet to be criminalised. The regime has also enacted a blasphemy law against journalists. Reportedly, Pakistan is one of the most dangerous countries for journalists, with state officials being responsible for the deaths of many journalists.

Pakistan is also known for its large black market for arms sales, and it is, for instance, said that guns are cheaper than most smartphones in some parts of the country. Especially in the north-western town of Darra Adam Khel, illegal arms are sold on an industrial scale, and local authorities have done very little to end this booming industry.

It is a matter of concern that the UK continues to sell arms to Pakistan for several reasons. First, given the regime’s violations of fundamental human rights, most recently its increased restrictions on freedom of speech online, it is problematic that the UK provides surveillance items, that potentially could be used to sustain and support this authoritarian behaviour.

Moreover, the general level of instability that characterises Pakistan, caused by the presence of terrorist cells and local militias; has led to an unrestricted dissemination of arms, which the rampant black market clearly illustrates. Therefore, there is no guarantee that ensures UK-exported weapons will not be used against innocent civilians.

What has the British government said about these concerns?
The FCO lists Pakistan as a ‘human rights priority country’, mainly based on the country’s resumption of the death penalty in 2014, the lack of religious freedoms, and the weak rule of law. The FCO stated in 2017 that it will work to improve the human rights situation and that “at the highest level, the UK made clear to Pakistan its opposition to the death penalty. We urged Pakistan to reinstate the moratorium and comply with international commitments” and that British ministers “repeatedly expressed concerns about violations of freedom of religion or belief and encouraged Pakistan to reform its blasphemy laws”.

There are no recent statements from the FCO that show concern over its sale of arms to Pakistan.

Despite this catalogue of harm, the UK still deems it acceptable to sell weapons and arms to the Government of Pakistan.  Human rights abuses continue.
For more from this investigation please go here.