Somalia: Country overview
Somalia is located in the Horn of Africa, bordering the Gulf of Aden, Indian Ocean, Djibouti, Ethiopia and Kenya and has an estimated population of 15 million. Somalia has been subject to years of political unrest and widespread violence, leading to serious violations of international human rights and humanitarian law, extreme levels of poverty, and a complete lack of human security. In 2012, an internationally-backed government was established, but despite slight steps towards stability, the situation in the country continues to be of concern – not least because the country is plagued by the presence of illegal groups, such as al Qaeda and al-Shabab, militias, alongside a number of violent government forces.

Since 1992, Somalia has been under an UN-imposed open-ended arms embargo. However, in 2007, the embargo was amended, and now the British government approves arms exports to the Somali Government Forces, though only for purposes that would help Somali security sector institutions.

As of 2018, Somalia is yet to both ratify and sign the Arms Trade Treaty.

How many licences for the sale of arms to Somalia has the UK issued between 2008 and 2017?
The number of arms licences granted for Somalia has remained relatively steady during the last decade, as in most of the years, between 20-30 licences have been approved. The lowest number of licences ever approved in the reported period was in 2009, with only four licences. The curve however spiked in 2012, where 51 licences were approved, which was more than the double compared to the previous year. Exports gradually declined since 2012, and the number of exports again reached a steady level around the 20s, one that has lasted until 2017. 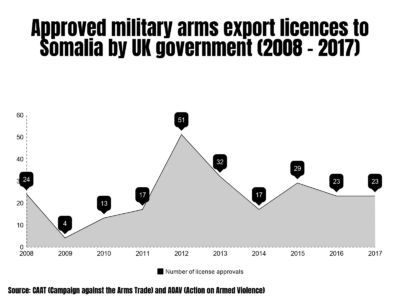 What is the total value of those exports in GBP?
Although Somalia is not the biggest arms market of the UK, the British arms approvals represented some £10.2m from 2008 to 2017 with an annual average around £1m. This comes amid some backlash pertaining to the official security forces and their human rights abuses. The total value has ebbed and flowed in the past decade, with peaks in 2010, 2013 and 2015 with values reaching respectively £1.6m., £2.3m. and £1.9m. Despite decreases, arms sales have taken place in every single of the reported years. 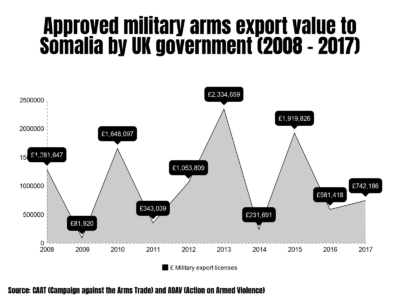 What are the top 10 types of arms export licences Britain is selling to Somalia?
Whilst the data given above is just for military exports (single-use), when you consider both military and dual-use exports (dual-licences are permits to control all the material, software and technology that can be used for civil purposes like humanitarian aid, but also for military goals) the top ten export items requiring licences are as below.
As seen in the ranking below, various cryptography equipment was the most frequently sold item by the UK to Somalia. Cryptography equipment was above all type of military supplies, even though most of the items and values sold corresponded specifically to military licences.

Why should British citizens be concerned about arms sales?
Throughout the long-running conflict in Somalia, the list of human rights violations in Somalia entails violations such as extrajudicial killings, arbitrary detentions, torture, restrictions of freedom of speech, and assembly to indiscriminate attacks on civilians.

Those responsible for the various human rights abuses, ranging from official security forces to clan militias and terrorists, largely go unpunished. Specifically, it is reported that government forces have committed sexual crimes, arbitrary arrests and detentions as well as unlawful killings. A UN report has even called out the government for committing “systematic abuses” and for allowing weapons to be transferred to non-governmental fighters, including al-Shabaab militants, concluding by saying that the allegations against the security forces could “cause damage to the legitimacy of the government”. The report further advocates for a strengthening of the arms embargo.

Arms sales to Somalia are, for obvious reasons, concerning. The UK government has, despite recognising the serious human rights abuses that take place with the government’s involvement, maintained a concurrent arms export. Given the lack of government control, dissemination of arms, and all parties’ inclination to use violence against civilians, an increase in arms to Somalia will most likely only fuel the situation further.

Furthermore, the sales of cryptography equipment might threaten citizens’ privacy, including the already affected freedom of the press. For instance, in 2017, the US State Department reported that several journalists were subjected to arbitrary arrest, for charges that were as trivial as meeting with colleagues.

What has the British government said about these concerns?
The UK places Somalia amongst the top 30 most concerning countries for human rights in the world, raising serious concerns for the east African country’s level of human rights abuses. Among the issues raised by the FCO are unlawful killings of civilians, indiscriminate targeting of civilians, and restrictions on the freedom of expression.

The FCO stresses that it will work hard to improve the wider security and impunity problems and will establish “effective human rights institutions and instruments”. The FCO has already funded several initiatives to support human rights developments. The FCO, however, recognises that its objectives are long-term “given the deep-rooted nature of Somalia’s human rights issues”.

There are no recent statements from the FCO commenting on its continued arms sale to Somalia.

Despite this catalogue of harm, the UK still deems it acceptable to sell weapons and arms to the Government of Somalia.  Human rights abuses continue.
For more from this investigation please go here.