Sri Lanka: Country overview
Located in the Indian Ocean, the Republic of Sri Lanka hosts of a population of 21 million. With a unitary semi-presidential constitutional government, Sri Lanka is ruled by both President Maithripala Sirisena and Prime Minister Ranil Wickremesinghe. The country has been plagued with a decades-long civil war between two ethnic groups: the Sinhalese and the Tamil. In 2006, the peace talks between Tamil Tiger rebels and government forces failed. Two years later, they put end to the ceasefire agreement. As a result, violence increased. The conflict officially ended in 2009, when the regime gained control of the remaining Tamil Tiger areas of control. Nevertheless, abuses by both parties continue.

As of 2018, Sri Lanka is yet to both ratify and sign the Arms Trade Treaty.

How many licences for the sale of arms to Sri Lanka has the UK issued between 2008 and 2016?
In the first half of the last decade, the UK did not issue a significant number of arms licences to Sri Lanka, why the remaining period from 2013-2017 represent 80% of the total number of issued licences.
As indicated in the chart below, the number of British military export licences to Sri Lanka peaked in 2013 and 2017. The first upward trend was under the Lib-Con pact, while the second, and highest, occurred after the Brexit referendum. Thus, 24% of total licences during the last decade were exported in 2017 alone. In total, from 2008-2017, 1,975 licences were granted to Sri Lanka. 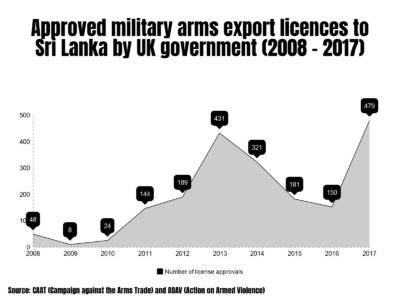 What is the total value of those exports in GBP?
The value of arms licences granted by the UK Government to Sri Lanka dramatically increased in 2013, to £37.4m. This constitutes almost half of the total sales in 10 years, that in total amounts to £84.6m. Both before and after 2013, the total annual value has been on an average of £5m. 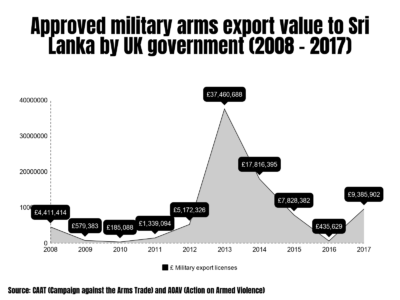 What are the top 10 types of arms export licences Britain is selling to Sri Lanka?
Whilst the data given above is just for military exports (single-use), when you consider both military and dual-use exports (dual-licences are permits to control all the material, software and technology that can be used for civil purposes like humanitarian aid, but also for military goals) the top ten export items requiring licences are as below.
UK arms export to Sri Lanka consists mainly of conventional military equipment, such as bullets, guns and armours. This is typical for a regime which prioritises rearmament, in consequence of years of internal conflict with armed groups.

Why should British citizens be concerned about arms sales?
Despite a noted optimism following social changes in government in 2015, in which both the media and civilians receive more freedom, progress is stalled. The country’s government continues to face serious accountability challenges following the political reconciliation in the aftermath of conflict with the Tamil Tigers. People who unlawfully were held in government custody were not released. Reports of the torture and ill-treatment of these groups by the police are commonplace. The government’s attitude towards reconciliation has, in large, been disappointing. Indeed, the government is failing to live up to the responsibility to secure reconciliation and respect human rights.

Despite improvements, in comparison to the previous government, reports continue to communicate concerns for the amount of unlawful surveillance, intimidation, and harassment carried out by security forces against the Tamil minority. In the light of continued lack of trust in the government following the three-decades-long civil war, it is irresponsible to maintain an arms sale to the Sri Lanka regime. On one hand, the UK addresses governmental surveillance on civilians, intimidation, and a lack of accountability for security forces. On the other hand, it sells military items to the same security entities. This is irresponsible.

What has the British government said about these concerns?
The UK has shown a strong commitment to supporting Sri Lanka’s human rights situation, which places among the worst in the world. Among abuses that the FCO addresses, is torture and lack of the rule of law. In 2013, the Commonwealth Observer Mission stated that during the regional elections in Sri Lanka, “opposition candidates and their supporters, as well as voters at large, faced instances of intimidation and harassment,” by the armed forces.

However, in that same year, the UK granted one of the largest amounts of weapons to the government of Sri Lanka. As the UK government grants millions of pounds on weaponry licences, it also employs efforts to support a stronger and more accountable police force. For example, the UK provides substantial financial support to Sri Lanka’s police reform, mediation, and the UN’s Peacebuilding Priority Plan. The UK government has not expressed concern about the parallel arms sales that take place in the midst of the human rights abuses.

Despite this catalogue of harm, the UK still deems it acceptable to sell weapons and arms to the Government of Sri Lanka.  Human rights abuses continue.
For more from this investigation please go here.