Syria: Country overview
The Syrian Arab Republic is bordered by Turkey, Iraq, Jordan, Israel and Lebanon, and has an population that stands at an estimated 21 million people. Since 2011, the country has found itself in a brutal civil war, one begun during mass public demonstrations that demanded the resignation of President Bashar al-Assad. That conflict rapidly evolved to involve several regional and international actors, spanning from government militia, the Free Syrian Army to Russia, Turkey, an international US-led coalition and several international militant Islamist groups, including ISIS. Millions of civilians have fled. Even more are internally displaced. Today the country witnesses massive human rights violations, very frequently against civilians.

In response to the violent repression of civlians by government forces, the EU imposed an all-encompassing arms embargo on Syria in 2011. In 2013, however, swathes of the embargo were lifted, following a disagreement between states about allowing the supply of arms to rebel forces in Syria. What remains is the prohibition of the transferance of arms and material from the EU that can be used for internal repression, which includes items such as equipment and software for useby the Syrian regime in the monitoring of communications, as well as a prohibition on weapons and other military equipment.

As of 2018, Syria is yet to both ratify and sign the Arms Trade Treaty.

How many licences for the sale of arms to Syria has the UK issued between 2008 and 2017?
As depicted below, the number of weapons licences sold by the UK to Syria has remained on a steady low for almost ten years. Neither transfers under the Lib-Con Coalition nor the arms embargo imposition in 2011 was to see a dramatic change in the number of sales of military equipment. This situation changed in 2017 when, under May’s government, there was a sharp spike from 10  military export licences being approved in 2016 to 114 the following year.
These arms export licences interestingly enough were agreed after the Brexit referendum.
It should be noted, however, that the information provided by the UK government does not specify how many of the licences were granted to the regime or to Syrian opposition groups.  It is assumed the majority were to the latter – if not all. 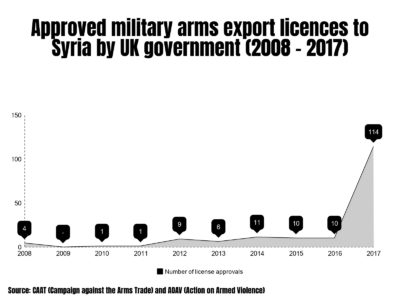 What is the total value of those exports in GBP?
The total value of arms licences exported to Syria during the past decade, £0.58m, is generally small compared to UK arms exports to other countries. Despite the relatively low values, there has since 2014 been a significant increase, as the value jumped from zero in 2013 to £271.440 in 2014. Therefore, the sales in the four past years, 2014-2017, constitute 87% of the total sales from 2008-2017. 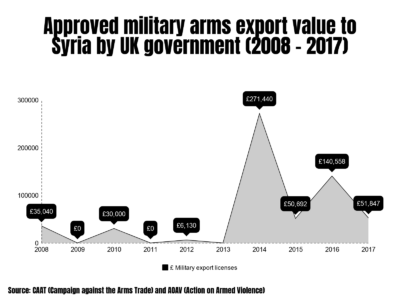 What are the top 10 types of arms export licences Britain is selling to Syria?
Whilst the data given above is just for military exports (single-use), when you consider both military and dual-use exports (dual-licences are permits to control all the material, software and technology that can be used for civil purposes like humanitarian aid, but also for military goals) the top ten export items requiring licences are as below.
The most frequently sold items to the Syrian regime and others entail both conventional military items as well as dual-use items, such as software and equipment that can facilitate surveillance.

Why should British citizens be concerned about arms sales?
The human rights situation in Syria is of deep concern, and was so long before 2011, with much concern levied at both the authoritarian Assad regime and the actions of armed opposition groups in the region (like ISIS etc.).

The Assad regime has long been accused of violating several fundamental human rights, including both that of freedom of expression and assembly, as well as widely employing torture and the death penalty. The regime’s restrictive attitude towards political opponents has, for example, led to unlawful detentions and reports of torture. Reports of ill-treatment and inhumane prison conditions have continued into the civil war, and 10,000 people are reported to have died in government custody since 2011. A UN report from 2016 found that ‘the Assad regime maintained a squalid prison system where torture and summary executions were deliberate policies.’

After the outbreak of the civil war, the Assad regime’s violations expanded to include possible violations of international humanitarian law. The regime has carried out disproportionate and indiscriminate aerial bombing and artillery bombardment that targeted public facilities such as hospitals and schools, causing heavy civilian casualties. There has also been the reported use of internationally-banned cluster munitions. Moreover, as a part of Assad’s tactics, his forces have besieged cities, using starvation as a strategy by blocking vital humanitarian aid, in direct violation of international law. Moreover, the regime has been reported to have carried out chemical weapons attacks on opposition-controlled areas, such as Hama and Khan Sheikhoun, also constituting a serious breach of international law.

Arming Syrian opposition groups is also a matter of concern. Even though the UK government supports this support, sending arms to an already unstable country threatens to prolong the instability. Selling weapons to a war-torn country, regardless of who to, rarely eases human suffering.

What has the British government said about these concerns?
Syria is among the FCO’s list of ‘Human Rights Priority Countries’ and the UK government has been very outspoken regarding the concern of human rights violations committed by all sides, not least the government.

The FCO has been very vocal in its criticism of the Assad regime, including the indiscriminate targeting of civilians and besieging of civilian areas.

The UK government has repeatedly iterated its strong commitment to supporting accountability for human rights abuses and violations in Syria, claiming it will do so through the UN Security Council.

The UK was, however, criticised, for granting export licences for dual-use items to a UK chemical company in 2012, which potentially can be used as nerve gas. Even though the licences eventually were revoked in response to the EU imposed sanctions, it is indicative of a worrying UK relaxedness to the issue of arms exports.

Despite this catalogue of harm, the UK still deems it acceptable to sell weapons and arms to the Syrian region. Human rights abuses continue.
For more from this investigation please go here.