Venezuela: Country overview
Venezuela is located on the northern coast of South America. It borders Brazil, Colombia and Guyana and has an estimated population of 31 million. Although the country has one of the world’s largest oil deposits and a range of other natural resources, the country has been suffering from a deep economic crisis. Nicolás Maduro was elected President in 2013, after the previous leader, Hugo Chávez, died after 14 years at the head of the country. Venezuela suffers from a high level of internal violence and crime, and has one of the highest murder rates in the world.

As a consequence of its human rights situation, the EU imposed an embargo on Venezuela in 2017. It includes an asset freeze, travel ban and arms embargo, embargo on equipment that could be used for repression, and restrictions on monitoring equipment.

As of 2018, Venezuela has neither ratified nor signed the Arms Trade Treaty.

How many licences for the sale of arms to Venezuela has the UK issued between 2008 and 2017?
The number of arms export licences granted to Venezuela remained steady until it started to peak in 2012 under the Lib-Con coalition government. In two years, from 2011-2013, the number of arms licences increased with 1200%, going from six to 78.
The following years saw a decrease, reaching a low of just three arms licences in 2015.  It, however, peaked again in 2017 in the immediate aftermath of Brexit, when 90 permits were granted – the highest peak in the last decade. These licences were approved despite the newly imposed EU-arms embargo.
In total, from 2008 to 2017, the British government approved 347 arms export licences to Venezuela. 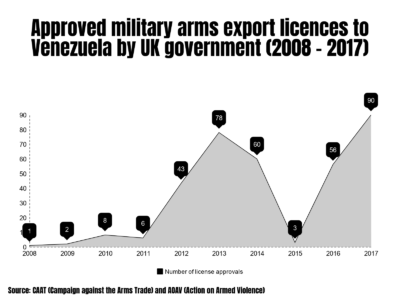 What is the total value of those exports in GBP?
As the graphic shows, most of the value of arms exports to Venezuela is attributed to sales early in the decade, as the sales in 2009 alone make up 38% of the total value of exports in the reported ten-year period. From 2010-2016, the sales have decreased, yet continued. However, no arms sale took place in 2017, hitting the lowest level in the past ten years.
In total, from 2008 to 2017, £2.4m worth of military supplies were sold by British firms to Venezuela. 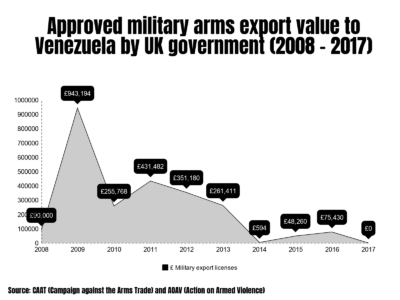 What are the top 10 types of arms export licences Britain is selling to Venezuela?
Whilst the data given above is just for military exports (single-use), when you consider both military and dual-use exports (dual-licences are permits to control all the material, software and technology that can be used for civil purposes like humanitarian aid, but also for military goals) the top ten export items requiring licences are as below.
Most of the weaponry granted by the UK to the government of Venezuela has been for surveillance and communications equipment, typical for a regime wishing to improve its capacities to spy on its citizens.

Why should British citizens be concerned about arms sales?
The Venezuelan regime is complicit in widespread human rights violations.

The regime has also detained and jailed several opposition party members and detaining people as political prisoners has become the norm.

Moreover, the prison conditions in Venezuela are reportedly extremely poor, and there are numerous reports of the use of torture and ill-treatment against detainees. This ranges from the use of electric shocks to sexual abuse. Yet impunity protects senior officers from prosecution.

UK arms exports also contradict with the FCO’s human rights concerns. The fact that the UK government continues with arms sales, even though not breaching the embargo, indicates not only a prioritization of profits over human rights but risks a direct contribution.

In 2016 for instance, licences that included equipment for crowd control were approved. When violent clashes broke out between protesters and security forces in 2017, the UK government failed to suspend its licences despite obvious misconduct on behalf of the regime.

What has the British government said about these concerns?
The UK government has bluntly addressed Venezuela’s concerning human rights record, placing the country on its list of ‘Human Rights Priority Countries’, indicating that particular concern and attention should be paid to Venezuela. The UK government has publicly condemned both former President Chavez and the sitting President Maduro’s rule, especially with regard to their violent response to demonstrations and protests.

In 2017, the FCO reported that human rights violations in Venezuela increased significantly, pointing to the lack of freedom of expression, torture and regime-sponsored violence. An OHCHR report published in September reported at least 124 deaths and the arbitrary detention of more than 5,000 individuals during the protests. Patterns of ill-treatment were reported, in some cases amounting to torture.

The FCO has also expressed its concern over the constant issue of violence and crime in Venezuela, noting that there are 14 million illegal weapons in the country.

The UK government stresses that it maintains its dialogue with relevant actors on human rights issues, and at the end of 2017 the FCO claimed to “continue to focus on concerns over the erosion of political freedoms and the adverse impact of the social and economic crisis (…)”.

Despite this catalogue of harm, the UK still deems it acceptable to sell weapons and arms to the Government of Venezuela.  Human rights abuses continue.
For more from this investigation please go here.