Zimbabwe: Country overview
The Republic of Zimbabwe is located in southern Africa, bordering South Africa, Botswana, Zambia and Mozambique, and has an estimated population of 16 million. President Mugabe ruled the country for nearly four decades until he was replaced in a military coup by Emmerson Mnangagwa in 2017. Mugabe was infamous for his tight grip on the poor and impoverished population, and his successor, Mnangagwa, is also associated with serious human rights violations that took place during Mugabe’s rule.

In 1996, in response to serious human rights violations committed by the regime, the EU imposed an arms embargo on Zimbabwe. The embargo prohibits exporters to “grant, sell, supply or transfer technical assistance related to military equipment,” alongside items that can be used for internal repression.

Although Zimbabwe signed the Arms Trade Treaty in 2014, it is yet to ratify it.

How many licences for the sale of arms to Zimbabwe has the UK issued between 2008 and 2017?
The number of exports licences to Zimbabwe has generally been low during the past ten years. Despite a ‘peak’ in 2011 with three licences and again between 2015-2017 with a total of eight, zero arms licences have been issued in the remaining years. 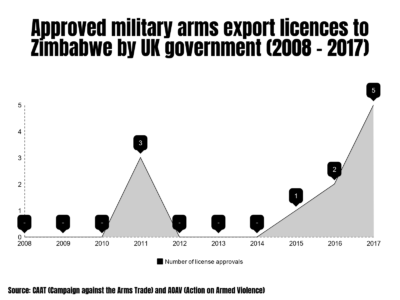 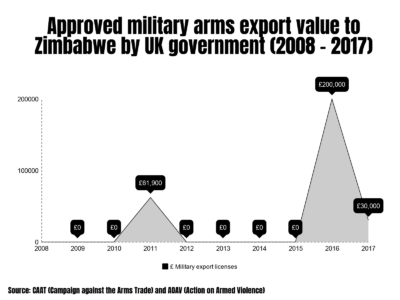 What are the top 10 types of arms export licences Britain is selling to Zimbabwe?
Whilst the data given above is just for military exports (single-use), when you consider both military and dual-use exports (dual-licences are permits to control all the material, software and technology that can be used for civil purposes like humanitarian aid, but also for military goals) the top ten export items requiring licences are as below.
As stated above, most of the equipment granted by the UK to Zimbabwe was for dual-use, which includes different types of surveillance equipment. According to Campaign Against Arms Trade (CAAT), all those exports “were approved in accordance with the sanctions in place”.

Why should British citizens be concerned about arms sales?
There are several reasons why one should be concerned with the UK supplying the Zimbabwe regime with arms, especially when it comes to dual-use items.

Mugabe’s notorious rule led to serious human rights violations, including repression of non-violent protesters, and generally, the regime restricted the right to freedom of expression exercised by human rights defenders, civil society activists, journalists and government opponents. Security officials have reportedly used excessive force to crush any opposition, and they are also accused of harassing, threatening and arbitrarily arresting protestors.

Due to widespread impunity, the majority of security officials guilty of committing human rights violations continue to go unpunished.

Because of the country’s concerning human rights record, it is problematic that the UK continues to provide arms sales to Zimbabwe. Although it recognises the regime’s systematic violations against non-violent political opposition, it is daunting that the UK continues its parallel export of items that have the potential to be used to oppress. And even if the items do not directly fuel repression, the trade relationship either indicates a UK recognition of the regime or a prioritisation of profit over human rights concerns.

What has the British government said about these concerns?
The UK government shows clear concern about the dire human rights situation in Zimbabwe, ranking it on its list of ‘Human Rights Priority Countries’. The government recognises that scores of the violations were attributable to the Mugabe, and now Mnangagwa regime, pointing to state-sponsored violence, politically motivated intimidation, discrimination, harassment and assault, violent policing, arbitrary arrests and torture.

The FCO noted in 2017 that despite a minor decrease in reported human rights violations, progress is long and slow..

The UK government stresses its efforts to ease the human rights situation in Zimbabwe. The FCO said in 2017 that the UK “will continue to call on the Government of Zimbabwe to uphold the rule of law and human rights, and to encourage all Zimbabweans to exercise their democratic rights, including through free, fair and credible elections, under the protection of the 2013 Constitution and international human rights law.”

The UK has implemented the UN-imposed arms embargo into UK law. The UK understands the arms embargo as covering all items on the UK Military List unless stated otherwise.

Despite this catalogue of harm, the UK still deems it acceptable to sell weapons and arms to the Government of Zimbabwe.  Human rights abuses continue.
For more from this investigation please go here.