Since late 2010, Action on Armed Violence (AOAV) has been examining the direct and indirect harm globally from explosive weapons.  Since that time we have looked at English language media reports on a daily basis, examining credible coverage of explosive violence incidents around the world.  Here is a snapshot of our top-line findings.  For more granular details, please visit our Explosive Violence Monitor page here. 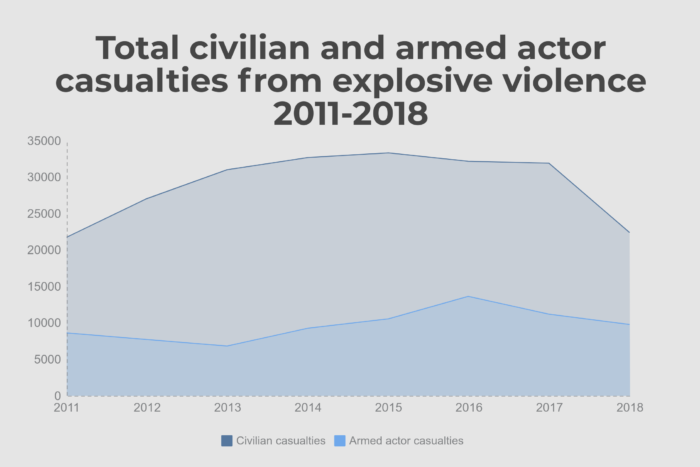 Over the last eight years (2011-2018), civilian casualties have accounted for three-quarters of total casualties recorded from explosive weapon harm. Between 2011 and 2015, AOAV recorded an increase year on year of civilian harm. That tide turned 2016 when there was a decline in civilians being killed or injured by explosive weapons, a drop that continued through to 2018. It is not clear if this is a decrease in civilian harm or may reflect fatigue in conflict reporting, especially with regard to injuries.  If you just look at civilians killed, every year between 2011 and 2017 saw an increase in the numbers reported killed, with a drop only in 2018. In total, over 230,000 civilians have been killed or injured in this period – on average 79 civilians were killed or injured everyday. 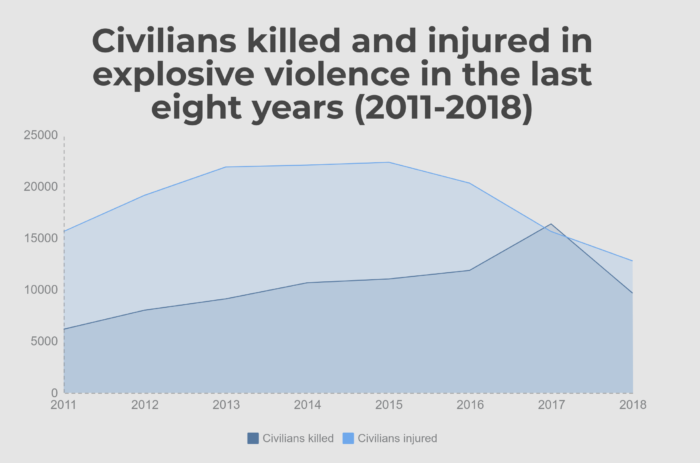 Civilian deaths over this eight-year period have accounted for 36% of total civilian casualties. Indeed in 2017, AOAV recorded more civilian deaths than injuries – it is likely many injuries were not reported, particularly in conflicts such as Syria and Yemen. An increase in the fatality:injury ratio, however, may also be down to a lack of access to healthcare, as medical infrastructure is damaged and destroyed throughout the violence.  This renders conflicts deadlier, and leads to injuries being harder to record. 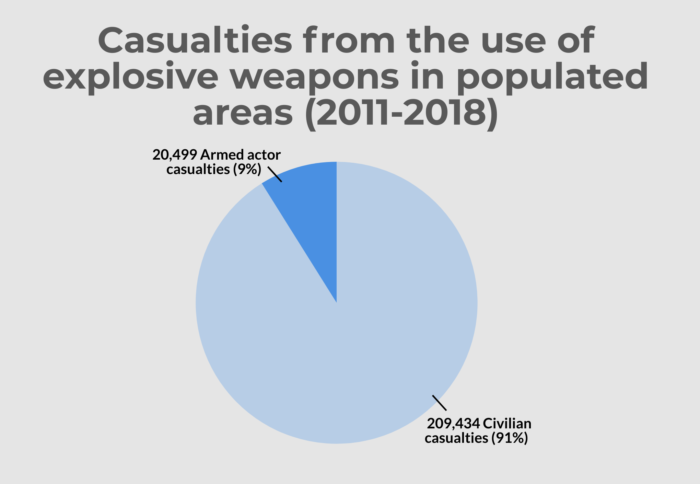 When explosive violence was used in populated areas between 2011 and 2018, over nine in every ten casualties were civilians. This has been a pattern consistently seen throughout the course of AOAV’s monitoring. 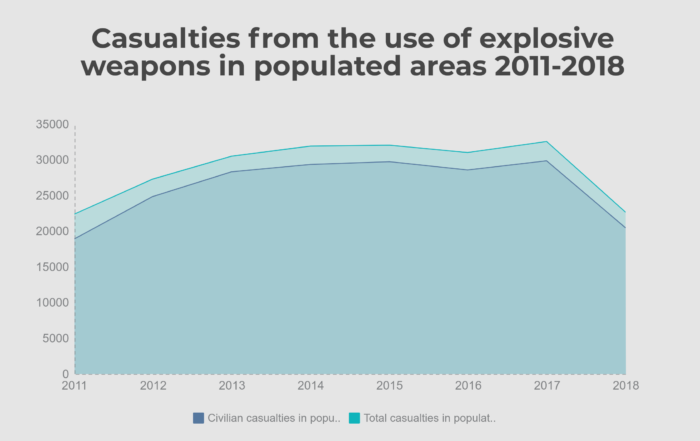 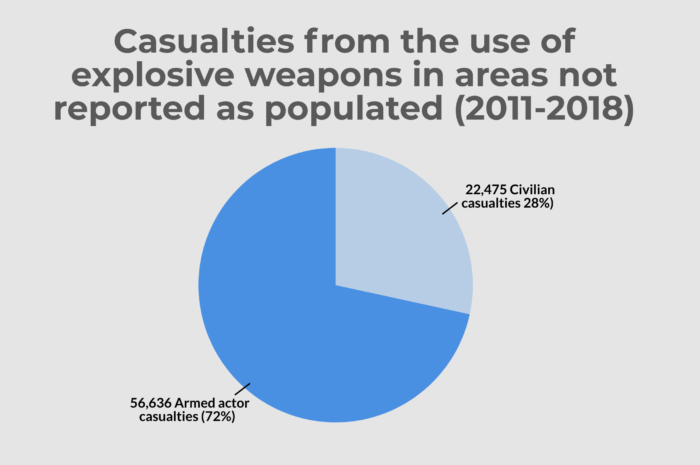 Alternatively, when explosive weapons have been used in areas not reported as populated – this typically includes areas such as agricultural lands, armed bases, roads in remote locations and other areas where dense civilian populations are unlikely – civilians account for less than 30%, or three in every ten, of the casualties caused.

AOAV has repeatedly found that when explosive weapons are used in populated areas, particularly those with wide-area effects, civilians are highly likely to make up the majority of those killed and injured.

While the fact that 119 countries and territories have seen at least one death or injury from explosive violence shows the global nature of the harm. 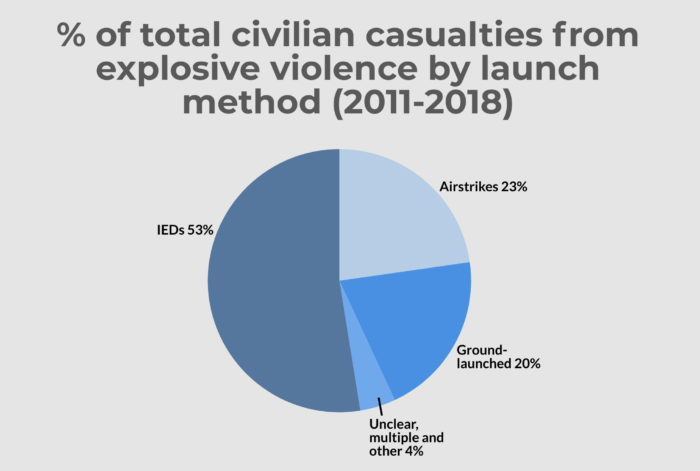 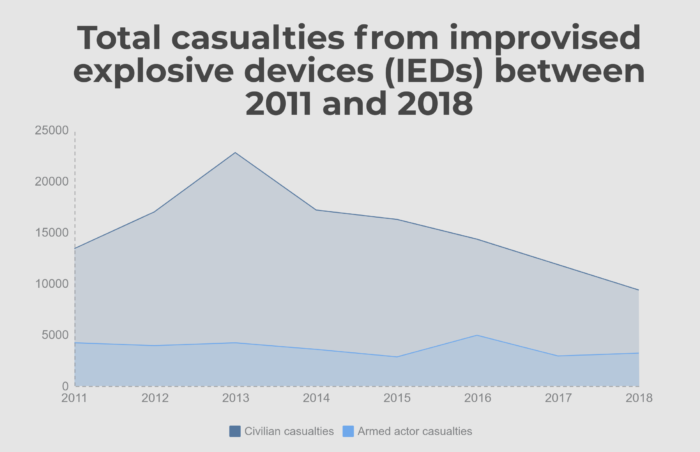 However, the number of casualties from IEDs has been on the decrease since 2013, with the number of IED incidents considerably lower in the following years. Whilst there was a significant rise in the number of IED incidents in 2018 there continued to be a decrease in casualties. This largely appears to be due to the nature of the IEDs used, with more victim-operated and roadside bombs being used as ISIS continues to carry out small-scale attacks and leave such devices behind in liberated areas.

Nevertheless, aside from 2017, IEDs have been the weapon-type responsible for the most civilian casualties from explosive violence each year since 2011 and continue to pose a substantial threat across the globe. 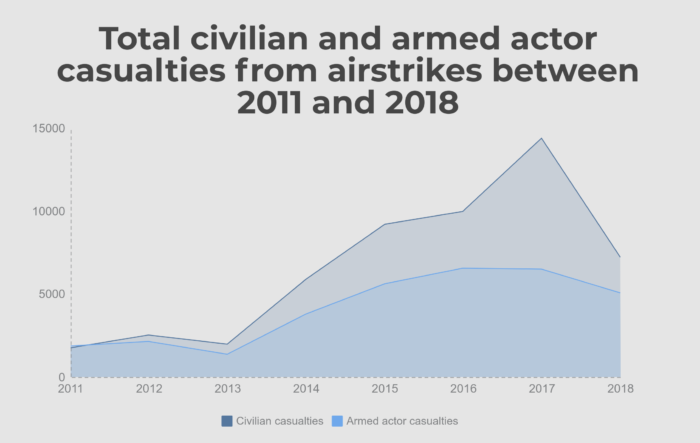 Casualties from airstrikes rose significantly over the course of the last eight years, peaking in 2017 when they caused more civilian casualties than any other weapon type, before seeing a decrease in 2018. Over the last eight years, many states have become increasingly engaged in airstrike campaigns particularly in Syria, Iraq, Gaza and Yemen, including those in the Saudi-led coalition and the US-led coalition as well as Israel, Syria and Russia. The airstrikes by these states have resulted in thousands of civilian casualties – more than can be captured by AOAV’s data.

The rise in 2014 is predominantly accounted for by the airstrikes that devastated the people of Gaza over July and August 2014 as part of Operation Protective Edge. 2015 saw the beginning of the Saudi-coalition’s campaign in Yemen as well as Russia’s use of airstrikes in Syria, though the majority of civilian casualties from Russian airstrikes occurred in Aleppo in late 2016. 2017 saw not only Syrian, Russian and Saudi airstrikes continue to devastate civilian populations, but the US-led coalition campaigns on Raqqa and Mosul also occurred. The 2018 casualties largely signify the harm from Syrian and Russian bombardment of Eastern Ghouta in Syria and the continued Saudi-coalition bombardment of Yemen. 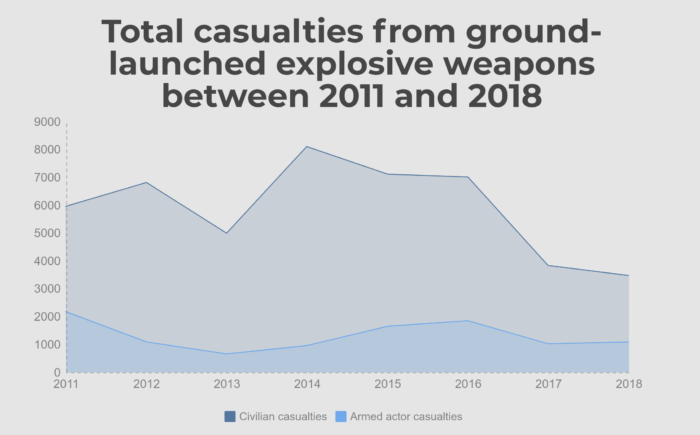 Used by both state and non-state actors, the use of ground-launched weapons has been quite consistent throughout the last eight years. However, in the last couple of years there has been a decline in casualties from their use despite higher levels of incidents. 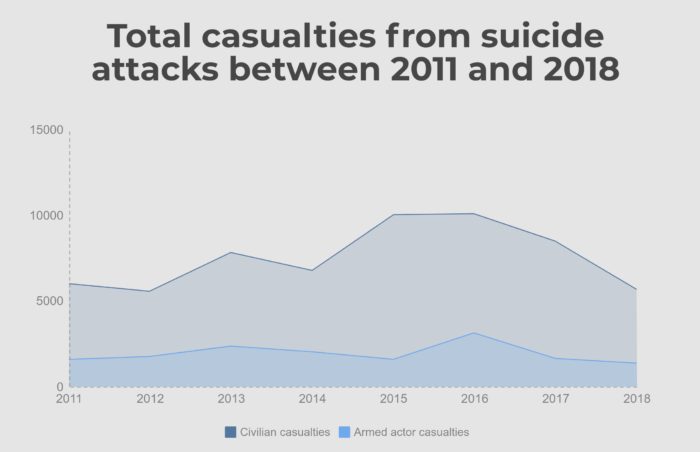 While the liberation of territories governed by ISIS has seen a decrease in large-scale suicide bombings in Syria and Iraq, we are beginning to see the rise of ISIS in other countries, where they are beginning to carry out more and larger attacks. 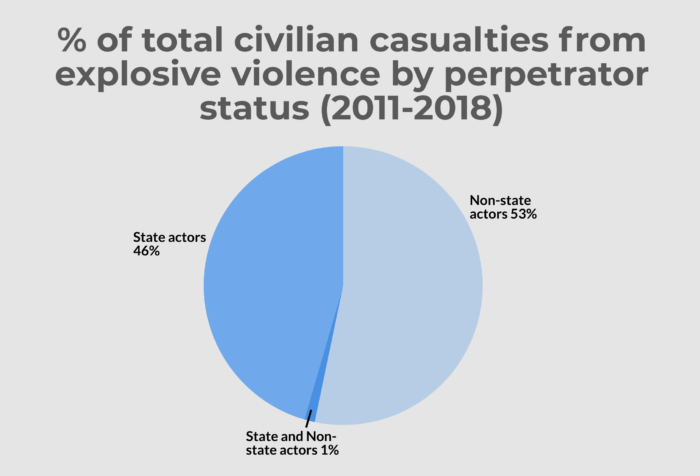 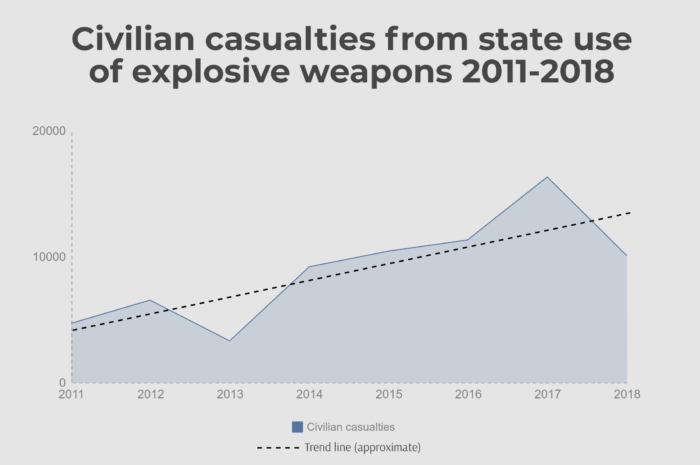 However, what is of concern is that civilian casualties from state use of explosive weapons have been on the rise in the last eight years, with more and more states engaging in conflict. Often this engagement results in high numbers of civilian casualties and there is some evidence to suggest that such engagement fuels further terrorist group activities and membership. 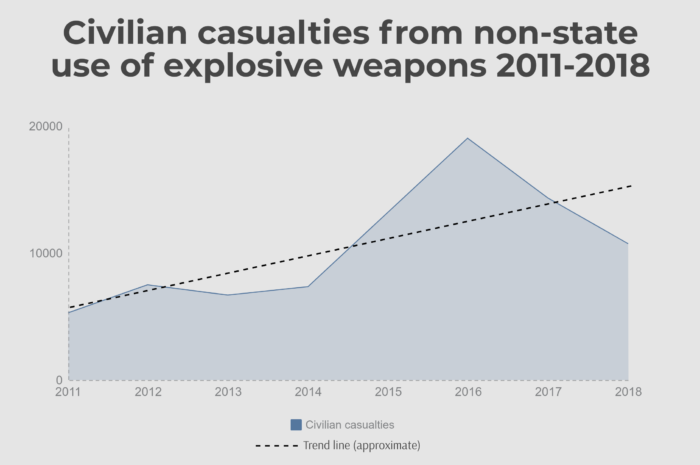 Whilst there has also been a rise in casualties in non-state use of explosive weapons this somewhat skewed due to an increase in non-state groups being identified behind IED attacks – therefore far more IED incidents have been recorded with a non-state group perpetrator, despite the specific group not being identified, rather than going recorded with an unknown perpetrator. It is now primarily ground-launched attacks where the perpetrator status goes unrecorded.

The findings over the eight-year period between 2011 and 2018, have identified some crucial trends and patterns that help not only better understand the civilian harm that results from the use of explosive weapons but also helps to prevent it. AOAV, along with other members of the International Network on Explosive Weapons (INEW), has been calling on states to develop a political agreement to stop the use of explosive weapons with wide-area effects in populated areas. It is clear from the course of AOAV monitoring over this period that this is one of the key steps that could contribute to a substantial decrease in civilian deaths and injuries from explosive weapons.

AOAV has also continued to examine IEDs and suicide bombings in particular due to the high-levels of casualties that result from these attacks. AOAV has called for states to address the proliferation of IED precursor materials and for better sharing of knowledge between states and other actors engaged in preventing and responding to IEDs.

What is undeniably clear from AOAV’s data is that it is civilians that consistently bear the harm from the use of explosive weapons. While the reverberating impact of such explosive violence means that these incidents will continue to devastate civilian populations for decades.