Explosive violence in Ukraine impacts the elderly disproportionately, as the life of Yulia Stepanovna Novikova reveals

Yulia Stepanovna Novikova sits in the early afternoon sun cradling a black and white cat. Beside her gossip two young teenage girls, and she watches them as they share their little secrets. When you first look at this scene, it is heart-warming.  Perhaps she is a grandmother. Perhaps she has loved that cat since it was a kitten.

Then her story is told.  She is 82 years old, she explains, and a refugee.  Technically, she is an internally displaced person, another victim of a war in eastern Ukraine that has caused hundreds of thousands of people to be forced from their homes, and thousands of civilians to be killed or wounded by Howitzers and mortars, grenades and Grad rockets. 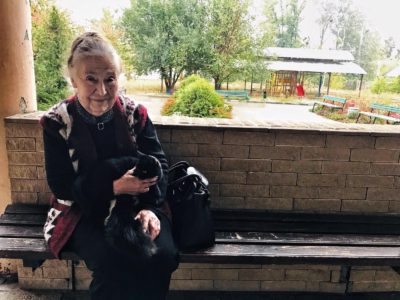 She has lived here, in a former sanitorium called Svyatie Gori for five years now. It is 100 kilometres from the frontline, and a full day’s journey to her old flat in Horlivka in the Donetsk Oblast of eastern Ukraine. She was forced to flee that city in 2014, when the Grad rockets starting falling right next to her home and staying alive overtook the priority of staying.

Before the war, her life was full.  She had many friends.  She taught physics, until recently, in a local professional college. She would leave her city in the summer months and go camping, hiking through the endless forests of Moldova, Georgia and the Carpathians. Then, on the 14th July, 2014, the bombs started falling on her hometown and her life was punctured.

“Kuzma,” she says, talking about her cat. It was a pure breed – a rare one – and she had had her for 20 years.  She was beautiful, but the sounds of the bombs broke her heart, literally.  Kuzma died of a cardiac arrest. Yulia’s breath falters when she remembers her beloved. Her son told her to pack. “Everything will be normal by the end of the year,” he said, so she put enough clothes for two months in a suitcase.  That was 1,896 days ago.

She came straight here, just with that small bag, and this is her life now. 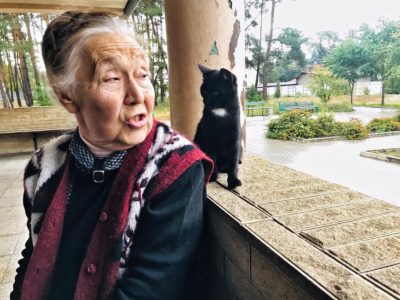 The existence she has here isn’t that bad, she says. She can go swimming in the local river. When the weather is good, she walks in the forests and finds mushrooms and berries. She has these cats to play with.  But they aren’t Kuzma, and she misses having a kitchen where she can make dinner and meet her friends.

Instead, she goes to the general canteen here and pockets some bread, and pours a little soup into a cannister, and comes and feeds the kittens.  It is a cliché to say that an old person has sparkling eyes, but Yulia does.  She wears her exile lightly. But you cannot shift from the reality that here is she is, in her eighth decade, separated from her son, her home, her friends, her life.  And yet so many pensioners have been caught up in this war that they now call it ‘the oldest war in the world’.  She is just one of 70 older people living in this community of 200 – all of them displaced.

The figures for the elderly caught up in this conflict are striking.  In a major study of over 4,500 older people in 2018, one report by HelpAge found that over one in ten of people over 60 reported being an internally displaced person.  More than half of these needed assistance devices such as canes or toilet chairs.  Almost a fifth had limited access to safe drinking water.  80% said that they had to decrease their food intake since the start of the conflict, and 40% said that they lived alone. Nine tenths of older men and women in Ukraine rely on just one source of income – and that is their pension.

In this sense Yulia is typical.  Hers is but a personal story repeated a thousand times.  And you see these ‘babushkas’ at border crossings and soup kitchens.  You see them waiting patiently in over-crowded hospital wards, and pushing their creaking bones and bicycles past bombed-out homes.

She is philosophical, at least.  She has seen such political changes in her life, she says.  “Six administrations at least…  There were the Germans.  There was communism.  The Soviets…”

When she was just a child she had been caught up in another war – so many years ago.  That one killed her brother.  She ended up in hospital for a year.  Hers was a life bracketed by explosive violence.

“There and here,” she says, “there and here.” And she laughs at the kitten dancing at her feet. 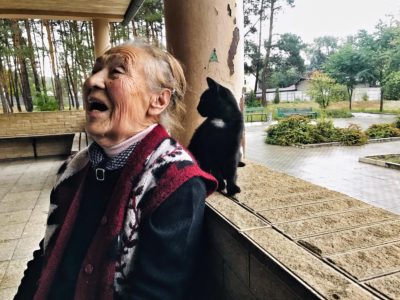