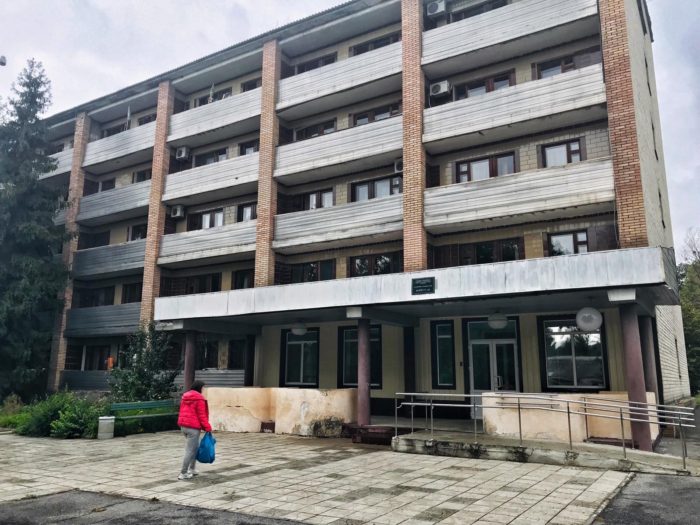 Sanitorium Sviati Hory sits around 100 kilometres from Ukraine’s frontline, surrounded by pine trees and low-slung mountains.  In better days, it was a health retreat for Ukrainian miners and factory workers.  But then the war came, and the apartments that stand here among the forest’s edge were transformed to serve a more urgent purpose: to provide space for the internally displaced communities that the explosive violence in Ukraine’s towns and cities created.

Today, the Sanitorium houses over 200 people, most of them fleeing from the separatist-controlled areas of Lugansk and Donetsk.  Many have called this place their home since July 2014, for they were forced to leave houses heavily damaged by the fighting.  Some left behind the newly-dug graves of relatives as well.

It is a quiet enclave where a casual visitor might make two observations.  The first is that the place is overrun with cats; clumsy kittens roll around in the knee-high grass that surrounds the two main building blocks.  The other is that the community is largely made up of women.

Olga Ovsyanikova, the 48-year-old who helps run this centre, is a displaced person herself. She was originally from Donetsk, where she lived in a small flat with a son, her disabled daughter and her husband.  But then the fighting forced them to flee, first to Novoazovsk and, when that was shelled, to here.  She has been here ever since, tending to her daughter who suffers from epilepsy and who needs her constant care.

“Less than ten percent of those living here are able-bodied men,” she explains.  There are some older ones who are confined to wheelchairs, but when it comes to healthy, younger men, there is an almost total absence.

Sitting around a table drinking sweet black tea with her friends Tatiana, Marina and Lena, they begin to list the men who fit that bill.  “There’s Nikulich, Afanasiev, Muhin…” they say, counting them out on one hand.  They name five out of a community of 200. Even among the children, boys are in short supply – just six of the 30 children are male. 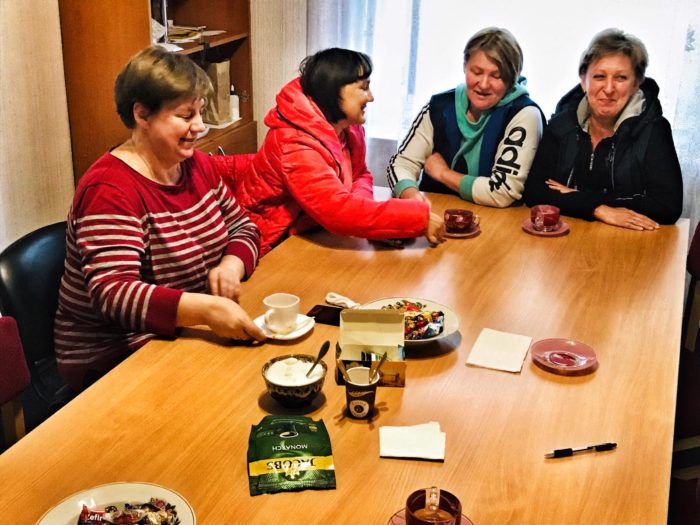 Lena is the only one whose husband is with her. Olga’s spouse works in the railroads in the Donetsk People’s Republic.  Marina’s husband lives a two-hour drive away in Avdiivka.  Tatiana is divorced.  Those with husbands only see them once a month, if that.

This lack of men has consequences.  Sometimes when they need something fixed there is no-one around to do that. “If you want a light repaired, it’s a problem,” says Olga.  They list the things that they’d like a man to do – gardening, repairing potholes, helping fix bicycles, taking their children fishing.

“There are no advantages to not having men around,” Olga asserts.  “There are many things that men can do that we cannot.”

The issue is that there is no work here.  No mines.  No factories.  So, their husbands have to go where labour is needed.

“The distance this creates has led to relationships breaking down,” she explains. “In addition, the war forced husbands and wives to take sides – supporting the Ukrainians or the Russians.  This led to divorces, too.” Her own husband she only sees once every six months.  He has become ‘untamed’ she says, a little wild.

As for those without a husband, this remote location makes it almost impossible to date.  Tatiana laughs when you ask her about the chances of finding a partner.  “There is no way to find anyone to go out with here,” she says.  And all of them tell you that they feel lonely. They miss the sense of security that having a man once gave them.  They lock their doors when they are alone in the rooms.

She does not celebrate her birthday any longer.  And when it is a special occasion, her and her husband video-chat to each other.  He buys a cake. She buys a cake. And they eat it at the same time, but alone.

The violence of the war ripped their men away from them, and forced them into this solitude. And even though it was a war waged by men against men, one of the greatest casualties of that conflict has been the way that those men that survived, have been forced far from the lives of those women that also lived on.