It is hard to find the home of Eugeniy Dubitsky.  As you drive along roads pockmarked by potholes in Mariinka, in Eastern Ukraine, you pass just some of the 1,000 apartment buildings and 12,000 private houses that have been damaged or destroyed here during the war. Half of them still reportedly remain unrepaired, and boarded-up windows in some blocs take up the best part of the building. Signs for the numbers of houses and street names are all but absent.

It was not just the buildings that were impacted. About two million people live along this, the government-controlled side of the frontline in the Donetsk region. Some 13,000 people have been killed here, a quarter of them civilians, and as many as 30,000 wounded in the war that has plagued this region since it broke out in April 2014. But one of them, Eugeniy, a heavily wounded 51-year-old, has been unable to flee the region. He still lives here, close to the war’s jagged edge. 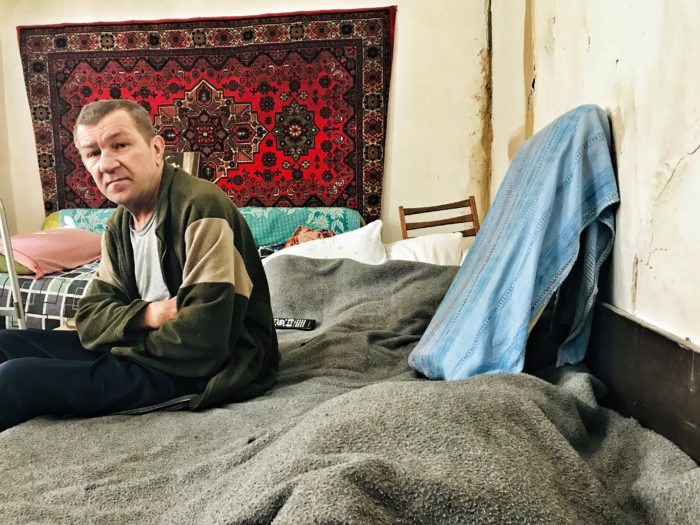 Eugeniy Dubitsky was injured by shelling in 2017 in eastern Ukraine.

His mother, Elena Ivanouha Dubitskaya, is his only carer and she directs you through the tumble-down garden out to the small cottage where her son now spends his days.  She is spritely for her 81 years, but perhaps she has no choice but to be. Her son relies on her for everything. 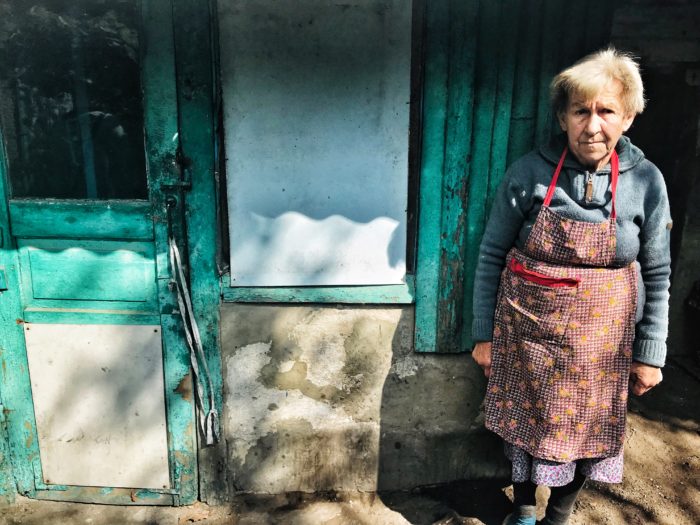 Elena Ivanouha Dubitskaya is the sole carer for her son who was injured by shelling in 2017.

Eugeniy is in the living room, perched against a pillow to help relieve pressure sores. His legs are thin under loose tracksuit bottoms, and he trembles with neurological damage. A picture behind him shows him in healthier days – he used to be a Special Forces soldier in the Soviet Union Army. Then he worked for a gas utility service and, latterly, as a coal miner. That was before everything changed on the 9th June, 2017.

On that evening, as he was preparing to take his wife out to a comedy night, and was watching television in his kitchen, an explosive shell shattered the window and his life with it. The blast knocked him down onto the floor, along with his wife who had just left the shower in a bathrobe and towel.  Blood poured out of both of them. He grabbed more towels and stemmed the flow, but it was clear the damage was extensive. Shrapnel had pierced his left thigh and gone right through his legs. His calf was in shreds. His wife was lying with both hips punctured, screaming in pain.

Eugeniy describes these events in a slow, faltering way. The shell’s impact robbed him of his voice for a while, and even now his words are broken, like those of a stroke victim.

“Ambulances refused to come help,” he said.  “It was only when my mother came that soldiers got us and carried us out into the street.”  It took hours for them to be seen by a doctor, and by then they were clinging to life.

It was not the first time that violence had descended. Their house had been hit twice before.  Neighbours had been killed.  One old-age centre had been hit, harming seven pensioners inside.  But, he said, he had nowhere else to go. His mother had been, until recently, looking after his 78-year-old father, who had been living paralysed for 18 years with a stroke. They had thought about leaving for family in Kharkiv, but then… he lets the words trail out.

He had three operations and spent two months in hospital. The ICRC gave him medicine and pain relief, and his mother brought him his meals. His wife lay nearby, in intensive care, for weeks.  Now she lives two-hour’s drive away, looked after by her daughter from another relationship. They have only seen each other once since the incident.

Today, he needs help to go to the toilet, to dress, to cook. He has gone out only twice in the last year, once to get teeth pulled by a dentist. Two friends come from time to time to visit. The rest, he sits on his couch, smoking cigarettes, doing word puzzles and watching Russian state television. 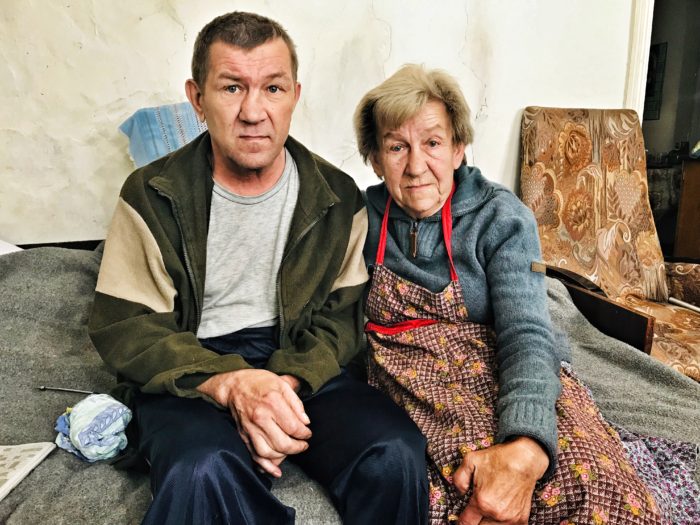 His legs shake as he talks, and he holds a floral handkerchief to his mouth to catch the saliva that spills from trembling lips.  His mother looks on.  It is not the first person that she has had to care for, she explains.  Her own mother had a stroke at 82, and lived for five more years immobilised. Then her husband had his stroke. And now her son had this.  Behind her a picture of a saint peers through a veil of lace curtain.

Despite the suffering, though, they do not complain. They have received no funds from the government to help them with their new situation.  They have had no visits from physiotherapists, and no mental health counselling either.  But this does not seem to upset them.

There is a fortitude to him and his mother that is striking. They do not dwell on the pain of the present.  Nor on the possible challenges of the future.  When you point out his mother is already old, and may not be able to look after him for much longer, he does not say anything.  She speaks out.

“A mother will never leave her child alone,” she says. And that is all that is said on the matter. 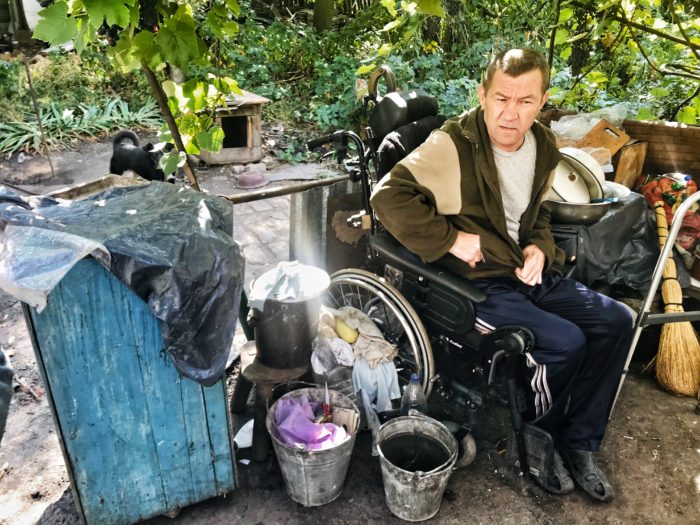 Their world is very small, yet they get by. The war has ripped into their lives, but they still live the best they can. And with that, he hauls himself from his bed and, taking painful steps using a stroller, walks through the small bungalow out into the morning sunshine.  He sits down in an electric wheelchair that lacks a working battery, and pulls out another cigarette, and smiles a thin smile.