Action on Armed Violence (AOAV) researcher, Jennifer Dathan,  has had her article, ‘Explosive weapons in Syria: the lasting harm to the environment‘, published on FAIRPLANET. 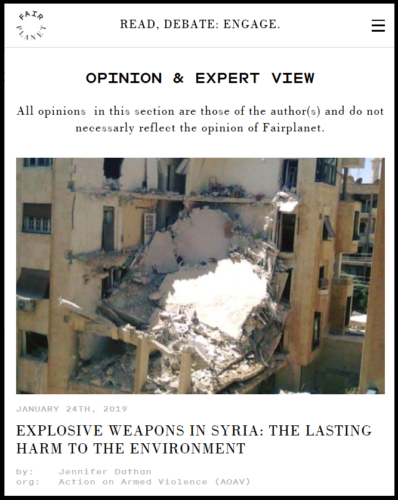 The report examines AOAV’s findings from their research on the use of explosive weapons in Syria over the course of the conflict. AOAV sought to better understand  the long-term impacts from such violence on areas such as health, the economy, the environment, and culture and society.

AOAV’s research showed severe long-term harm, particularly from the levels of contamination from explosive remnants of war (ERW) and the levels of infrastructural harm, both of which will have lasting health, economic and social consequences for the civilian population.

To read the article on FAIRPLANET, please click here.