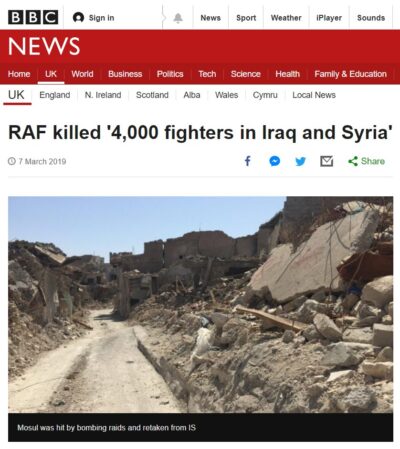 According to the data released to AOAV, the MoD claimed that RAF strikes in Iraq and Syria have killed and injured an estimated 4,315 enemies between September 2014 and January 2019.

Yet, despite such high numbers of enemy combatants claimed harmed, the UK government also claims to have killed just one civilian throughout its 54 months of engagement in Iraq and Syria.

The findings were first released in an in-depth article by the BBC: RAF killed ‘4,000 fighters in Iraq and Syria’.

Further articles citing the report came from major news outlets, including: The Telegraph, Metro, twice in The Guardian – with the second report articulating further concerns over the MoD’s claim – The Independent, The Sun, and theDaily Mail.

It was also featured on Radio 4.

In response to the findings, Amnesty International released a comment, reiterating their call for the UK to disclose detailed information about its airstrikes, thoroughly investigate allegations of civilian casualties and provide full reparation to victims of violations.

AOAV’s findings can be read here.