The latest data on the civilian harm from explosive weapons from Action on Armed Violence (AOAV) was published in The Guardian today, January 11th 2019. The article, ‘Afghanistan bucks global trend with sharp rise in civilian casualties’, can be read here. 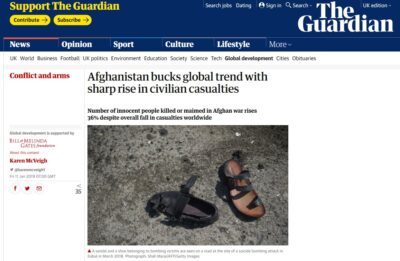 The article highlights key patterns and trends, as well as AOAV’s key findings on explosive violence in 2018.

Data is from AOAV’s Explosive Violence Monitor, which records global deaths and injuries from explosive violence, as reported in English language news sources.

Key findings from 2018 include: