The name Ukraine is derived from the word ‘borderlands’, so it is, perhaps, a sad irony that today Ukraine faces a war defined by explosive violence that has divided this country into jagged frontiers.

The health centre at the Mayorsk checkpoint in eastern Ukraine is perched on such a border – one that runs between the separatist Donetsk People’s Republic and the rest of Ukraine. The medical hut is a make-shift affair.  Comprised of MDF panelling and two small windows, it contains two beds, a desk and a small table for coffee and tea. On one side someone has put some cornflowers and mallows – Ukrainian autumnal flowers – in an old coffee mug.  It is an attempt to soften the interior, but they stand out in contrast to the neat piles of sutures and dressings that lie opposite.

Inside the hut sit two nurses, a doctor and a cleaner. They are just some of a staff of 12 that work in shifts through the year here, every day of the week, holidays and festivals included. Run by the French NGO Premiere Agence, this centre is a lifeline to those crossing the border outside. 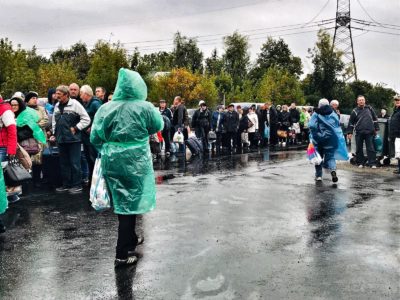 People queue at the Mayorsk border-crossing.

Through the window you can see the rain falling steadily from a slate grey sky. And beneath stand lines of women and men stretching out of view. They are trying to pass a border that, until 2014, was just open fields. Between the lines, walk men with AKS-74Us and AKMS rifles slung across their chests – Ukrainian soldiers guarding a frontline that still claims lives every week. On the door of the medical unit someone has put up a sticker: ‘No Weapons’ it states.

Dr Valeriy Dantieiev points to the queue and says that it will grow longer today. “They have lost electricity,” he says, “and so are using just a generator. That means they’ll be running less machines that can process the passport control.”  Sure enough, the queue grows as each bus arrives from the West.

One thing that stands out is just how old those outside are. Many carry walking sticks. The oldest person they had to treat here in the centre was 92.  Why so many elderly are forced to stand in the cold rain is rooted in the hard logic of bureaucracy.  In order to claim your pension, the Ukrainian government has decreed that you have to present yourself at a designated bank every 60 days.  There are no such banks in the annexed region and so here, every day, people in their 70s and 80s stand in slow-moving lines, heading to register for their pension funds. 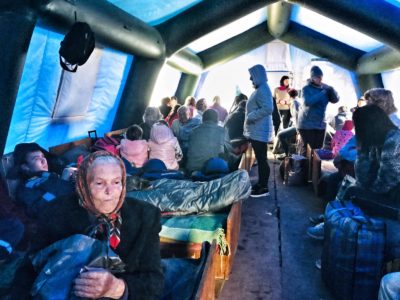 At the Mayorsk border-crossing

If you stop and ask them their ages, their answers are laced with the knowledge it is an indignity what their government asks them to do.  There is the 75-year-old carrying a heavy bag in her gnarled hand.  Another, 82, walks with a cane, her headscarf wrapped tight against the unrelenting rain. To one side sits an 81-year-old.  She used to be a paediatric doctor until two years ago and now, she says, pulling a cloak tight against her throat, she has to do this just to survive.

In the winter, it gets as cold as minus 20C here.  In the summer, the thermometer rises to over 40C.  This takes its toll. The charity ‘Right to Protect’ has recorded 35 deaths at checkpoints between January and September 2019 alone.  These are almost all pensioners, mainly men, dying from heart attacks and strokes brought on by the hostile conditions of the crossing.

As many as over 14,000 people cross one of the five checkpoints every day between Ukraine and the Donetsk separatist region and, at least until recently, such crossings lacked even the most basic facilities.  Stories abound of journeys from one side of the border to the other taking 24 hours. You even hear of delays of up to three days. This on borders that once lacked toilets, running water, shade or shelter.

Dr Dantieiev points out that the nearest decent medical facility is thirty-minutes’ drive away and that without the first aid they are able to offer, the death toll would be higher.  From reducing their patients’ blood pressure to offering emergency medicine for unexpected wasp sting allergies, hypothermia or heat-stroke, their work is cut out. In the space of half an hour, the team is mobilised twice.  Once to respond to a woman who had fainted.  Another to help reduce a man’s elevated heart rate.  These are the burden and indignities of a war crossing translated into medical conditions. 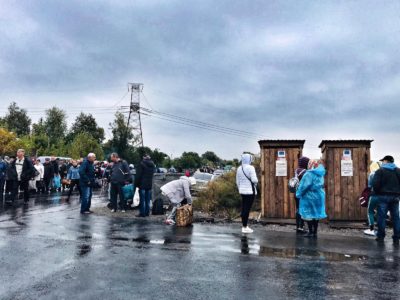 Things have improved – the borders once lacked toilets, running water, shade or shelter.

Admittedly, he concedes, things have gotten better.  There is a shop selling snacks now. On a good day, the timings are faster. There is a shelter over there, he says, pointing out a thin tarpaulin under which a line of people huddles.  Wooden toilets provide much needed relief. But these improvements have not relieved the over-riding despair.

“You see very few people rejoicing here,” says the 48-year-old Accident & Emergency medic.  It has made him angry watching these lines of people made to suffer just to draw down their pensions. “Many are being forced to do it by other relatives,” he says.

He hopes things will change, but he is not holding his breath. “That is for governments to decide,” he says, “not people like us.”

Then someone comes in and says that an old man – a 67-year-old – has collapsed outside and the doctor pulls out a vial of hand gel antiseptic and prepares himself for another victim of a war. One that may have begun with explosive violence but has now descended into a conflict defined by cold, bureaucratic oppression.