The industrial lands of the Donbas region in eastern Ukraine have always been a treasure trove for scrap metal dealers. Decaying Soviet industrial zones, hidden coal-mines and belching coke factories all provided a steady and rusty supply of metal.  Then the war came, and the air was filled with the shrill sound of Grad rockets and Howitzer shells falling on Donetsk and beyond.

For most, the visitation of the dogs of war is only a burden.  Families were ripped apart.  Lives cut short.  Minds shattered.  But for the scrap dealers of the region, there was a metal lining to that bloody cloud – millions of tonnes of scrap were created in the firestorm.  From burnt-out factories, to abandoned cars, to the detritus of war itself, the conflict produced an embarrassment of riches for the scrap dealers of the region. 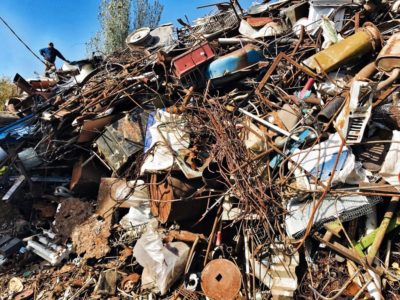 This did not go unnoticed.  As the conflict transmuted into the sort of low-level hostilities seen today, men on both sides of the border sought to profit from explosive violence’s ugly legacy.  In the so-called ‘Donetsk People’s Republic’, scrap metal dealer permissions are, today, sold for 200,000 UAH (about $8,000 USD).  Local mayors have tried to establish monopolies cleaning up the war’s rusting legacy, while petty entrepreneurs and criminals involved in the black market have further lined their pockets, with both Russia and the Black Sea providing routes for sale to the Middle East and Azerbaijan.

Internal power struggles have also played out. In October, 2016, the Luhansk People’s Republic’s fuel and energy minister, Dmitry Lyamin, was arrested and accused of allowing criminal networks to control the rebels’ strategic energy reserves.  In 2015, Ukraine’s security service, the SBU, arrested a ring of corrupt businessmen in the eastern port city of Mariupol over a multimillion-pound scam involving forged tax documents and bogus deals with Donetsk airport, which had already been totally destroyed by heavy fighting months earlier.

This profiteering from the metal remains of war is not new and happens around the world. Syria’s richest man, Rami Makhlouf, for instance, has made millions from the profits of melted-down steel cannibalised from Syria’s cities – picking clean the carcass of the towns and cities left devastated by bombs and blasts. Likewise, in eastern Ukraine, a land rich in factories and metal production, the possibilities of profiteering were so prevalent it lead to the Moscow Times calling it “one of the few growth industries in and around the destroyed Donetsk airport.”

This growth has led to profits. In the Donbas region, outside the Metalprom scrap dealership of Eugeniy Shkermenev, in Slovyansk, eastern Ukraine, sits parked a 2013 Porsche Cayenne – costing roughly $40,000 USD. It does not belong to the dealer, but to a ‘go-between’ who is quick to show you the scrap metal he has donated to local initiatives.  The cost of his car is not spoken about.

But not everyone seems rich. The scrap dealer himself, Eugeniy, looks like his life has not been elevated by the wages of war.  His is a litany of complaint.  Despite a mountain of metal overshadowing his small yard, he lists the woes of the conflict.  There was no business in 2014.  The global price of metal today is too low to make a profit.  He, like other scrap metal dealers you speak to, deny dealing in the waste that the war created.  He had people coming in, seeking to sell shell fragments and other explosive remnants of war.  This trade, he tells you, is illegal and so he did not take it from them. 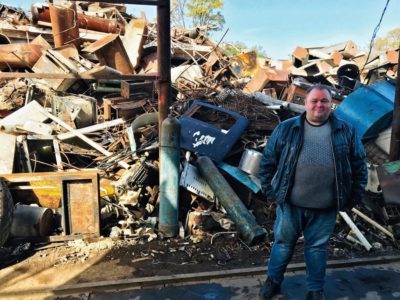 “There will always be people who will profit from war,” Eugeniy says.  “But for me it has not been like that.  My supply chains have been disrupted, and clients who used to run metallurgic factories have disappeared.”  Now he has to send his metal not to Donetsk, which lies beyond a hotly contested border, but to Dnipro and Mariupol. The first is 4 ½ hours away, as is the second. Donestk used to be half that.

Others echo the same frustration.  Clearly, people have made profits from the scrap metal of the conflict, but no-one will admit to it.  Vyacheslave Kosavenok, a 47-year-old man who runs a dealership near Kramatorsk, concedes, though, that profit is there to be made.

“A lot of state-owned factories have been shut down, so we have seen a spike in metal from failed businesses,” he says. “On top of that you have people leaving their homes, people desperate to make a living, the destruction from the fighting.”  All of these have impacted the economic dynamics of his trade.

The trade in scrap metal in eastern Ukraine is, clearly, booming and, for some, highly lucrative.  Scrap metal exports between January and March 2018 were six times the levels of 2017, at some 140,000 tonnes. Moldova (76 percent) and Turkey (23 percent) took the lion’s share of these recorded exports. And so, while local dealers are quick to distance themselves from suggestions that the war might have brought some benefits to their trade, some are making fortunes off the back of the region’s misery.  For this is war, and war always, somehow, somewhere, profits someone.