In April 2019, Action on Armed Violence (AOAV) recorded 2,326 deaths and injuries from 234 incidents of explosive violence around the world, as reported in English-language media. Civilians accounted for 78% (1,814) of the deaths and injuries recorded.

When explosive violence was used in populated areas, 93% of all casualties were civilians, compared to 24% in other areas.

At least one death or injury from explosive violence was recorded in 23 countries and territories last month. The five worst impacted countries were Sri Lanka, Syria, Afghanistan, Pakistan and Libya in terms of civilian casualties.

Sri Lanka was the country worst-impacted by explosive weapons last month. All casualties recorded in Sri Lanka are due to the suicide attacks that took place across the country targeting places of worship and hotels on Easter Sunday. In total over 250 were killed and over 500 injured. In 2019, prior to the attacks in Sri Lanka, AOAV recorded 1,227 deaths and injuries from 42 suicide bombings globally across 16 countries. Of the casualties recorded, 59% (721) were civilians. In 2018, AOAV recorded 218 attacks which involved suicide bombings across 21 countries. The attacks left 7,000 casualties, including 5,644 civilians.

Syria was the second-worst impacted country by explosive weapons in April; with 523 civilian casualties from such violence last month. 63% of civilian casualties were caused by ground-launched weapons, 21% by IEDs, 5% by airstrikes, and the remainder from incidents involving multiple weapon types, landmines, or naval-launched explosive weapons. In one incident, on April 7th 2019, at least 11 civilians were killed and 40 others injured in rocket shelling by the regime and Iran-backed militias on areas in Idlib province, Syria.

Similarly, in Pakistan, 89% of civilian casualties were caused by IEDs, whilst the remaining 11% were caused by Indian shelling on Pakistan-occupied Kashmir. One incident, on April 12th 2019, saw a suicide bomb detonated in an open-air market in the Pakistani city of Quetta, killing 20 and wounding 48. 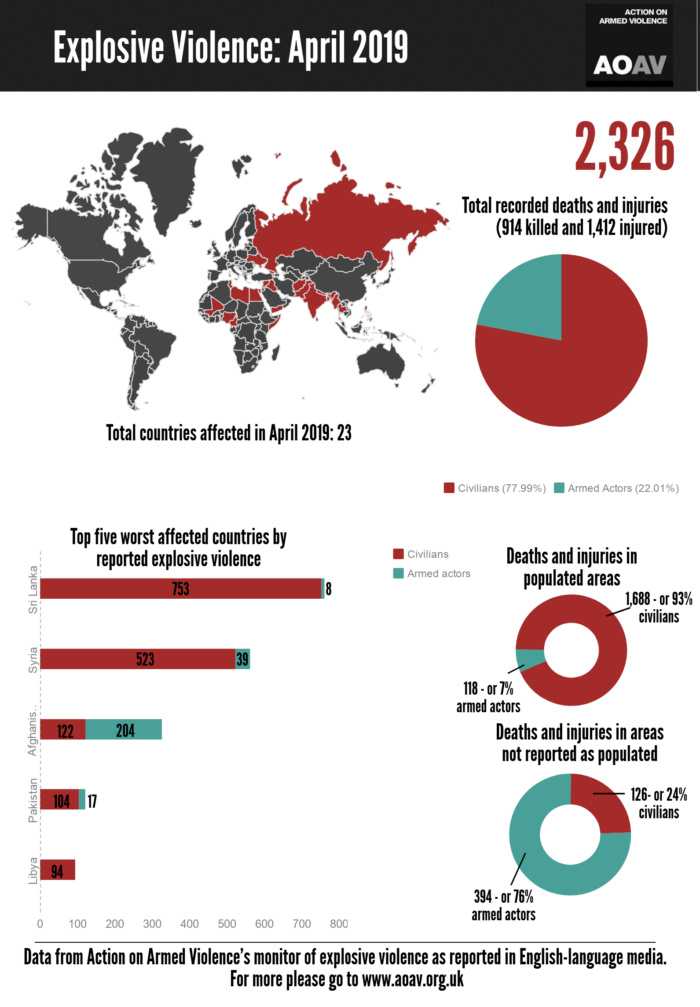