In August 2019, Action on Armed Violence (AOAV) recorded 3,147 deaths and injuries from 342 incidents of explosive violence around the world, as reported in English-language media. Civilians accounted for 64% (2,029) of the deaths and injuries recorded.

When explosive violence was used in populated areas, 87% of all casualties were civilians, compared to 17% in other areas.

At least one death or injury from explosive violence was recorded in 24 countries and territories last month. The five worst impacted countries were Afghanistan, Syria, Yemen, Libya and Pakistan in terms of civilian casualties.

92% of civilian casualties in Afghanistan were caused by IEDs – 56% were from suicide attacks alone. On August 7th 2019, a suicide car bomb in Kabul killed at least 14 and injured 145. Ten days later, on August 17th 2019, a suicide bomber targeted a wedding in Kabul. The bombing left over 240 dead and wounded.

Almost four in every five civilian casualties (or 79%) from explosive violence in Syria last month, were caused by airstrikes. 10% were caused by ground-launched weapons and 11% were from IED blasts.

Similar to Syria, in Yemen 70% of civilian casualties from explosive violence were caused by airstrikes; 14% were from ground-launched weapons and 16% from IEDs. 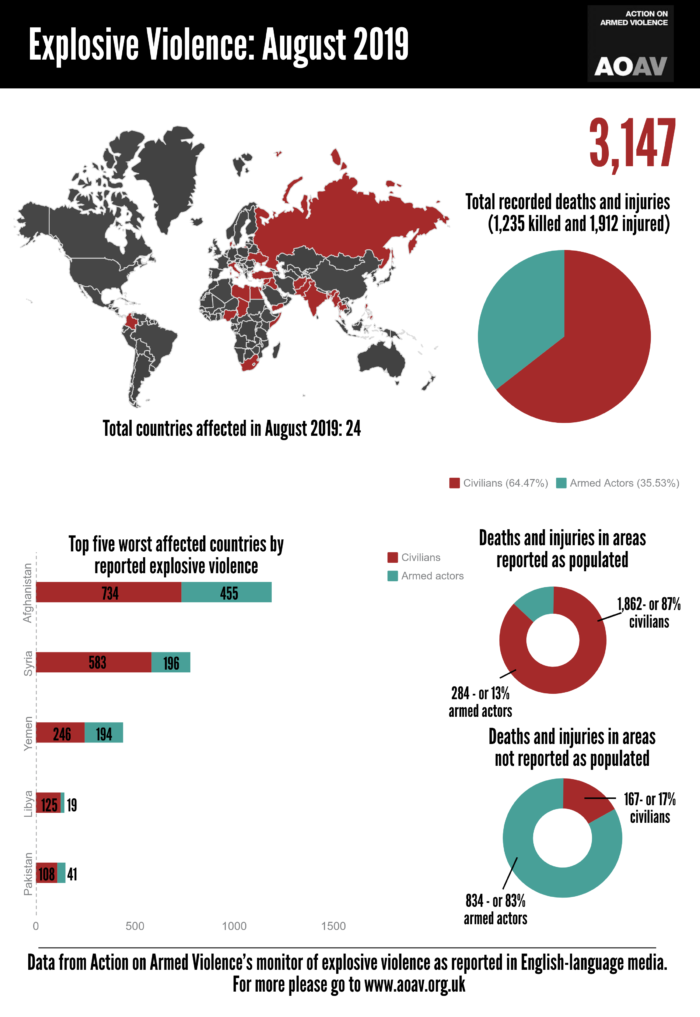