In June 2019, Action on Armed Violence (AOAV) recorded 2,224 deaths and injuries from 338 incidents of explosive violence around the world, as reported in English-language media. Civilians accounted for 65% (1,437) of the deaths and injuries recorded.

When explosive violence was used in populated areas, 90% of all casualties were civilians, compared to 11% in other areas.

At least one death or injury from explosive violence was recorded in 24 countries and territories last month. The five worst impacted countries were Syria, Afghanistan, Iraq, Nigeria and Yemen in terms of civilian casualties.

On June 10th 2019, airstrikes launched by Syrian President Assad’s regime and its ally Russia killed 27 civilians, including 11 children, in Idlib, northwestern Syria, and injured more than 70. 71% of all civilian casualties recorded in Syria in June occurred in Idlib.

Afghanistan, on the other hand, saw IEDs cause the most civilian casualties from explosive violence (82%), with a further 11% from ground-launched explosives and 7% from airstrikes. In total, AOAV recorded 176 civilian deaths and injuries in Afghanistan.

In Yemen, AOAV recorded 108 casualties from explosive weapons in June. Of these, 61 were civilians; 24 were due to Saudi-led coalition airstrikes, while 29 were due to Houthi shelling (24) and mines (9). Further civilian casualties were recorded that resulted from ground-launched weapons; seven from Saudi-backed militia shelling and one child was killed in a grenade incident in Aden by an unknown perpetrator. 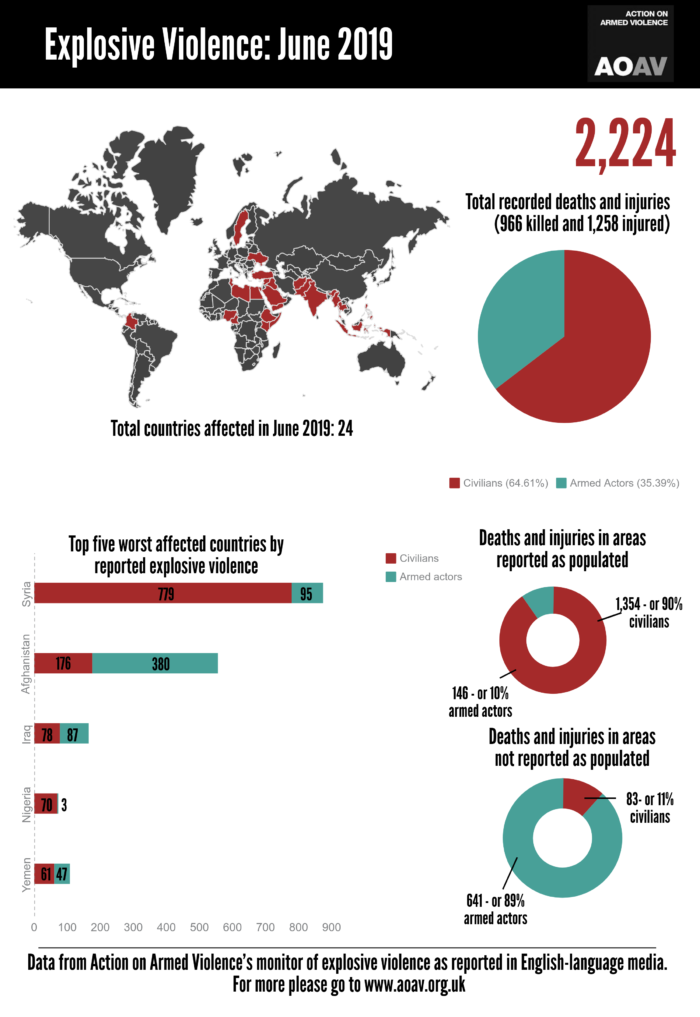