In May 2019, Action on Armed Violence (AOAV) recorded 2,348 deaths and injuries from 415 incidents of explosive violence around the world, as reported in English-language media. Civilians accounted for 64% (1,499) of the deaths and injuries recorded.

When explosive violence was used in populated areas, 85% of all casualties were civilians, compared to 16% in other areas.

At least one death or injury from explosive violence was recorded in 27 countries and territories last month. The five worst impacted countries were Syria, Afghanistan, Yemen, Pakistan and Iraq in terms of civilian casualties.

In total, 65% of civilian casualties from explosive weapons in Syria were caused by airstrikes; 4% were from IEDs, 18% from ground-launched weapons, and 1% from mines. A further 12% were caused by incidents using both airstrikes and ground shelling. On May 27th 2019, airstrikes and missile attacks across Idlib province in Syria killed at least 17 civilians and injured a further 47. Among those killed were at least five children.

Afghanistan, on the other hand, saw IEDs cause the most civilian casualties from explosive violence (68%), with a further 13% from ground-launched explosives and 19% from airstrikes. In total, AOAV recorded 340 civilian deaths and injuries in Afghanistan, representing 40% of the total killed and injured by explosive weapons in Afghanistan (847).

Yemen too continued to see casualties from explosive violence. Of the 98 civilians killed and injured in Yemen, 70 were from airstrikes, 10 from ground-launched weapons, 14 from IEDs, and 4 from landmines. One airstrike, on May 16th 2019, saw at least six civilians killed and up to 60 injured by the Saudi-led coalition bombardment of Yemen’s Houthi-held capital Sanaa. 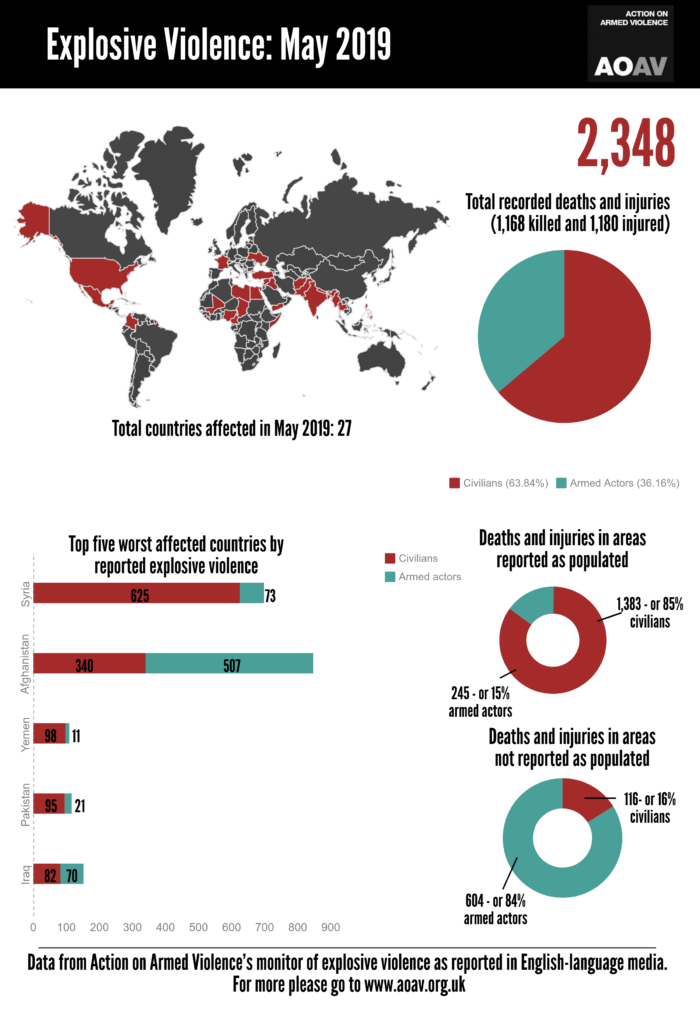