In September 2019, Action on Armed Violence (AOAV) recorded 2,336 deaths and injuries from 304 incidents of explosive violence around the world, as reported in English-language media. Civilians accounted for 66% (1,553) of the deaths and injuries recorded.

When explosive violence was used in populated areas, 93% of all casualties were civilians, compared to 11% in other areas.

At least one death or injury from explosive violence was recorded in 22 countries and territories last month. The five worst impacted countries were Afghanistan, Yemen, Syria, Somalia and Libya in terms of civilian casualties.

AOAV recorded six high civilian casualty incidents (more than 40 dead and injured) of explosive violence by the Taliban. Five were suicide attacks and one was a mortar shelling. The worst of these incidents occurred on September 2nd 2019, when a suicide car bomb hit a residential area near Green Village, a large compound housing aid agencies and international organisations, in central Kabul. The attack left at least 135 civilians dead and injured.

AOAV also recorded two US airstrikes which resulted in high levels of civilian casualties. Including one on September 18th 2019, when a US drone strike hit farmers and labourers who had just finished collecting pine nuts in Wazir Tangi in Nangarhar province. In total, the airstrike left at least 70 civilians killed and injured. 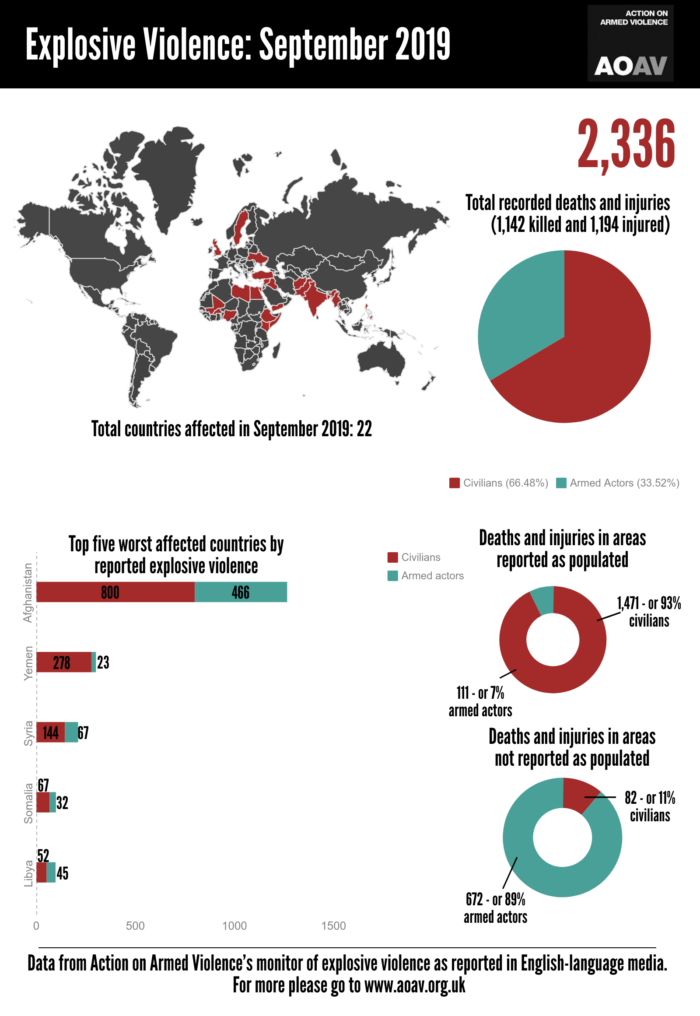