At the beginning of World War II, a government pamphlet was issue that resulted in a massive cull of British pets. After the first bombings on London in September 1940, pet owners rushed to have their pets put to sleep. There were many reasons why pet-owners took this tragic and drastic step. Some thought it would save their pets from suffering through the bombardments; others had already lost their homes and couldn’t relocate with their pets; others could not stretch their small rations to cover the needs of their pets too. At least 750,000 animals were killed in the space of a week.

Such a cull, however, arguably caused more harm than good. Pets are known significantly to help in human recovery from disasters and wars. A recent study published in ‘Frontiers in Veterinary Science’ analysed the ‘Effect of Pets on Human Behaviour and Stress in Disaster’.  While the study looked at the impact of pets on PTSD after an earthquake, the results are thought to be relevant to disaster victims in general. The study found the PTSD scores of pet-owners were higher than those of non-pet owners immediately after disaster but, in the years following the disaster they were lower – indicating their importance in recovery. These initial PTSD scores could also be linked to the possibility that that pet-owners may be less likely to evacuate if pets were not included in evacuation measures. Other studies have also found that pets contribute to human resilience following disaster, particularly for those from vulnerable groups. 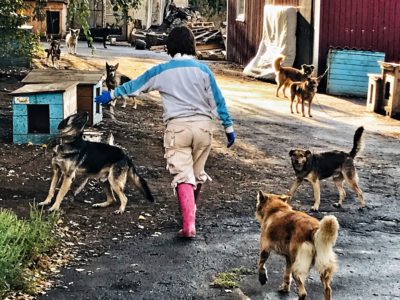 If pets are not incorporated into evacuation plans or other security measures, people are likely to take risks to remain with, or protect, their pets. And, if animals are lost in disaster, recovery can be slower and can increase psychological trauma.

Despite the connection humans have with these animals, explosive violence forces both humans and animals into danger and impacts their lives in a multitude of ways. When humans are killed, injured, displaced, or otherwise impacted by explosive weapons, pets also suffer. Many animals are often left behind and uncared for, leading to starvation or illness, in an area where they remain at risk from the continued bombardment.

The Cat Man of Aleppo
In Syria, for example, many have heard of the renowned Cat Man of Aleppo, who has risked his life to rescue and care for the pets left behind in Aleppo and Idlib. With the help of donations and assistance, Mohammad Alaa Aljaleel has set up a sanctuary in rural Aleppo, with 200 cats in residence, as well as other animals rescued from the fallout of the bombs.

His previous sanctuary in Aleppo, where Alaa was caring for 170 cats and a dog was bombed shortly before eastern Aleppo was captured by government forces in December 2016. After the capture of eastern Aleppo, Alaa, along with many others, fled. He went to western Aleppo with the 22 cats that remained. After setting up the new sanctuary there, he continued to rescue and care for the animals. During the bombardment of Idlib in 2019, Alaa managed to rescue about 80 stray cats from Kafrnabel, 40 from Maaret al-Nouman and more than 100 from Khan Sheikhoun.

Another animal shelter, Ernesto’s Sanctuary, has seen ‘too many animals to count’ hurt by the bombardment in Syria, many having been left with shrapnel wounds. Other animals, in fear, have been injured trying to escape the spreading war. When AOAV spoke to Alessandra Abidin, co-founder of Ernesto’s Sanctuary, she said the shelter had just treated a horse injured in this flight. Smaller animals are often left with crush injuries from being trapped under rubble.

There are long-term impacts on animals beyond death and injury. ‘They become nervous and agitated whenever the airplanes fly over,’ the shelter told us. ‘Now, airplanes in the sky are a regular occurrence.  They remain on edge. We have had cases of cats dying from shock and fear – not just from bomb injuries.’

Like humans, the consequences for animals from the use of explosive weapons are complex and lasting. ‘Animals are a forgotten statistic in this war. So many are abandoned, so many are left behind when people flee from the advancing war,’ the shelter told us.

Ukraine
In Ukraine’s Donbas, the situation is similar. As the violence escalated, forcing residents to flee, the population of street dogs soared. One animal shelter saw the number of dogs rise to 800 by 2016. They took in dogs abandoned as their owners fled or were killed and were quickly operating at capacity. Some of the animals had been harmed in the bombardment, with shrapnel wounds and other injuries.

Prior to the conflict, Ukraine already had high-levels of animal cruelty, but there had been a steps towards better animal welfare. This, however, was stifled by the onset of the conflict in Donbas, Kateryna Havrish, who runs an animal shelter in Stakhanov, told AOAV.

Havrish explained that, while in Stakhanov, a city in Luhansk Oblast, the situation for animals had been beginning to improve prior to the conflict, with most neutered and vaccinated against rabies, the situation quickly changed: “There were lines in vet clinics to put unwanted animals to sleep. When the shelling began, people fled, leaving dogs and cats closed in apartments without water and food.”[1]

Similar to WWII England, many animals were euthanised but far more were just abandoned – most of those euthanised occurred just prior to the conflict, but once active hostilities began it was far more common to abandon the animals. Not only did the animals have to contend with avoiding shelling and finding food, as people fled and soldier presence increased, dog shelters were targeted by soldiers where they abused and killed the animals. Havrish claimed this occurred in Luhansk and Almaznaya. In Almaznaya, Havrish told AOAV, the owner was also tortured and the animals eaten. The shelter closed.

Larisa Tsybulnik, who tried to care for the dogs left behind in Maryinka and runs an animal shelter in town, estimated about half of the dogs there had died by early 2017. They are likely to many causes of this; injuries, starvation, exposure. And, as in Syria, while some animals suffered directly from the shelling, others died from fear-induced heart attacks. 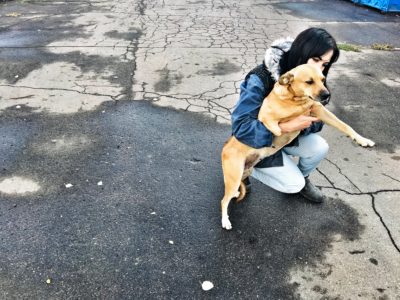 A woman at an animal shelter in Ukraine pets a dog who lost his leg in the conflict.

When animals were rescued from the conflict, some dogs were reported to find it difficult to return to peaceful life after the stress endured through the bombardment, while others, particularly those abandoned, find it difficult to trust humans again.[2] AOAV’s Executive Director was nipped three times by dogs as he visited one shelter in Ukraine, the dogs being deeply fearful of men. Though much of this response may ‘depend on the nature of the animal’, as one shelter owner described, it is clear that conflict makes animals wary of people who might fit the gender and age profile of combatants.

There are, of course, exceptions. AOAV heard of stories of people who did not flee an incoming bombardment so that they could remain with their animals, hiding with their animals in basements during the bombing, while others took on additional abandoned animals. Some were said to have died during bombardments, trying to rescue and protect animals from shelling.[3]

The harm to animals in Donbas has had impacts reaching beyond the territory. Though Ukraine has had a long problem with feral street animals, the explosive violence in Donbas has exacerbated this, and not just in the region. In one shelter in the Ukrainian capital Kiev, which holds over 1,300 animals, it is estimated that about 15% have come all the way from the frontlines in Donetsk, over 600km away.

Havrish, who now lives in Kiev, continues to volunteer at an animal shelter in Stakhanov. Her hope for the animals in Donbas is to bring them to Kiev, and then for them to be adopted abroad in countries with working laws on animal welfare. Such hopes, however, will be only for the few. When AOAV met Marina Shazhko from the Bakhmut Community for Animal Protection – or LADA – she explained it is hard to get animals placed with a family, especially mongrels. She continues to run the shelter for over 100 dogs on a shoestring budget. Shelters, both in Kyiv and Donbas are also often under threat from armed men, in a country where weapons have proliferated in the violence. Many dogs, particularly, have been killed by this further violence when shelters are attacked.

Afghanistan
In Afghanistan the situation is slightly different, given the complexity and variety of violence. Street dogs and feral cats are a common sight, and while this presence has increased in the last decade or so, it would be too much to say this rise is entirely linked to the use of explosive violence.

Dan Tatsch, a US Board member for Nowzad, a Kabul-based charity that provides shelter and care for a variety of animals caught up in the violence of Afghanistan, said that, with so many animals in need of care, it was impossible to distinguish between those harmed by different types of violence. ‘An injured animal might come to our attention several days or weeks after a bomb blast, but unless we extract shrapnel from the animal during surgery, it’s very difficult for us to distinguish, after the fact, between a bomb-blast injury and a car-strike injury.’[4] And while Nowzad has on occasion taken custody of litters of puppies whose mother was killed in a bomb blast, most animals seen at their centre appear to be the victims of what Tatsch calls ‘urban violence’ – abuse by humans or being hit by cars.

City officials in Kabul have commented in the past that they have tried to address the issue of stray animals in the Afghan capital, but given the numbers, and the fact that the capital is still struggling to recover from years of war and deprivation, strays were not a priority.

Nowzad was set up by a Royal Marine to assist the vulnerable dogs in Afghanistan and many dogs have since been resettled in the UK. However, it is worth remembering it is not just animals on the streets of Afghanistan that can suffer due to the consequences of explosive violence.

In late 2018, it was reported in a Freedom of Information request that more than 1,000 dogs working for the Army had been put down between 2002 and 2017. These dogs had worked alongside the army as bomb-sniffer dogs, or had assisted in tracking down insurgents, but they were considered ‘old and worn out’. In reality, this meant that they were over the age of eight or unable to carry out their duties to the requisite military standard.

The interdependent nature of relationships between humans and pets, often leaves both animals and people vulnerable when explosive violence separates them. Yet, it is difficult for those displaced to find shelter if they have an animal, forcing civilians in many situations to abandon or kill their pets. The domesticated animals abandoned are often left at considerable risk, from both explosive violence and the elements. Psychologically though, there are many benefits to ensuring civilians and their pets remain unseparated throughout conflict. For example, animal companionship aids those suffering from conflict-related psychological disorders, such as PTSD.

Soldier suicide increased in Ukraine throughout the conflict, as did the levels of stray dogs. However, some soldiers began ‘adopting’ these animals on the frontlines. Noticing the impact this had on soldiers, mental health organisations there began programmes with dogs acting as companion animals in an effort to help soldiers returning to civilian life.