As part of AOAV’s examination of the reverberating impacts from the use of explosive weapons in Syria, AOAV interviewed Mohamad, a Syrian refugee and his family in Gaziantep, Turkey, in October 2018. 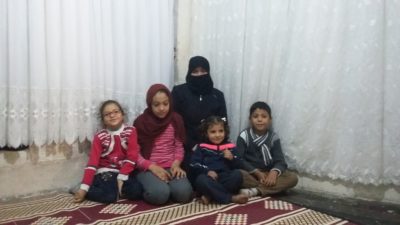 Mohamad (right) with his mother (centre) and siblings in the room they share.

In Gaziantep, AOAV met with Mohamad at an education centre. Mohamad is eight years old. He works in the same place as his uncle, in a tailoring shop in Gaziantep. He irons clothes and helps his uncle make deliveries. At the moment Mohamad works when he doesn’t have school but prior to beginning at a local education centre, he went every day. He has been employed there over a year. He works to earn money for his family as his father was killed in an airstrike in Syria and he is now the oldest male in his family. His family share a home with 15 other people, where his mother and four children share one room – a typical arrangement for Syrian refugee families across Turkey. When AOAV met with Mohamad, it was said by his teachers that he was at least a year behind in his education.

AOAV met with Mohamad’s mother at her home in one of the poorest neighbourhoods in Gaziantep:

(Mohamad, his three siblings, his grandmother, his aunty and two of her children were also present at the interview.)

When did you come to Turkey?

It was difficult to get to Turkey with all the children and their grandmother. The terrain was very difficult with many hills and we had to walk all the way from Al-Bab.

What violence did you see in Syria?

We saw a lot of violence in Syria – many airstrikes. The children’s father died in an airstrike in Aleppo in 2013. We don’t know what has happened to our home. When we left it was still standing but there has been more violence since then.

Were any of your family impacted psychologically?

Mohamad witnessed his father’s death. Fortunately, he was the only child to see it. After this though he lost his speech and he couldn’t talk for about four years. He also continued to wet the bed during this time but he is OK now.

The death of their father also had an impact on the other children, particularly the older ones. They were very fearful – even when we came to Turkey they were still very afraid. If they heard loud noises or planes they would become very afraid.

Sunna became very nervous after her father’s death and would get very angry quickly. This was then worsened in al-Bab.

What happened in Al-Bab?

When we were in Al-Bab it came under ISIS control. They took control and they were killing many people. Sunna and Ali, Mohamad’s brother, were kept by ISIS for 8 months. They used to tell them about their version of Islam in the mosque and tried to make them how ISIS wanted them to be.

To us the regime and ISIS were the same – they both used the same explosions and fear. The regime attacked civilians rather than ISIS. In the ISIS area we felt as if we were safe from the regime’s bombs.

In al-Bab there was a square where they used to carry out the executions about every three days and we would have to witness it. They used this to make you afraid so you would obey them. This is similar to how the regime was before the war – they used fear and regime agents to make you obey.

And, how were Ali and Sunna affected by the lessons ISIS taught them?

At the time it affected them a lot. They started to have no mercy and had a lot of hate for the people around them. But they are OK now.

Are they able to attend school now?

Yes, they attend school now. My eldest daughter missed a long time off school but the smaller ones did not miss much time. They all go to school now but I need Mohamad to work so we can get by. Mohamad still goes to school though. He attends Rainbow in the mornings and then a Turkish school in the afternoons. When he doesn’t have school he works, such as at the weekends.

In Turkey we feel safe but we still face many challenges, particularly over money. In Syria we had a home with two floors, there were three rooms on each floor as well as a kitchen and bathrooms. My husband did tiling and ironing and it brought in a good income. We don’t have this here – we all share this room and we have aid from the Red Crescent but it is not much to get by on. Mohamad has to work so we can have food.

Do you think you will ever return to Syria?

I would like to go back but we can only return if it is safe for my family so Assad will have to be gone – until then it will not be safe to return.

To read AOAV’s full report on the reverberating impacts from explosive violence in Syria, the key findings, the main sections, or related articles, further interviews and videos, please see here.