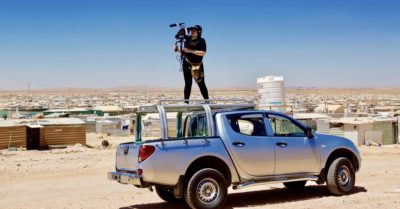 As part of AOAV’s examination of the reverberating impacts from the use of explosive weapons in Syria, AOAV interviewed Mira Hamour, the Syrian-Canadian documentary filmmaker behind Syria’s Tent Cities, in October 2018.

How much does education feature in the life of the children you met when making ‘Syria’s Tent Cities’?

Education is a way out for many of these children. I met a 5-year-old child who had grown up in a gated refugee camp. For her, war, uncertainty and anxiety was all she had known of the world and this is happening to hundreds of thousands of children.

Education is not compulsory or prioritised in refugee camps so many of the children are actually working instead, as parents see this as the only way to make ends meet. No one is enforcing that the kids need to be in school. And, from speaking to the parents, they didn’t want to pull their children from education but they felt they had to.

What type of work were these children doing?

They were doing a variety of different types of work, but they were often dangerous or unhealthy. In downtown Lebanon, for example, there would be girls younger than seven selling flowers to drunk men. This was often late at night and this left the girls at huge risk from these men. Children were also selling gum at traffic lights or doing the jobs of adults in factories.

Some families were also marrying off daughters to alleviate financial burden – many families see the harm but feel they have no option. In general, they were more likely to send boys to school.

What impact is this having on these children?

Secondary school enrolment was even lower as they had completely given up hope.

In this respect, was there a difference between the children you met who weren’t in education and those who were?

The children that could access education did have hopes and ambition. And, what stood out was that when I asked these children what they would like to be when they were older, most wanted to be teachers. They see teachers as having provided that opportunity to escape from their usual lives.

But even where children were able to access education in camps, it was underfunded and overlooked.

What did you find to be some of the main challenges to providing education?

Residency and labour were at the heart of the issue for education. Families needed their children to earn and additionally, families can’t afford the extra costs associated with education such as transportation and learning resources. This is why many children have to instead find employment. 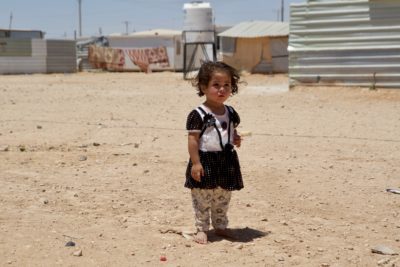 HHowever, it goes beyond economic reasons too. Many Syrian refugees also reported bullying in school and many end up dropping out. Importantly, people need to be aware that Syria is not an option for return for many of these refugees. Unfortunately, neighbouring host countries aren’t equipped and don’t have the resources to prepare schools for refugee children. This leads to a lack of necessary efforts to ensure these children receive an education and can hope for a brighter future. There needs to be more funding and support to enable this to happen. A lot of the countries that do have many of the necessary resources to help have unfortunately not taken in as many refugees as expected, and this adds pressure on the already struggling and overpopulated neighbouring countries.

Is any support provided?

There are some organisations that assist with psychosocial support in the Middle East, though they are often underfunded. One in particular that I had the pleasure of working with during filming is Nowell’s Mission, founded by Lebanese-Australian Nowell Sukkar who fundraises for many Syrian Refugee needs, including education. Nowell’s Mission operates out of both Jordan and Lebanon. I also met Nimat Bizri, who founded and operates five schools in Lebanon that cater specifically to Syrian refugees. Although this sometimes entails running a later shift for the refugees in the same school building where the local children attend in the morning, it makes a really big difference.

Children with disabilities are extremely disadvantaged. Disabled Syrian refugee children are seen as an additional challenge, so it was very rare to see them in schools.

While filming in Canada, I worked with the founder of H.appi Camp, Mazen El-Baba, which is a free summer camp for newcomer refugee children in Ontario. Mazen ensures that H.appi provides the children with the resources they need to learn English and integrate into Canadian society. He is also a young medical student and works to address and overcome any psychological damage the children might have as a result of the war. There are many more resources available to refugees in Canada than in the Middle East. 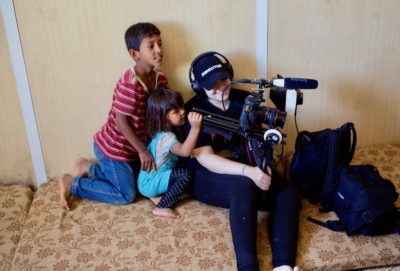 To read AOAV’s full report on the reverberating impacts from explosive violence in Syria, the key findings, the main sections, or related articles, further interviews and videos, please see here.