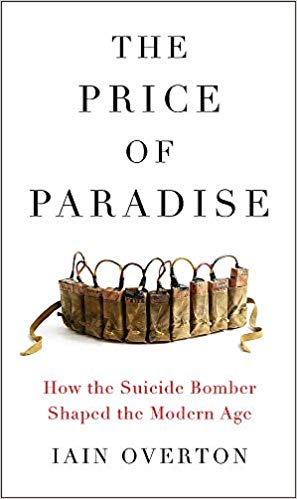 Iain Overton, Executive Director of Action on Armed Violence, will speak about his new book:

The Price of Paradise: how the suicide bomber shaped the modern world

Certainly, we live in the age of the suicide bomber. The suicide bomb itself takes more lives than any other type of explosive weapon. Moreover, in the last 5 years more people have been killed by suicide attacks than at any other time in history. How has this descent deep into the heart of terror escalated in such a way? What drives people to blow themselves up and what are the consequences? More importantly perhaps, what can be done to combat the rising spread of this form of violence?

In this book, Overton addresses the fundamental drivers of modern day suicide attacks, showing how the suicide bomber has played a pivotal role in the evolution of some of the most defining forces of the modern age – from Communism and the Cold War, to the modern day War on Terror. Interviewing Russian anarchists, Japanese kamikazes, Hezbollah militants, survivors of suicide bombings and countless other sources of valuable information, while travelling to places such as Iran, Iraq and Pakistan, Overton skillfully combines historical narrative, travelogue, interviews and testimonies, and brings his research alive thanks to potent facts and visceral storytelling.

The book can also be purchased here.

For more information and to the event, please RSVP to Nigel Ellway at ellwaynb@parliament.uk