The head of the department of environment and natural resources in the Donetsk region of eastern Ukraine used to have five national parks under his dominion. Meotida, Kramatorska steppe, Kleban byk, Kamyani Mohyly and Kramatorskiy. In total, almost 250 people worked for him in these parks; hundreds of thousands of visitors came every year.

In the east, the pride of his department was Kamyani Mohyly. It was famed for its granite rock formations, covered in rare lichen and moss species.  There lay ancient burial sites where rocks had been carved into the outline of squat humans – stone guardians of this land. Ukrainian myth told of god-like figures who made love on those stone hilltops, a passion so intense it caused the ‘Rus’ tribes to drop their weapons in wonder. Now, books published by the government about these national parks describe how men with ‘Slavonic blood’ died defending these lands from Mongol invaders.  One hunched rock is even called a ‘mourning widow’.

In these books, Ukrainian nationalism is projected onto ancient stone and steppe. These are lands depicted as filled with flowers – grassy periwinkle and three-colour violets, black thorn and pheasant’s eye. And beneath this canopy lay field mice and jerboas, while above hovered black kites and tawny eagles, seeking their prey.

But then another predator came. War and those with conflict in their hearts descended on these lands. Since 2014, more than 10,000 people have been killed in the fighting in this region. An estimated 1.6 million more have been displaced. The economy has been devastated, and immense environmental damage has come, too.   Soil and air have been impacted from damaged factories, flooded coal mines, and unexploded military ordnance. For the director of these parks, Sergey P Natrus, the war caused his dominion to be split in half. Of the five, just two are now under his control – Kleban byk and Kramatorskiy. The rest are either split by or lie across the contested border.

It is hard for him to say what the impact on wildlife has been from such violence, but the reduction of men in the region, the fact that increasingly locals are fearful of searching forests for berries and mushrooms, the banning of hunting in the red and grey zones that buttress the frontline, and the mass exodus of people, have all led to an unexpected outcome. The region has rewilded. 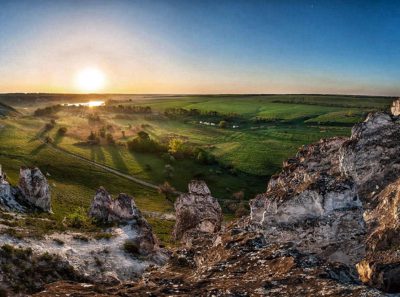 Yes, initially, the sound of gunfire and shells caused wildlife to flee certain zones.  But now animals are back in force.  Wolves, roe deer, wild boar, rare marbled polecats, endangered steppe marmots, swans, eagles and kites have all been reported on the increase. Reports, too, of great white pelicans coming back to the region have been made. It’s the first time in over a century and a half for such sightings. Greater black-headed gulls have also been seen, their breeding grounds free from poachers and disturbing tourists.

“Nature steps forward in places where people leave,” Sergey says. “And in places such as the red or grey zone where it is most dangerous, we are seeing nature grow the fastest.”

Not every aspect of nature has benefited, of course. Trees were burnt, some wildlife undeniably killed. Kamyani Mohyly’s colony of Dalmatian pelicans — the only one in Ukraine — was reportedly devastated by explosive violence and fishing.  Locals talk of soldiers using hand-grenades to secure clutches of fish, while troops use their night-vision googles and sniper rifles to take down deer and boar. Environmentalists have even brought a court case against the army for turning part of the Meotida National Park into a firing range. In addition, years of scientific research data has been lost, environmental projects have been profoundly disrupted, and now Sergey’s three parks remain across the border, unhinged from any national Ukrainian development projects.

The rise in wolves has been the one thing that has stoked the greatest fears, of course. Farmers want to hunt these animals, saying that they have taken chickens and puppies.  People fear sending their children down to rivers to swim alone.  But when you ask for details of such attacks, few are given. The bigger concern for Sergey is that of the increase in wild dogs. Left alone by fleeing owners, these mongrels have bred and multiplied. Mayors of small towns across the region complain of feral packs, and Sergey’s department has secured over 22 million UAH (almost $1 million USD) to establish 20 sterilisation centres through his region, aiming to stem the rise in wild puppies. 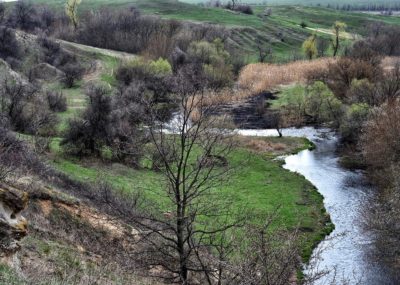 But unlike many in this region, Sergey seems almost upbeat. Tourism, he claims, is up in the two national parks he now oversees. And while he does not have the data to hand, in Kleban byk he claims they are seeing as many as 12,000 visitors a day at the height of summer holidays and 200 in Kramatorskiy.  What he does not have data on, though, is the increase in wildlife, or the impact of the war on the ground soil and water in terms of explosive remnants of war contamination. And it is hard to tell if this lack of data comes from the conflict’s impact, or a more systemic failure in oversight and governance.  He plans to put monitoring devices into his existing parks to monitor pollution levels, he claims, but undeniably, the war has put such reforming ideals onto the back-burner.

The rise of wildlife, though, is a surprising good news story from a region where grief and sadness is in no short supply. And perhaps it serves as a morality tale for the future – a note that it often takes the horror of war to remind how harmful man can be on their own natural environment.  And, if any lesson is taken from this observation, perhaps it is that if a decent peace is to be secured here, it should be one that seeks to preserve its ancient lands in years to come, not to exploit them.