Since the first suicide bombing incident that killed the Tsar of Russia in 1881, the world has witnessed an increased number of suicide attacks, most significantly in recent years. In 1976 there were no reported suicide bombings, but in 2016 there were 469 attacks across 28 countries.  To put it another way, in the last 5 years, 40% of those killed by suicide attacks have died.

The following three case studies illustrate the scope, depth and complexity of the dynamics between attacks and counterattacks when looked at from a micro level. These examples demonstrate that the phenomenon of suicide attacks as acts of retaliation and revenge is seen in incidences worldwide, spanning from the tribal dynamics of the Taliban in Afghanistan to transnational terrorism movements mobilising from the Middle East into Europe and to personally motivated acts of revenge in East Africa.

Common to them all, though, is that they underline the vicious spiral of attacks and counterattacks and make one question whether military action is the most efficient counter-terrorism strategy.

“The Perfect Revenge” – Peshawar School Attack, Pakistan, 2014
In December 2014, militants from the Pakistan-based militant Islamic group Tehrik-i-Taliban (TTP), carried out one of the most lethal attacks in the country’s history. Seven militants, including target killers and suicide attackers, entered the Army Public School in Peshawar and killed 141 people – 132 of them children. A high number of the school’s students were children of Pakistan’s military personnel. The attack was carried out by the Fazlullah faction of the TTP. 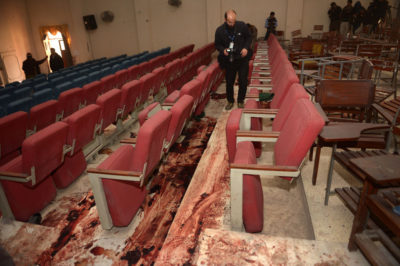 Prior to the Peshawar attack, drone strikes led by the CIA and Pakistani military had eliminated a number of high ranking TTP members, including the group’s founder and leader, Baitullah Mehsud, in 2009 and his successor, Hakeemullah Mehsud, in 2013. These attacks created a power vacuum that allowed regional TTP leaders to act more independently and autonomously. The result was the splitting of the TTP into two main groups, one led by Omar Khalid and one led by Fazlullah.

The two rival factions sought to ‘outbid’ one another by endeavouring to unleash the deadliest attack possible in retaliation. The Peshawar school massacre by the Fazlullah faction was the climax of this outbidding. The attack was framed as ‘revenge for months of airstrikes on tribal-area strongholds by Pakistan warplanes and CIA drones.’

The Army Public School proved a favourable target because it was home to a number of children of Pakistan’s military personnel – members of an institution who were ‘behind the massive killing of our [TTP] kids’ –and provided easier access for seven heavily guarded militants than other potential targets. The attack was later referred to by the Taliban as ‘perfect revenge’.

Based on years of studying the dynamics and so-called ‘codes of honour’ among Pakistani militants and tribes, American researcher Harrison Akins sees in the attack the embodiment of the idea of retaliation – a retaliation directed against the Pakistani military and their cooperation with the US. Akins points to the commonly found opinion amongst tribes in Federally Administered Tribal Areas (FATA) that ‘our families get killed by the militaries, so we are going to kill the families of the militaries as well.’

Following the Peshawar school massacre, Pakistan’s chief of staff, General Raheel Sharif, tweeted that ‘massive air strikes’ had been launched in a tribal area near Peshawar. The intensification of Pakistani military operations in the wake of the attack has had the unintended effect of unifying the factionalised TTP, rejuvenating the extremist group. Thus, the circle of violence continues.

A personal act of retaliation, Mogadishu attack, Somalia, 2017
On 14 October 2017, Somalia witnessed the worst terrorist attack in the East African country’s history. A truck filled with explosives detonated at a busy crossroad in Mogadishu in close proximity to hotels, government buildings and restaurants. The detonation combined with a nearby fuel tank, creating a ‘massive fireball’ which killed at least 512 people, injuring more than 300.

Despite not officially stating the attack was their responsibility, it is widely believed that the al-Qaida-affiliated group Al-Shabaab was behind the attack. Public opinion within Somalia identifies Al-Shabaab as the perpetrator.

The man behind the attack, a former soldier of the Somalian army, was believed to have acted in revenge after a failed US-led operation on his hometown, Bariire, in August 2017. Located 30 miles from Mogadishu, Bariire is considered to be an Al-Shabaab stronghold. The August raid killed at least 10 civilians and triggered the local tribe to call for retaliation against the government of Somalia and its allies, most notably the US.

This call for retaliation, which ultimately led to the deaths of hundreds of innocent civilians in Mogadishu, marks a blowback of the US’ counterterrorism strategy in Somalia. US-led operations began under the Obama administration and included the death via air strike of Al-Shabaab’s leader, Ahmed Godane, in 2014. Since the Trump administration has taken over, drone strikes have seen a notable increase, with the highest spike evident since September 2017.

Not only has the US in recent years increased its drone campaign against Al-Shabaab in Somalia, it has also adopted a looser set of rules for the authorisation of strikes based on the critical condition that the US believes Somalia to be in. A less restricted aerial campaign puts civilians at a greater risk of harm, hence increasing Somalian extremist groups to call for revenge.

The Mogadishu attack has demonstrated that Al-Shabaab is regaining strength despite the increased operations against Islamic extremism in Somalia. The group has reacted to these realities under its new leader, Ahmed Diriye. The revenge narratives evident in the Mogadishu attack – being a response to the Bariire raid – help to enforce and stimulate the resurgence of Al-Shabaab.

The spiral of violence reaches the UK – Manchester bombing, United Kingdom, 2017
On 22 May 2017, American pop singer Ariana Grande gave a concert in front of thousands of people at a stadium in Manchester. The concert turned out to be one of the most brutal terrorist attacks in British history.

22-year-old ISIS supporter, Salman Ramadan Abedi, detonated a shrapnel-laden homemade bomb as the audience was leaving the stadium, consequently killing 23 people, including himself, and wounding another 139 – more than half of them children.

The following day – on the 23rd May – ISIS claimed that the attacker was ‘a soldier of the Khalifah’ [the Caliphate of the Islamic State] calling the attack a ‘response to their [the West’s] transgressions against the lands of the Muslims.’ Libyan-British Abedi had allegedly received training by ISIS in Syria in the months preceding the attack and had long been under investigation by European intelligence bodies. The attack was however categorised as a ‘lone wolf’ attack.

Abedi’s sister, Jomana Abedi, later told the Wall Street Journal that she believed Abedi’s act was motivated by revenge for Muslim children who had been killed by the US-led coalition in Syria, saying that ‘he saw the explosives America drops on children in Syria, and he wanted revenge. Whether he got that is between him and God.’ Jomana Abedi went on to add that ‘he did what he did in revenge, and in love for Islam.’

Only two weeks after the massacre in Manchester, on 3 June, three ISIS supporters carried out an attack at London Bridge, killing seven people by stabbing them with knives and by driving a van into crowds on the pavement in the heart of Central London.

ISIS claimed responsibility for the attack and said that it was carried out in revenge for an RAF laser-guided Paveway missile with the words ‘With Love from Manchester’ written on the side of it. The missile, which was bound for Syria as a part of the RAF’s aerial campaign against ISIS, indicated a clear message of revenge by the British people to the ISIS fighters in response to the Manchester bombing.

The connection between the London Bridge attack and the missile ‘greeting’ was detected on social media, where ISIS shared an image of the missile with the caption ‘This is your Merchandise and tonight we responded..,’ claiming that the seven London Bridge victims were in direct retaliation for the greeting sent by unidentified army personnel.

A vicious circle of violence
These case studies clearly illustrate how the endless exchange of violent attacks between state actors and militants fuel each other, leading to a rather complex ‘chicken or the egg’ situation. One thing, however, seems clear: despite the complexities of basing counter-terrorism strategies on airstrikes, the West keeps giving the radical Islamist reasons to fight back.