The Peace and Security Council (PSC) of the African Union (AU), dedicated its 859th meeting, held on 17 July 2019, to an open session on the theme: “Protection of Civilians from the Use of Explosive Weapons in Populated Areas (EWIPA)”. 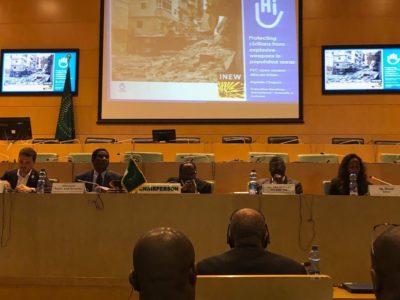 In total, 25 African States attended the session, in addition to many other permanent missions and international organizations. Several PSC members (Nigeria, Angola, Morocco, Algeria, Togo among others) and other African States like Mozambique, spoke highly about the initiative to develop a political declaration to better prevent civilian harm from the use of EWIPA and called for all African states to join the upcoming high-level conference in Vienna.

Humanity and Inclusion, a member of the International Network on Explosive Weapons, presented on civilian harm from the use of EWIPA. Other States and organisations such as Austria, Ireland, Norway, the ICRC and the UN also gave strong statements supporting diplomatic work towards a political declaration.

Following the meeting, the AU Peace and Security Council issued a press statement, expressing support for “an inclusive consultation process to develop a political declaration that addresses the impact of explosive weapons with wide-area effects in populated areas“.

The Council has also commended the Republic of Mozambique for co-hosting the Maputo regional conference and its subsequent communiqué, and more importantly has agreed to convene an new open session, before October 2019, “bringing together all Member States to promote active African participation in the global process of elaborating a political declaration, and to agree on a set of principles and proposals that will guide Africa’s engagement during the upcoming meeting in Vienna, Austria on 1 and 2 October 2019“.

This statement, the first of its kind from a continental institution on EWIPA, comes at perfect time ahead of the Vienna conference and the official launch of the political negotiations on the political declaration.