Before the war in Ukraine in 2014, the government had few plans for the main hospital in Popasna, a city of 20,000 in the Luhansk Oblast of eastern Ukraine. Investment had dried up. The grey brutalist concrete exterior was slowly crumbling under the hard winters that sweep this region. Government plans were to push all patients to the larger hospital in Pervomaiske, 15 kilometres away, and so repairing something that was already broken seemed pointless.

Pervomaiske, though, now sits across a fiercely contested border.  At night you can hear the machine-gun fire in the darkness, the noises of a frontline still active five years into a war that drags on and on.  In 2014, when the distance between Popasna and Pervomaiske was filled with landmines and Grad rocket fire, barbed wire and destroyed roads and bridges, the ‘Communal Institution of Papasna Central Regional Hospital’ became an urgent lifeline to the civilians caught up in that storm. 50 locals died. Over 150 were wounded – around 20% of whom who have life-long injuries.

Dr Alexandr Vladimirovych Kovalchuk presides over the hospital that was to be reborn from that crisis.  At 63 years old, this general surgeon exudes a firm optimism that is rare in these parts. He is matter-of-fact about what happened here, but has a dogged pragmatism that comes from a man whose early medical career was forged treating wounded Soviet servicemen from Afghanistan. 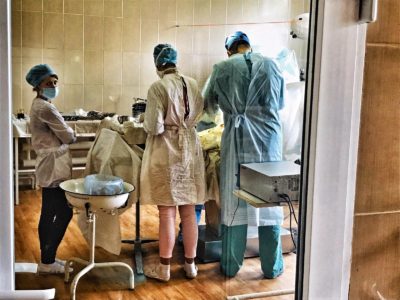 Today, he oversees 540 staff, including 102 doctors and twice that number of nurses. He has secured funding and equipment from regional and central government, as well as donations from the Swiss, Norwegians, French and Germans. It is aid that now caters for a population of over 77,000, comprised of locals and internally displaced people.

Of course, the war brought its own challenges.  While the fighting has calmed down, he still sees wounded soldiers coming through his doors.  And there are times when farmers accidentally set off improvised explosive devices in the fields surrounding. But the main legacy is a constant one: everyone is still on edge.

“If you slammed the door,” he jokes, “my secretary would dive under the desk.” The bad memories of shell-fire remain.

It’s a stress that reveals itself in numerous health issues. There are those with post-operative arthritis from the wounds they received four, five years ago. There has been a rise in cardio-vascular diseases.  And, above all, there has been a spike in diabetes. They did a comparison with another hospital in central Ukraine and found that, in a similar cohort, their hospital had ten times the number of diabetes-related amputations.

The war has weaved a spider’s web of complexities in terms of health care provision.  The demographic profile of his patients has gotten older too.  And not just his patients.  40% of his staff are over 60 years old.

“The young leave for Europe or Russia,” he says. “And with that you see a rise in age-related diseases here.  Atherosclerosis, Parkinson’s, Alzheimer’s, strokes.” 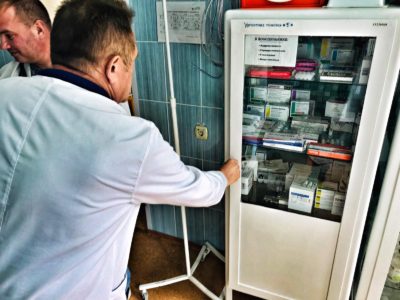 His staff describe the impact that stress has caused in more detail.  The resident gynaecologist describes early-onset menopause, disrupted menstrual cycles and, compared with the western Ukrainian hospital she just came from, a high number of cervical, uterine and ovarian cancer cases. Her husband, the hospital’s urologist, says that he sees conditions here that would have been caught much earlier in the peaceful region he moved from.  Abnormal prostrates, impotence, incontinence are all commonplace. And, with the rise in young soldiers here, too, he has seen an increase in diseases: HIV, chlamydia, gonorrhoea.  They may have received 14,000 condoms from one generous NGO, but it isn’t enough to stop the spread of sexually transmitted diseases that almost always accompanies a war.

Despite these challenges, though, those at this hospital are far from depressed. Dr Kovalchuk has overseen a transformation of this centre, and it is clear talking to his staff that the investment has stopped the hospital from being dragged into despair.

While the legacy of years of neglect can be seen at every turn, there are new windows and doors to all the wards. Toilets have been equipped to accommodate wheelchair users.  New tiles line the operating theatre, and the ward beds are new, too. The regional administration gave 12,000,000 Ukrainian hryvnia (just under USD $500,000) last year alone for renovation and improvement.  On top of that, about USD $350,000 was given in donated medical equipment by countries such as Germany and Switzerland.

New ventilators were purchased. A digital x-ray machine was given. New testing devices were sent over. Today, cabinets are filled with medicine that they never had access to before the war. The only thing that he feels that they don’t have is a CT scanner, but he lives in hope.

The kitchen bloc has been entirely redecorated, too. “If you had seen this place before the war, you’d have cried,” says the head cook, Irina.  “You’d have thought that this place was just ruins.” Now, she can feed the entire hospital with nourishment sorely needed.

A new morgue has been built, along with a hospital waste incinerator.  And a new lift is going to be installed in a few months.  Ideally, they want the entire renovations to be finished in the next two years.

It’s hard not to be impressed.  This is aid in action. A beacon of hope, perhaps, for a region brought low by explosive weapons – something that only survived the fire, but was born from it.