Agriculture in Afghanistan is big business. Today, it accounts for 25% of Afghanistan’s GDP, and is the second largest sector of the economy after services. Even in our current world of urbanisation, the majority of the population still live in rural areas, and agricultural labour is critical for livelihoods. Across the country, agricultural work employs some 40% of the total labour force and more than half of the rural workforce.

However, despite its seeming importance, present day agriculture in Afghanistan is a shell of its former self. Its production stands at half that of its pre-1979 level. Four decades of war have severely hampered what is considered to be ‘the backbone’ of Afghanistan’s economy.

In the 1970s, Afghanistan was a leading international supplier of horticultural products; with earnings from the sector accounting for 48% of total export revenues. During this period, annual exports averaged around US$600 million, of which 30% was dried fruits and 70% fresh fruits. This landlocked country in Asia was almost self-sufficient in wheat.

But following its invasion by the Soviet Union (1979-1992), and the US-led coalition (2001-present), not to mention its own civil wars, the agricultural sector has contracted, as its share of GDP fell from 71% in 1994 to 24% in 2013. During this time, Afghanistan’s wheat and seed industry was completely destroyed. Today, farmers are dependent upon imports of both wheat and wheat seed.

The Importance of Agriculture

The income from agricultural production acts as a source of livelihood for the majority of the estimated 19.3 million people that live below the poverty line in Afghanistan. Indeed, it is fair to say that its decline in some areas is not proportionate to its necessity. Rather, its decline reflects the dire situation the country finds itself in.

The rehabilitation of the agricultural sector, especially horticulture, is vital for Afghanistan’s recovery. Besides providing food security, a healthy agricultural economy fuels socioeconomic development, helps ameliorate poverty, and reduces violence. The sector, therefore, has been a principal part of the peace process, especially in light of the fact almost 70% of Afghans perceive poverty and unemployment as the major causes of conflict. Improving the agriculture sector for job creation, sustainable development, food and nutrition security, and women’s economic empowerment is, then, vital for the long-term security of the nation. 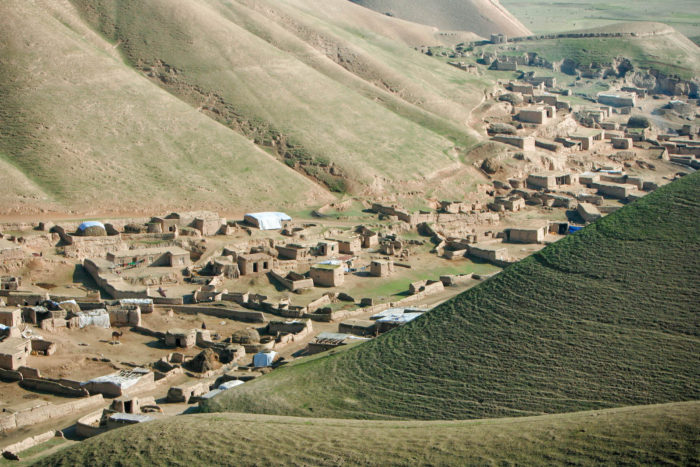 A village in Faryab Province, Afghanistan, in 2009.

Despite efforts, however, to reform agriculture in Afghanistan, progress has been greatly obstructed by the reverberating effects of explosive violence. Landmines, especially, have had a long-lasting detrimental impact on the sector.

For 40 years, landmines have severely affected Afghanistan. Between 1978 and 2017, there have been 30,980 known casualties from mines and unexploded ordinance (UXOs). In 2017 alone, 797 people were killed and 1,503 injured in Afghanistan from these legacy weapons. 55% of these were children. In the short term, landmines and other explosive remnants of war kill and maim people indiscriminately. In the long term, they seriously undermine the country’s economy and food security, slowing Afghanistan’s recovery – whilst the loss of agricultural production and impacted grazing lands, in turn, fuels malnutrition, ill health, and increased poverty.

They have also, clearly, destroyed lives. According to Halo Trust, the demining NGO, when Fakrudin, an internally displaced person by the conflict, finally returned home to his village of Sayelau, what greeted him on his return “was not friends and family, but landmines and unexploded items.”

Soon after Fakhrudin returned, he was severely injured by a landmine. He couldn’t work for a year and was forced to borrow money and food from his neighbours to support his family. Fakrudin’s struggles are illustrative of that of many in Afghanistan. On average in 2017, 171 Afghans lost their lives or were injured by landmines, ERW and improvised mines each month. As a result, countless rural Afghans fear a similar fate to Fakrudin’s.

Explosive Weapons and Land Use

Their fear is justifiable. Landmines have been planted indiscriminately over much of the country. This impacts arable land, including farms, grazing areas and irrigation canals, as well as residential areas, such as roads or footpaths, both in urban and rural areas. Today, across Afghanistan, almost 1100 square kilometres soil remains contaminated by mines, improvised explosive devices (IEDs) and other explosives, including artillery shells, mortars, and cluster munitions.

Such contamination clearly depreciates the economic value of the land. For instance, it takes years to establish a productive fruit tree orchard, an important component of agriculture in Afghanistan. However, the leaching of ageing landmines threatens this process by impacting the fertility of agricultural land, through reducing soil nutrient levels.

Furthermore, due to the perception of landmine risks, land is often neglected.  This causes, in turn, long-term problems such as the growth of unwanted vegetation, like brambles, trees and vines, or the establishment of insects considered invasive. These issues steadily increase the cost and difficulty of restoring land to a fertile condition. The removal of unwanted vegetation, roots, weeds or insects, and the restoration of nutrient levels in the soil take a considerable amount of time. In addition to this, the over-use of remaining uncontaminated land such as overgrazing and repeated high intensity cropping also causes long-term damage.

Based on the expected projection of production, the World Health Organisation suggests that, without mines, agricultural production could increase by 88-200% in different regions of Afghanistan.

Other challenges exist. In addition to laying landmines, the Soviet Air Force also bombed irrigation networks, villages, fields, livestock structures and orchards in order to destroy the Mujahedeen “support structure”. Some of these water irrigation systems remain damaged to this day. Efforts have been made by MAPA to repair such harm, but these efforts were thwarted by the resurgence of conflict in 2001, which saw an increase in mine laying, shelling and aerial bombardment. 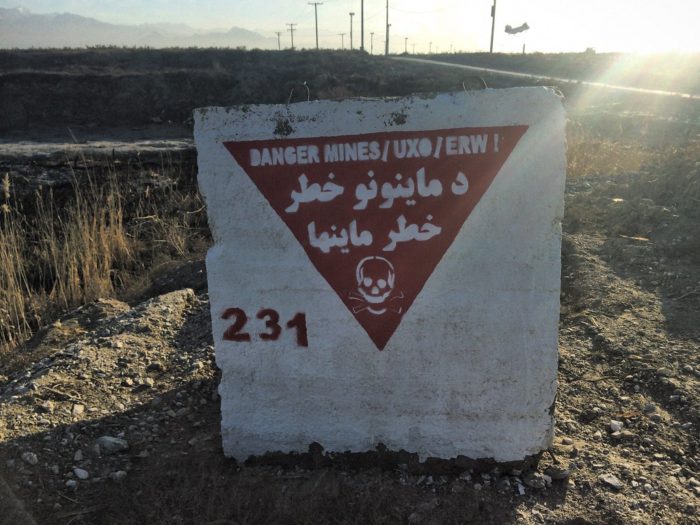 In addition, the widespread presence of landmines and IEDs on conventional transport routes has meant that, for many years, militaries fighting under the U.S. coalition banner had to find alternative routes for their tanks and armoured vehicles. As a result, convoys often drove across open fields, harming crops and even destroying existing infrastructure. For example, in 2010, during Operation Dragon Strike, U.S. troops from the 2nd brigade, 101st Airborne Division advanced from Highway 1 to the Arghandab River. In doing so, the U.S. military destroyed hundreds of Afghan civilian homes, farmhouses, walls, trees, fields and buildings using explosives and bulldozers. This left people homeless, and caused enormous difficulties for the farmers. One Afghan farmer Haji Jilal complained at the time to the broadcaster PRI: “You bulldozed some of my trees, they’re blocking the canal, now we can’t get water to the orchard.”

According to a former tank commander that spoke to AOAV, troops have general principles to avoid the alienation of the indigenous population whilst enacting counter-insurgency operations. Therefore, it is expected that soldiers take diligent care in not harming crops and destroying agriculture. However, the operation at hand and the protection of soldiers always take precedence. As reflected in the response of military officials during Operation Dragon Strike, “in order to clear a safe path for the troops, there was no choice but to destroy Afghan property.”

Fear of the Air

As well as the dangers from explosive violence in the ground, farmers also fear threats from the air in the form of drone strikes and bombing. In September 2019, a U.S. drone strike killed 30 pine nut farm workers. The workers, after a busy day’s work, “lit a bonfire and were sitting together when a drone targeted them,” tribal elder, Malik Rahat Gul told Reuters. The owner of the pine nut fields, Haidar Khan, said that about 150 workers were there for harvesting. A survivor of the drone strike said about 200 laborers were sleeping in five tents pitched near the farm when the attack happened.

“Such mistakes cannot be justified. American forces must realize (they) will never win the war by killing innocent civilians,” said Javed Mansur, a resident of Jalalabad city. Scores of local men joined a protest against the attack as they helped carry the victims’ bodies to Jalalabad city and then to the burial site.

Attaullah Khogyani, a spokesman for the provincial governor, said the aerial attack was meant to target ISIS militants, who often use farmlands for training and recruitment purposes, but had hit innocent civilians instead.

Meanwhile, the war continues to take its toll. The United Nations says nearly 4,000 civilians were killed or wounded in the first half of 2019 alone.  This includes a large increase in casualties inflicted by government and U.S.-led foreign forces. AOAV recorded 1,342 civilian casualties from explosive violence alone in the same period, based on English-language news sources, including 209 casualties from airstrikes.

Other unexpected reverberations of explosive violence have been witnessed on Afghanistan’s agriculture.

On the 9th October 2019, a UN report stated that U.S. air attacks on alleged Taliban drug labs inflicted 39 civilian casualties, including 30 deaths. 14 children and 5 women were among the victims. This offers a brief insight into the narco trade that has blossomed in Afghanistan.

Since late 2017, U.S. forces have bombed sites believed to be used for processing drugs as part of the effort to cut off funds to the Taliban. And while 17 of those casualties were working in a methamphetamine lab, it is opium production that is the predominant narcotic in Afghanistan.

Today, opium cultivation is increasingly overtaking traditional agriculture. Afghanistan is the world’s largest supplier of opium, and for some Afghans, the poppy has become a crucial element of their livelihood. Many engage in this drug’s cultivation, work on poppy fields or are involved in the illicit drug trade. In rural areas, about 35% of village headmen reported that at least some villagers cultivated opium poppy in 2018. The farmers, however, do not benefit the most from the opiate economy. One UNODC village survey uncovered evidence that groups, including the Taliban, fund their activities by collecting ushr, a tithe of about 10% on agricultural produce. Taxes are also collected from drug smugglers and the laboratories converting opium into heroin. Estimates of the Taliban’s annual share from opium production vary widely, from $100m-$400m. Overall, there has been a continual growth in opium poppy cultivation, this despite the U.S.’s spending of $1.5m a day since 2001 in fighting the opium war in Afghanistan.

In addressing these challenges, the revival of agriculture and the transition to legal crop development is crucial. This will weaken the power of non-state actors and have a significant impact on the global drug trade. And, in doing so, those reliant on agriculture will no longer be a target of the U.S.’s ‘war on terror’.

The effects of landmines and other explosive remnants are felt down the generations, causing lasting pain to the inhabitants of Afghanistan and significant damage to the agriculture sector. This is particularly frustrating considering Afghanistan’s huge potential to become a world leader in horticulture. Instead, vast amounts of arable land remain or are becoming unusable, while the increasing boldness of U.S. airstrikes in the ‘war on terror’ ensures that threats to farmers come from both the ground and the sky. This makes going about their jobs of growing food to feed and support their families even harder.

From drug cultivation to unused arable land, injured or killed agricultural workers to soil contaminated by a legacy landmine threat, the agricultural communities of Afghanistan bear decades long scars of war. Much of this harm originates from explosive violence. And so, while the priority of nations should be ending the use of explosive weapons with wide area effects in towns and cities, where over 90% of those killed or injured from such use have been civilians over the last decade, the impact of explosive violence on rural areas cannot be ignored.

From tilled field to pasture, irrigation waterways to dirt tracks, Afghanistan’s countryside remains a ticking time bomb. Without investment and an ending of hostilities, that bomb remains dangerously active.