In the last eight years, the country worst impacted in the world from explosive weapons has been Syria.  In light of this, Action on Armed Violence (AOAV) has undertaken research into the reverberating effects of violence there to better understand the long-term harm these weapons cause and the challenges that lie ahead for the country. Our findings are presented here in this report. 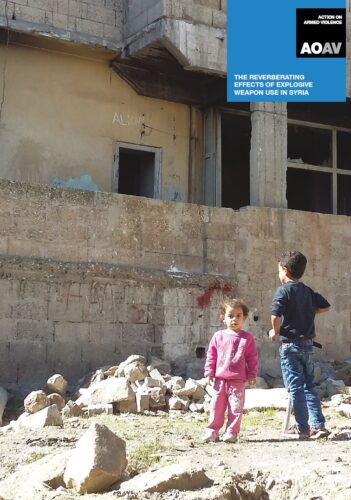 Between 2011 and 2018, AOAV tracked 79,206 casualties from explosive weapons in Syria as reported in English language media. Of these 85% (67,263) were civilians, though the true figure is probably far higher.

The use of explosive weapons in Syria has been devastating. It has destroyed key infrastructure and deprived communities of clean water, sanitation, electricity and medical care, forcing many to flee their homes and neighbourhoods. Many Syrians have suffered profound psychological harm, with interruptions to education and employment also stunting development. Explosive weapon use has left vast swathes of land contaminated, causing further casualties and preventing families from returning to their homes and using their land. Such impacts have devastating and lingering consequences for communities.

AOAV has conducted 50 interviews with academics, experts, NGOs and UN personnel, as well as with refugees and other impacted civilians. Our findings show that harm from explosive weapons will not cease when the bombing ends. The relentless bombardment of Syria over the last eight years has caused lasting harm to all areas of civilian life. Focusing on four key areas – health, economy, environment and society and culture – AOAV found: