Damage to housing in Vostochny was widespread. Local authorities recorded more than 650 complaints regarding the destruction of private property following the attack. The majority of inhabitants live in 9 or 10-storey apartment blocks – located to the west of the district – or in single-storey houses – typically in the east of the district. 76 multi-storey residential buildings were damaged by the attack, whilst 209 private houses withstood differing degrees of harm. 13 houses received ‘severe’ damage from rockets – often as a result of direct impacts – and were deemed unlivable as repairs required were too significant. The City Council provided new apartments for the residents of these houses, although this was not always possible – at least 6 of those killed in the attack were found at their place of residence.

The large proportion of Vostochny’s population living in multi-storey apartment buildings also brought about further concerns. Interviews with local residents revealed that whilst individual apartments were not always damaged, stairways were sometimes badly broken or destroyed by rockets, making apartments inaccessible until repairs were carried out.

“So when I went out from the door of my apartment, I saw that the stairs from the first floor to the fourth floor were badly damaged, like almost nothing” – Local Resident.

AOAV’s EVM records whether incidents of explosive violence cause ‘damage to location’, but news reports can often omit this information. As such, damage to location was ‘not reported’ in 30 of the 44 Grad events recorded by AOAV. However, of the 14 events in which there was information available, damage to location was recorded in all instances. Furthermore, all but one of these instances occurred in populated areas. From this information, and taking into account the wide area effect of Grad attacks, it is reasonable to suggest that when Grad systems are used in populated areas, there is an extremely high probability of damage to housing.

In eastern Ukraine, widespread damage to homes, directly inflicted by Grad MLRSs, has been well documented by IPHR and Truth Hounds. Elsewhere, following the assault on Sirte by thuwar in 2011, the International Commission of Inquiry on Libya found that almost every building in the centre of the city showed damage – typically attributable to either Grad rockets or heavy machine-gun fire.

In Syria, Amnesty International recorded significant damage to buildings during Grad MLRS attacks on Douma in June 2015. In one case, a residential building had been razed to the ground by Grad fire from Syrian government forces. This is typically an uncommon occurrence given the quantity of explosive contained within a single Grad rocket.

11.1.2 – Number or proportion of cultural property damaged or destroyed by explosive weapons

No cultural property was damaged by the attack. The only cultural site in Vostochny is the gold-domed St. Vladimir’s Church which lies at the centre of the district, 100 metres from the Kievskiy Market. Although at least three rockets exploded within a 100 metre radius of the church, it sustained no damage.

There is currently no comprehensive global source documenting damage to cultural property by explosive weapons. Therefore this indicator has to be addressed on a case-by-case basis, utilising anecdotal evidence. In areas where the use of Grad MLRSs is well documented, destruction to cultural property has been recorded. For example, the International Commission of Inquiry on Libya cited that a mosque in Misrata had been directly hit by a Grad rocket during a heavy bombardment, whilst another mosque on the outskirts of Zintan was also damaged by Grad rocket fire launched from pro-Gaddafi forces later in 2011.

Four boiler rooms – run by the ‘Mariupol Heating Network’ – supplying heat to private and commercial premises were damaged by the attack. There were also several cases in which waste chutes in multi-storey apartment blocks were damaged by rockets, creating minor disruptions to waste management. Besides this, damage to service plants and installations was minimal.

Although the attack on Vostochny did not cause significant harm to service plants, there are several examples of Grad attacks damaging plants and installations elsewhere in Ukraine. In fact, on the same day as the Mariupol attack, IPHR reported Grad fire at 8am targeting a Ukrainian military base in the Village of Sartana – 7km north of Vostochny. Rockets destroyed a high-voltage power line servicing the district, and most probably caused the disruption to electricity and water that occured prior to the attack. Later in the day a Grad strike on the Ukrainian military checkpoint at Vynogradne – 3km south of Vostochny – also destroyed a high voltage power line and damaged a gas power station.

Elsewhere, the Geneva International Centre for Humanitarian Demining (GICHD) have reported cases of water mains being damaged by Grad rockets in Syria, and an example of a power station in Libya being directly targeted by a six-hour bombardment from Grad launchers, causing serious damage to two of its six turbines.

Rockets damaged 2,800 square metres of road and at least 20 privately owned cars in Vostochny, but there was no significant damage to transport networks. In terms of public transport, the district is served by a bus network – lacking the trolleybus, tram and train services available elsewhere in the city. As a result, there were no overhead cables or tracks to be damaged during the attack. Furthermore, the quantity of explosive carried by a single Grad rocket meant that cratering was not significant enough to prevent buses, or other vehicles, maneuvering down roads. 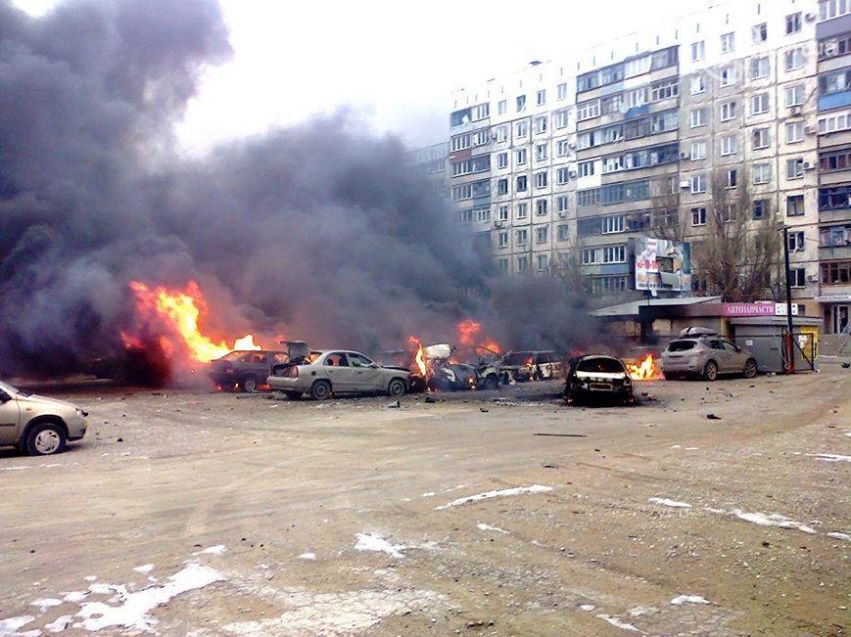 Reports rarely highlight damage to transport networks, but in some cases Grad attacks take place at key transport hubs. For example, Grads were heavily employed during fighting to capture the now totally destroyed Donetsk Airport, whilst the port of Misrata was hit with Grad fire during the siege of that city in 2011. However, perhaps the most shocking example of Grads damaging transport networks came less than two weeks before the attack on Vostochny. On 13 January, Grad rockets hit a public bus traveling on the road from Zlatoustovka to Donetsk. 12 of the passengers were killed, whilst 18 received injuries of varying severity – the bus was totally destroyed.

Heating installations damaged by the attack were quickly fixed and residents reported that electricity and water – which had been disrupted prior to the attack – resumed in the afternoon. However, the emergency services highlighted that the lack of water supply in Vostochny – most probably the cause of earlier Grad attacks elsewhere – impacted on the rescue operation, as water had to be continually collected from other areas of the city where pumps were working.

Attributing any long-term disruptions to transport, communication or key services to the January 24th Grad attack would be difficult. However, residents have highlighted how wider conflict in the region causes regular disruptions to water supplies and has impacted on the quality of rail and road services to other parts of Ukraine.

It is well reported that in other parts of eastern Ukraine, Grads have targeted and caused significant disruptions to service plants. For example, on 27 June 2015, a barrage of Grad rockets hit a water station close to the town of Toshkivka. As a result of the attack – which also damaged electrical infrastructure – the town was left without water. Later in 2015, a Grad attack in the town of Maryinka hit a water purification station, leaving residents without clean water.

“We just left. I didn’t want to wait for any payments. I just locked the shop and we just went away and for three years we went to live in Russia” – Local Resident.

The destruction of homes brought about by rockets, as well as fear of further attacks led to many citizens of the Vostochny district moving to other areas of Mariupol, other cities in Ukraine, or abroad. Interviews with directors of Vostochny’s schools revealed that it was often families with children who moved away following the attack, something reflected in falling enrollment levels in the district’s schools. However, exact displacement figures are hard to calculate. Although the Grad attack pushed many to finally move away from Vostochny, migration from the district – mere kilometers from the front line – had been occurring since hostilities began the previous year.

Furthermore, as exact population figures do not exist for the Vostochny district, but rather Mariupol as a whole, it is hard to form a clear idea of displacement caused by the January 24th attack. As many moved from Vostochny to other parts of the city, little can be drawn from relatively small changes in Mariupol’s population of more than 400,000 following the attack. The fact that the city has also been the primary destination for the majority of IDPs from the Donetsk and Luhansk regions, makes calculating changes in population even more difficult.

31 people were killed in the attack, but there were no reports of missing persons following the event. ‘Persons affected’ is more difficult to ascertain. UNIDIR defines this as those ‘who have suffered injury, illness or other health effects; who have been evacuated, displaced or relocated; or have suffered direct damage to their livelihoods or their economic, physical, social, cultural or environmental assets’. Given this definition, it would be hard to find an inhabitant of Vostochny who had not been in some way affected by the events of the 24th January. Studies have shown that incidents of explosive violence have extremely wide ranging effects, especially when it comes to mental health concerns and heightened stress. Therefore, it is reasonable to suggest an extremely high proportion of inhabitants have been impacted by the attack either through direct injury, increased stress or anxiety, or through the reduction in the social and economic capital of the district, perpetrated by damage, displacement and an environment of fear.

Globally, explosive violence is a key factor driving displacement. However, explosive weapons, or specific weapon types, are rarely the sole reason for forcing individuals to flee insecure, conflict-affected environments in search of safety. They might be the ‘final straw’, but where explosive weapons are widely used, people will flee for more reasons than just direct threat.

All cases, as recorded by AOAV, of Grad MLRS use in the past decade occurred within the context of wider conflict to some degree. Therefore, accurately determining the individual role of this weapon type in driving displacement raises a wealth of concerns. In Ukraine – the country worst affected by Grad attacks in the last ten years – there are currently 730,000 IDPs, but AOAV cannot realistically determine the extent to which these individuals have been driven from their homes by the threat of Grad attacks. Certainly the use of Grads increases the threat faced by civilians close to conflict, but they are merely a single component in a much larger web of conflict-related threats.

The same is true for the next most-Grad-affected countries, Libya and Syria. In Libya the sieges of cities carried out in 2011 brought about widespread and significant displacement. Although the use of Grad launchers in these sieges was well documented, what responsibility can be given to this specific weapon type when artillery shells and mortars were just as prevalent?

In Syria the difficulty is even greater. 10 years of devastating conflict – in which the use of explosive weapons has been unimaginable in scale – has led to 6.7 million individuals internally displaced and 6.6 million Syrian refugees worldwide. Determining the role Grad MLRSs have played in this overwhelming humanitarian disaster, would require tools far more precise than are currently available.

Next chapter: SDG 3 – Good Health and Well-Being
Read the FULL REPORT
More in this series: An Anatomy of an Explosive Weapon Attack