“I was ashamed when I heard the name. A mother gives life and this one gives death, and we call this device a mother. What is happening?”
-Pope Francis on the ‘Mother of All Bombs’ dropped by the US on suspected ISIS fighters in eastern Afghanistan.

Air-dropped bombs are extremely powerful, with a large destructive capacity when used in populated areas. In general, most air-dropped bombs cause a supersonic over-pressurisation shock wave that can blow apart buildings and kill and injure people hundreds of metres from the point of detonation. The fragmentation pattern and range is difficult to predict, but it is generally said that a 2,000lb Mk 84 bomb  has a ‘lethal radius’ (i.e. the distance in which it is likely to kill people in the vicinity) of up to 360m. 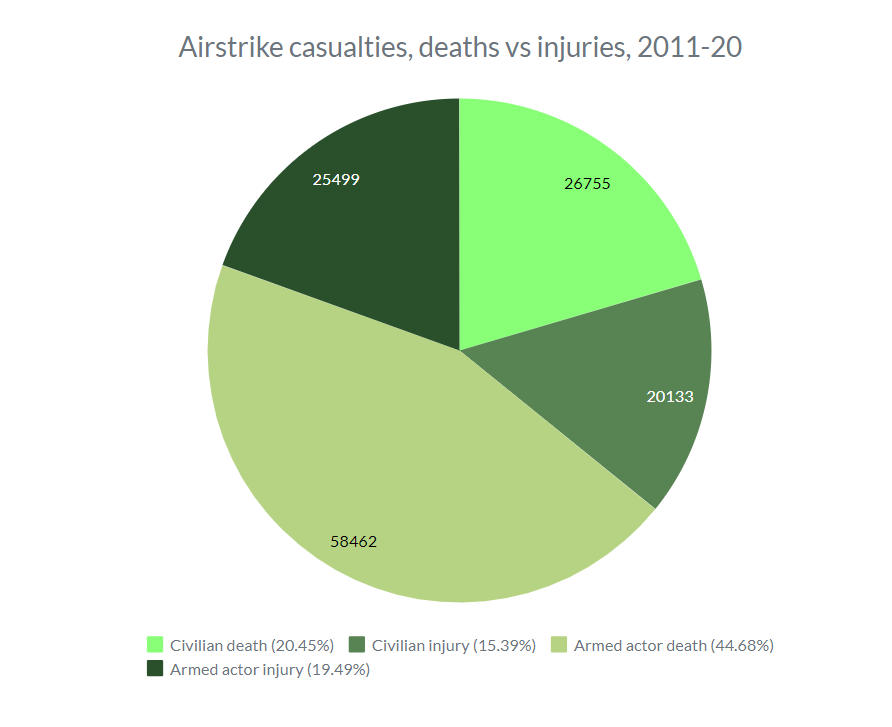 Of all recorded victims (armed actors and civilians combined), 25,499 were injured, and 58,462 were killed. This is likely to be an underestimation as casualties, particularly non-fatal ones, often go unrecorded.

There were 2,640 incidents when it was unclear whether the area bombed was populated or not. Of the casualties caused by these, 16 % (4,761 of 29,316) were civilians. These were most likely non-populated.

Similarly, in terms of total civilian casualties from airstrikes, Syria is the worst affected (26,485 casualties). Despite suffering fewer individual strikes than Afghanistan, both Yemen and Iraq have higher casualty counts – 9,209 and 5,236 respectively.

Of the five countries that have received the most airstrikes over the decade: Yemen has seen the highest rate of civilian deaths per strike (6.9), followed by Syria (6.4), then Iraq (4.1).

Airstrikes have been used in 28 countries since 2011.

However, when combined, US-led or NATO airstrikes, bombing in Afghanistan, Iraq, Libya, Pakistan, Somalia, Syria and Yemen actually killed more civilians (5,263) but had a lower overall civilian casualty count (7,393). This means American airstrikes are, on average, far more deadly, with a 71% fatality rate for civilians.

More in this series: An Anatomy of an Explosive Weapon Attack