The nature of the US airstrike, combined with the topography in Kustay means that there was no damage to housing outside of the targeted building. The house, belonging to Aktar Mohammed, was completely destroyed. After the initial explosion, a fire raged for some time. When the rescue effort was launched in the morning after the attack, a car, a tractor and two motorcycles were discovered to be destroyed. Also it was reported that all the livestock, sheeps and cows, were killed.

The nearest building to the target is around one kilometre away, so it did not suffer any damage.

Airstrikes deliver a high quantity of explosives at great velocity (the Tomahawk missile can reach speeds of up to 550mph). As such, even when they are precisely targeted, there will be significant damage to the surrounding environment. Many casualties are caused from the collapse of buildings, rather than directly from the blast.

A 2018 study, analysing the impact on civilians of the conflict in Yemen over a six month period (December 2017-May 2018) found that 2,308 civilian structures were damaged, the vast majority caused by airstrikes. Most frequently damaged were houses (856) and residential farms (551). Civilian infrastructure was also frequently impacted (98), including main roads, bridges, telecommunication infrastructure, governmental compounds, ports and airports.

The city of Sa’ada experienced by far the most airstrikes in this period, resulting in “a pattern of almost daily attacks on civilian structures in the northern governorate.”

A 2017 survey of Syrian refugees in Lebanon found that 44% of all respondents had their own homes destroyed due to the use of explosive weapons, primarily airstrikes and artillery weapons.

The United Nations estimates that 80% of the housing in Mosul was destroyed during the fighting, which included numerous airstrikes. In fact, the city suffered the 2017 Mosul Massacre in which between 140 and 240 civilians were killed by coalition airstrikes. AOAV data shows that Mosul has suffered the second greatest number of airstrikes in the past decade, 198, behind only Raqqa (212). 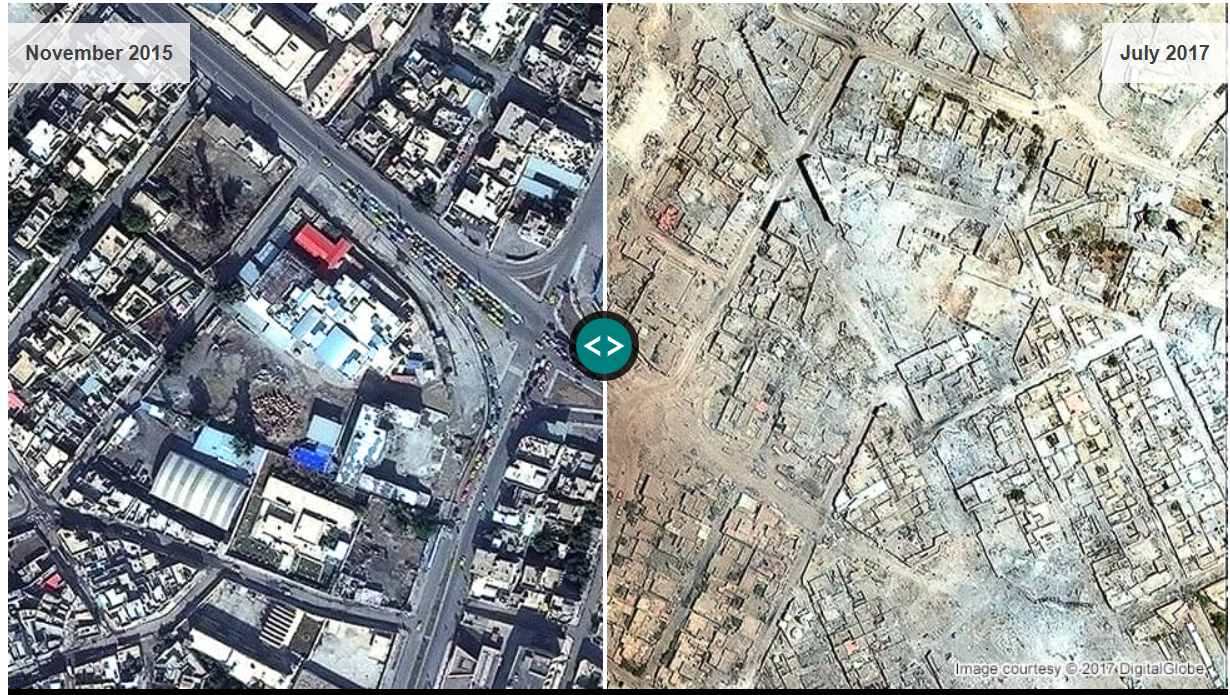 Mosul Before and After- BBC

Such devastation is not new, although perhaps has been extended by the larger quantities of explosive used. During World War Two, bombing raids on London destroyed around one million homes. At the end of the war, 40% of Germany and Japan’s civilian residential buildings had been destroyed, with seven million Germans losing their homes.

11.1.2 – Number or proportion of cultural property damaged or destroyed by explosive weapons

No cultural property was damaged by the US airstrike. However, the family that were killed had gathered that day to conduct the cultural tradition of Landay – to enjoy the meat of the freshly slaughtered sheep during the winter months. As their other sheep were killed in the airstrike, this could be considered destroyed cultural property.

There is currently no comprehensive global source documenting damage to cultural property by explosive weapons. Since airstrikes have such a wide radius of harm, they can often damage cultural sites. Yemen’s cultural property has been significantly damaged by airstrikes in recent years. In June 2015, an airstrike hit the ancient city of Marib, the largest ancient city in South Arabia. The Great Dam was struck, damaging the ancient Sabaean inscriptions on its walls. The Dam is considered a wonder of technical engineering and also appears in a verse of the Qur’an.

Given the precise nature of the attack and the underdevelopment of Kustay, there was no record of damage to service plants.

The general security situation in the area has led to an underdevelopment of infrastructure, with no access to electricity, irrigation or water pipes in Kustay. Deadly airstrikes such as the one featured in this report has also led to a displacement of people, meaning the political urgency for such development only diminishes.

Key urban infrastructure is at great risk from airstrikes, especially in conflict-ridden nations where systems may be rudimentary and more exposed to falling rubble, for example. According to the UN, Israeli air attacks in 2009 caused the widespread destruction of Gaza’s water and sanitation infrastructure. It noted that: “Eleven wells were partially or totally destroyed, four water reservoirs, 20 km of pipes, and sewage networks and pumping stations in four locations were damaged. At the household level, more than 5,000 roof water-storage tanks, 2,200 solar heaters, 500 water connections and numerous electrical pumps were destroyed. After the aerial bombing campaign, approximately 70% of the population suffered from shortages in drinking water.”

There was no direct damage recorded from the US airstrike on the farm in Kustay. However, the proximity of the village to the large Pro/Anti-government battlelines in Garmsir means there has been little to no investment in the transport network. The road to the provincial capital, Lashkar Gah, is described as “rough”, meaning the 100km journey takes at least four hours.

Airstrikes often have devastating effects on transport networks, especially on many remote locations that rely on one major route.

After a series of airstrikes damaged bridges in Sana’a in 2016, the transport for 90% of the World Food Programme’s deliveries were disrupted. Such delays can have a knock-on economic effect. The more than doubling of the journey between seaports and Sana’a has resulted in a tripling of the price of key commodities such as wheat, flour, and steel since 2015. One single airstrike on a bridge in Lahj governorate was said to have affected as many as 18,000 households.

Overall, data from the Civilian Impact Monitoring Project has recorded 91 airstrikes incidents affecting main roads that are estimated to have collectively “hindered access or restricted freedom of movement

for over one million households.”

However, the general degree of insecurity caused by the conflict, including the threat of airstrikes, has meant there has been little to no effort from either pro or anti-government forces to improve or install such facilities.

Urban services are complex and interconnected systems, meaning virtually no system can function without the others, directly or indirectly. Airstrikes on critical infrastructures result in the inoperability of energy grids, hospitals, and water treatment systems, inevitably leading to scarcity of food and functioning health infrastructures. This in turn leads to increasingly poor health conditions caused by malnutrition, low quality/absence of water, and the spreading of diseases. As such, intentionally striking health or water facilities is considered a war crime under international law.

These risks are particularly pertinent in areas already lacking access to essential services. In 2018 Saudi-led coalition airstrikes struck facilities providing most of the water to the port city of Hodeida. Three months later, a 170 per cent spike in cases of cholera was recorded by Save The Children.

The US airstrike on a family home in rural Kustay was the deadliest single event in the area this decade. But it is by no means an isolated incident of harm. Kustay is controlled by the Taliban and lies just 20km away from the battleline of Hazar Joft, in Garmsir district. The proximity to fighting, combined with underdevelopment in basic infrastructure has led many people to leave the village and move to Garmsir, the eponymous central city of the district or Lashkar Gah, the capital city of Helmand province, although no specific numbers have been recorded. Such cases of displacement, fueled by fleeing the Taliban in the countryside, has led to the urban population doubling in Afghanistan between 2001 and 2018. This in turn has created further problems. Basic services are strained and there has been a sharp rise in urban crime in the country’s major cities.

When it comes to how the area was impacted proportionally, the attack in Kustay left 22 dead and five injured. In a rural village of roughly 20,000, this means 110 killed per 100,000 population.

In terms of non-fatal effects, 20-year-old Mohammadullah, who had to pull his teenage brother, his sister-in-law and young nephews bodies out of the wreckage left by the airstrike, suffered serious trauma. “I lost my mind. I went crazy,” he told AOAV.

The inability to defend oneself against airstrikes prospectively, as well as their devastation in actuality, are key reasons why people flee regions of conflict.  A 2017 survey of Syrian refugees in Lebanon found that “when asked about the catalyst for their forced displacements, the most common reply by men and women alike is bombing and shelling (36% of all respondents).” The same survey also found that women faced particular challenges after such attacks, including resisting criminals and physical home security.

More in this series: An Anatomy of an Explosive Weapon Attack